What are these mysterious white star-like dots near MU69 Ultima Thule? Real objects near the asteroid, noise, cosmic rays, or something else?

NOTE: I think either possibility suggested below is possible, I'm not looking for arguments why one of them would be your favorite like this answer. Instead, I'm looking for a fairly conclusive answer; either by ruling one out beyond reasonable doubt, or better yet by supporting your answer with authoritative sources discussing these particular artifacts in these specific images.

For discussion of the GIF below, see:

Going frame by frame, the ones without the collective left-to-right motion often appear in one frame only, but in some cases I can convince myself (but not others) that a dot may appear in two adjacent frames, just moving in a different direction.

Which makes me wonder if it could be debris around the asteroid, or between it and New Horizons, basically anything close enough that it doesn't appear fixed on the celestial sphere.

One of the reasons for all of the occultation observations in 2017 and 2018 (see also Timing shadows from the Kuiper belt! Any news? Did it work? and Will the upcoming observations of occultation by “Ultima Thule” (2014 MU69) be of a single object, or two?) of MU69 (Ultima Thule) was to check for the possibility of a debris field around MU69 that might make a very close flyby dangerous. None were discovered but the unusual shape was suggested by the strange occultation results.

Question: What are these white dots? Real objects, noise or cosmic rays in the silicon sensor, or something else?

Borrowed from this answer to the question Will there be back-side photos of Ultima Thule? and originally from New Horizons’ Evocative Farewell Glance at Ultima Thule 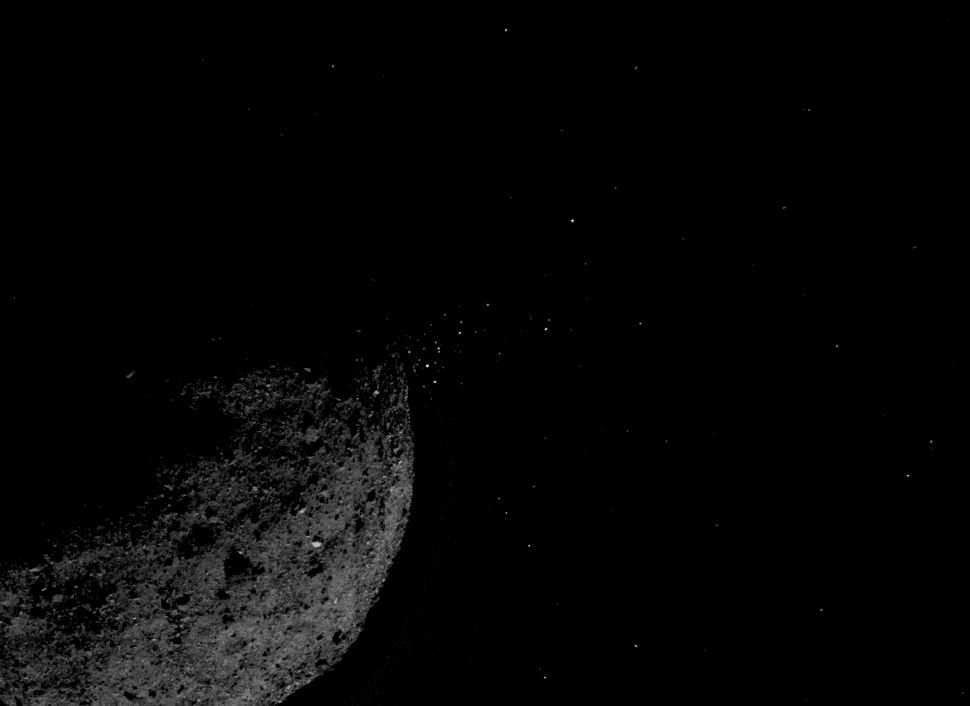 This view of the asteroid Bennu ejecting particles from its surface on Jan. 19, 2019, was created by combining two images taken by NASA's OSIRIS-REx spacecraft: a short-exposure photo, which shows the asteroid clearly, and a long-exposure version, which shows the particles clearly. Other image-processing techniques were also applied, such as cropping and adjusting the brightness and contrast of each layer.(Image: © NASA/Goddard/University of Arizona/Lockheed Martin)

Since no one has answered yet, I'd like to add some helpful information here that's too long to fit as a comment.

Note that the spacecraft was rotating backwards from what would have been desired.
I stacked the images that show Ultima Thule and re-registered them to remove that rotation.

The stars marked with dashes are the two that show (by occultation timing) that Ultima is prolate rather than spherical.

While the ultimate question of what causes the noise still stands open, this may be helpful towards that end. 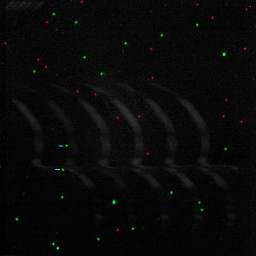 17
Will there be back-side photos of Ultima Thule?
6
Timing shadows from the Kuiper belt! Any news? Did it work?
4
Does JPL's Horizons have better MU69 state vectors for the New Horizons flyby somewhere?
4
Will the upcoming observations of occultation by Arrokoth (2014 MU69) be of a single object, or two?
4
How is flyby distance estimated?
3
Farthest distance to a solar system object that's been determined by spacecraft transponder?

12
Will New Horizons seek a third target?
6
Timing shadows from the Kuiper belt! Any news? Did it work?
4
Will the upcoming observations of occultation by Arrokoth (2014 MU69) be of a single object, or two?
9
Explanation of weird values in New Horizons data?
27
Why no recent information about or photos of Ultima Thule?
3
What are these two little valve stem-like projections from the Northrop Grumman STAR 15G upper stage rocket motor? Why doesn't the STAR 20 have them?