concentrating starlight with mirrors for photovoltaics in deep space

would it be feasible to use mirrors to concentrate starlight in order to produce efficient solar panels in interstellar space? could we produce enough electricity to provide ongoing propulsion?

At first about concentrating sunlight. The Sun is a star like many others, but it is very close to Earth.

The maximum distance of Pluto to the Sun is about 50 AU, that is 50 times the distance of Earth to the Sun. You would need a mirror with an area of 2500 square meters to receive the same energy from the Sun as a solar panel of 1 square meter receives in Earth orbit.

But Pluto is just in the backyard of our solar system. The mirrors needed for interstellar space would be incredible huge and should be aimed to the Sun very precisely. Outside the Oort cloud at a distance of about 200,000 AU, that is the border to interstellar space. The mirror size would be 40,000 square kilometers, 200 by 200 kilometers to get only the power to a square meter at 1 AU distance.

Now about the concentration of starlight.

Starlight is extreamly weak, at the Earth about 100 million times weaker than Sunlight. But a mirror with an area of 100 square kilometers would not help. Starlight is not from a single tiny spot but from incredible many stars spread over the full sky and could not be concentrated by a huge mirror. Only a very small area of stars may be concentrated by an optical mirror to a small solar panel.

Solar concentrators have been used on spacecraft, for collecting sunlight. More info below.

Until now, no mission outside Jupiter's orbit has used solar panels. The first solar-powered Jupiter mission (Juno) used large solar panels instead of combining concentrators with a smaller solar panel.

Saturn orbits at ~10 AU. So with the current state of the art, sunlight at 10AU is not bright enough to make solar panels (with or without concentrators) cheaper than an RTG. At Saturn, sunlight is 2.5 million times brighter than starlight.

The tradeoff between solar panels and RTG is mainly because of weight constraints, I suspect: to launch a spacecraft to e.g. Saturn requires a large amount of delta-V which translates into an expensive launch that puts a tiny spacecraft atop the most powerful rocket we can find.

This makes mirrors a hard sell: you'd have to build a good mirror that is lighter than a solar cell. If mirrors and solar panels are the same wight, you can either carry 2 solar panels or 1 solar panel and 1 mirror of the same size as the panel.

Starlight is more or less isotropic. When you add a mirror to a solar array, you also block the light from the stars behind the mirror. 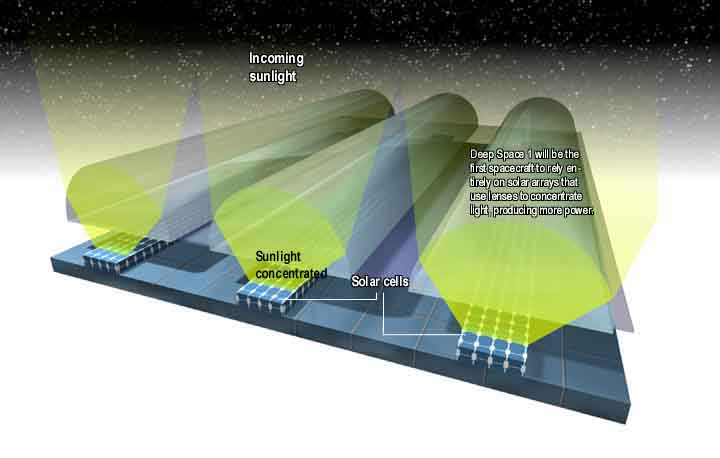 Other missions (e.g. Dawn, which used the same type of ion engine as DS1) have used ion engines without solar concentrators. As you can see, the concentrators add a lot of material, so it may be cheaper to just install a bigger array.

You can calculate that quickly;

If your farthest reflector is 50 kilometers away from your 1 meter solar panel and you want to illuminate your panel uniformly for good electrical performance, you'll have to have all your reflectors pointing with an accuracy of a microradian, or about 0.2 arcseconds, which is mind-bogglingly difficult.

Here are two ways to address that:

Not the answer you're looking for? Browse other questions tagged interstellar-travel or ask your own question.

2
Why did Deep Space 1 use solar concentrators?
1
Can a solar mirror increase an ion engine 's output?

19
What limits the speed of space probes currently?
9
Where could you go in a 20km iron asteroid?
1
Cyclotron engines as a means of thrust for interplanetary travel?
2
How to go about calculating the size and energy requirements for a space-based linear accelerator or railgun to accelerate small probes?
2
Does SETI perform search of extremely low bandwidth signals?
4
How to move in space with just solar panels or without them?
6
Time to reach interstellar space
18
How serious is the problem of interstellar dust for interstellar space travel?
2
Of all propulsion devices that could reach near-C speeds, which one is closest/most practical?