What is crossrange and downrange for an entry vehicle?

I have been searching the terms online but still can't get a more intuitive understanding. If you could refer me to some website, book or if you could offer me an explanation I would really appreciate it! Thanks! 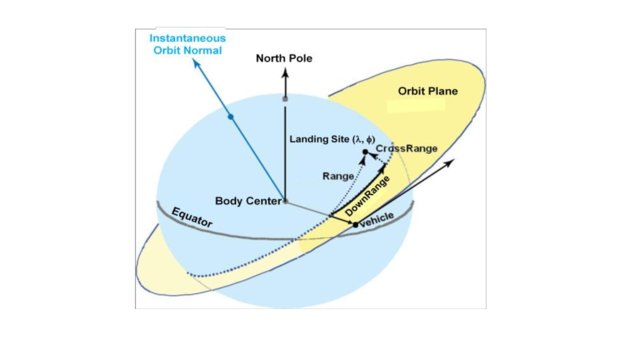 Crossrange comes into play when you make a turn, and you deviate from your orbit. It's the distance between the spacecraft and the path of its original orbit. 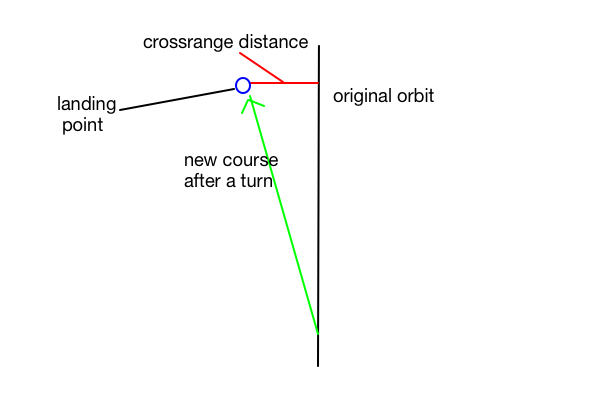 My own image, it's a top view of the original orbit and the effect of making a turn early in the reentry trajectory.

The Shuttle was capable of a large crossrange distance on reentry: they wanted to be able to land ~2000 km away from the orbital path. This meant they could launch from Vandenberg in California into a polar orbit, make 1 orbit and then land back in California. That 1 orbit took 90 minutes, in which the Earth rotated by ~2000 km, so a downrange landing would put the Shuttle in the Pacific, 2000 km off the West coast.

Not the answer you're looking for? Browse other questions tagged reentry entry-descent-landing or ask your own question.

6
Re-entry Dynamics
2
If you swam towards Earth from Space would there be a point when you started falling?
10
Why does in-flight mission abort often ends in ballistic high-g reentry?
6
What are the challenges in recovering Falcon 9's second stage this way?
2
How to retrieve MSL EDL trajectory using Javascript and webgeocalc API?
6
Why did Mars Pathfinder have such a high atmospheric entry velocity?