This September 2017 video NASA | Exploration Mission-1 – Pushing Farther Into Deep Space is over a year old. I found some aspects interesting and wonder if more details about this trajectory are now available.

The outbound coast to the Moon will take approximately 4 days. As Orion approaches the Moon, the service module will be used to perform a critical lunar gravity assist maneuver, allowing the ship to enter a distant retrograde orbit about the Moon.

The Moon will get larger and larger in the window, and at closest approach Orion will be just 62 miles from the surface of the Moon. [graphic: 4 days, 7 h 18m]

As the spacecraft flies around the far side of the Moon we will lose all communication back on Earth, and for a period of time Orion will be on its own. Mission Control will await acquisition of signal, and as we lock on, a new generation will see their first Earth rise. The spacecraft is now in the distant retrograde orbit, where its systems will be tested in the deep space environment for over a week. Along the way our ship will travel farther from

From what I can gather and deduce, the distant retrograde orbit does not begin when the video says it does (just after the first 100 km perilune at Earthrise) but in fact probably enters this orbit during a propulsive maneuver at apolune some time later.

So I think that there is a first orbit-raising burn at apolune to enter the distant retrograde orbit which is probably very roughly circular and doesn't have any very close approaches, and a second orbit-lowering burn days later which happens to be on the opposite side that results in one last ~100 kn perilune before continuing on a trajectory towards the Earth.

So the "nine-dash line line" (count 'em!) really represent days of orbiting around the Moon. 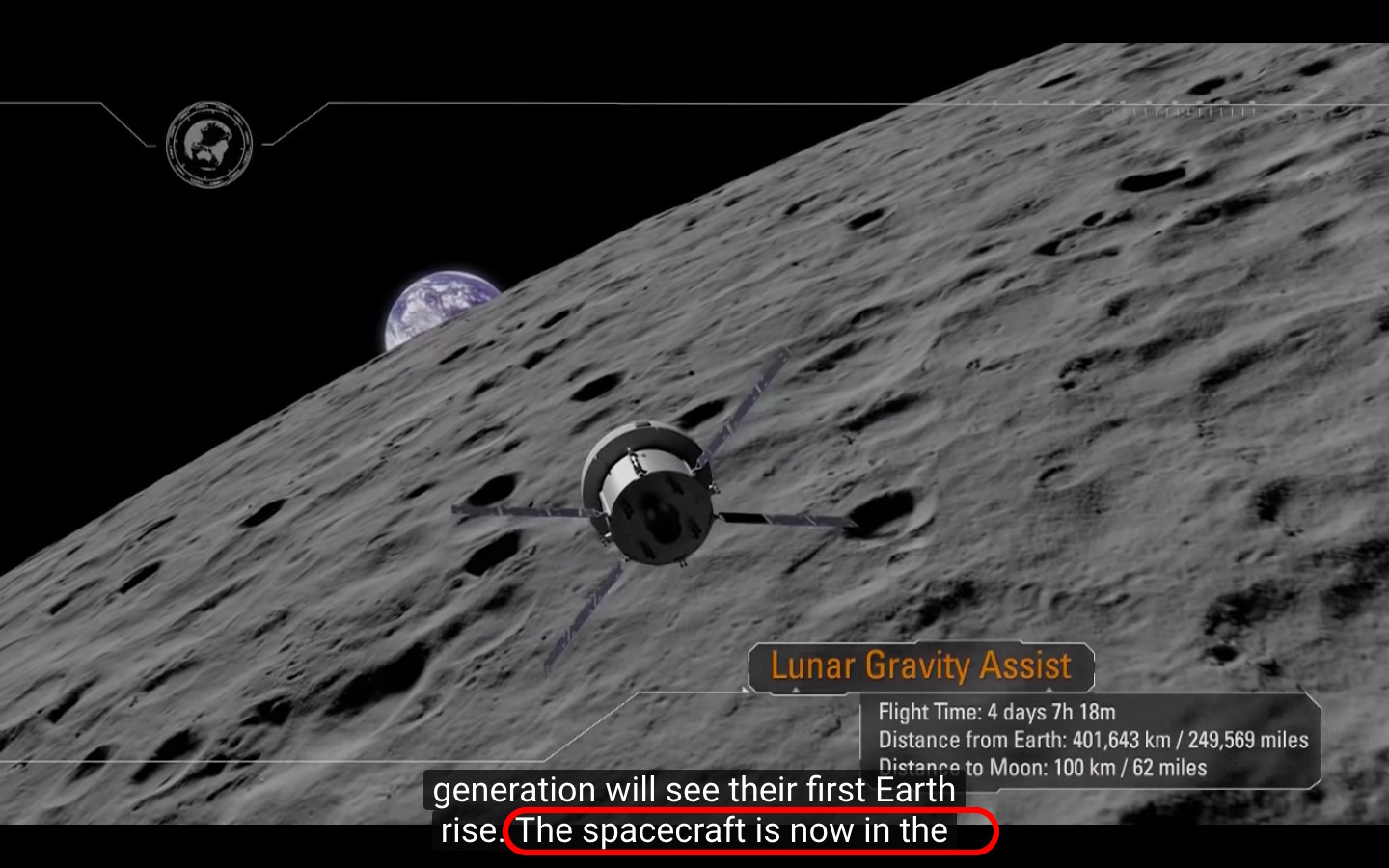 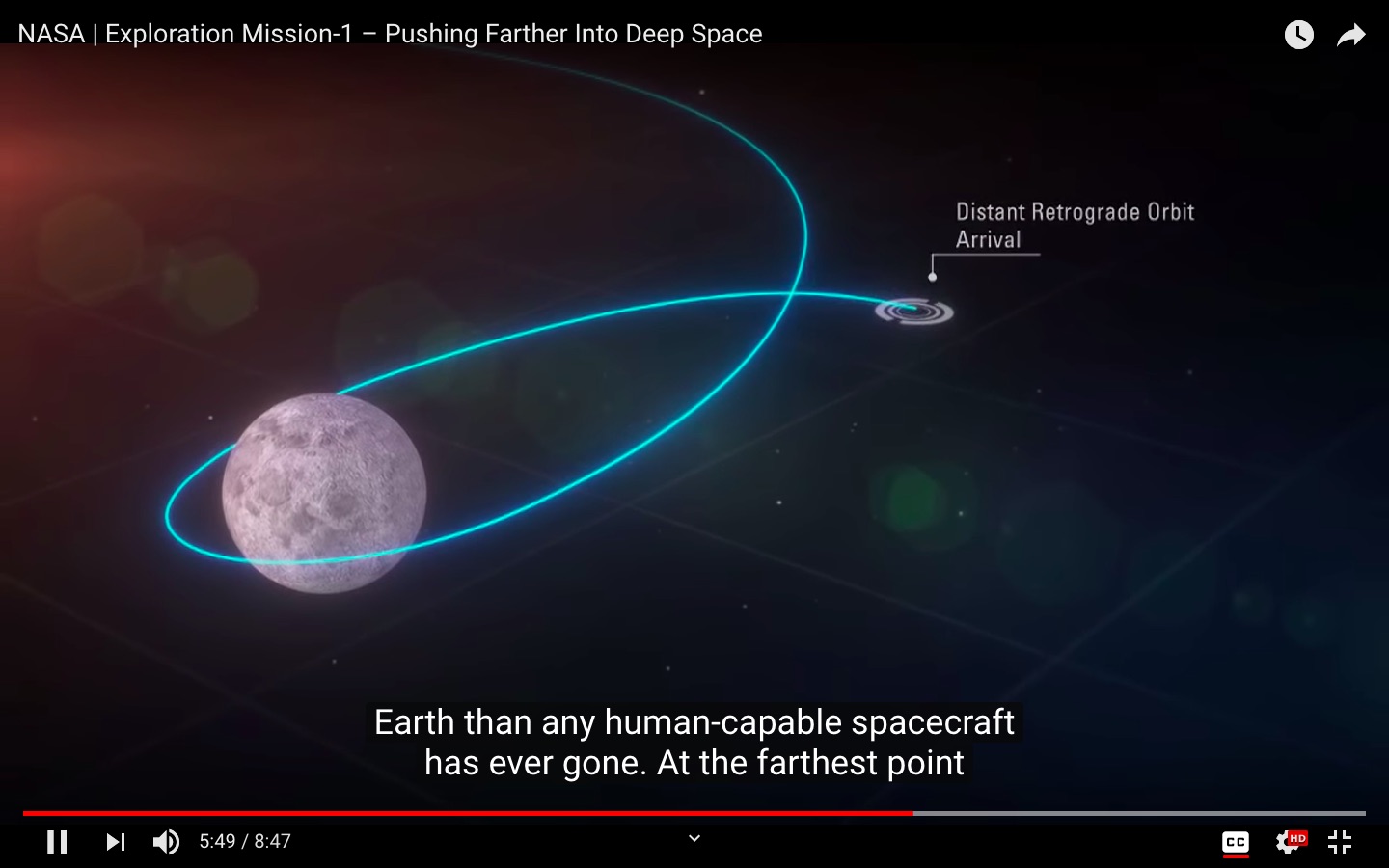 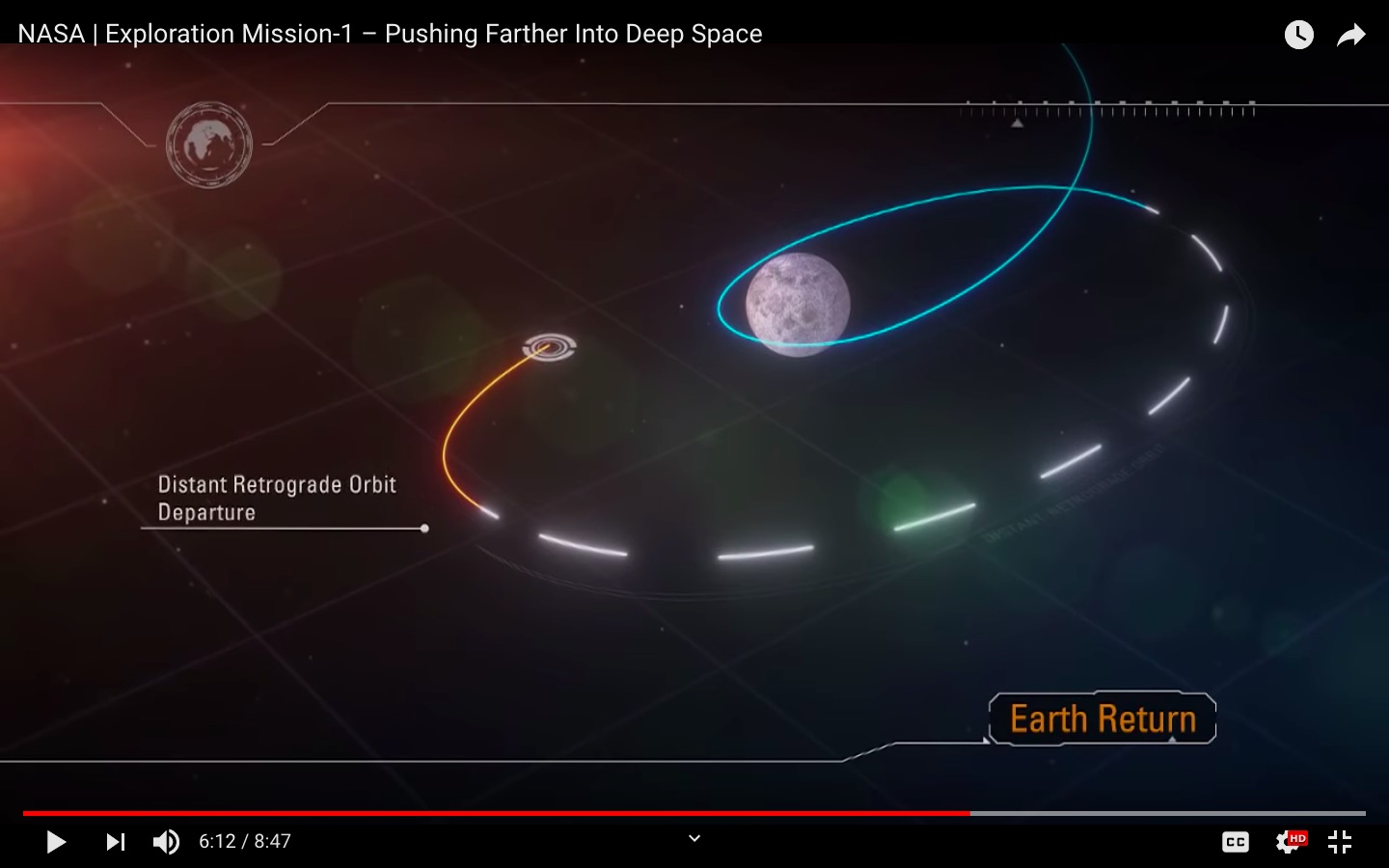 The blue part does not look like an orbit to me, and maybe it could be produced simply by the flyby.

According to the description, the dashed part is an orbit and by the shape also it could be (roughly circular as you said). Again the craft could end up there as a result of the flyby (without additional propulsion events during the blue part).

I have tried to look for sources and I landed on Nasa Orion Overview page which in turn has a link to Exploration Mission-1.

Indeed, in the description is says:

The outbound trip to the Moon will take several days, during which time engineers will evaluate the spacecraft’s systems and, as needed, correct its trajectory. Orion will fly about 62 miles (100 km) above the surface of the Moon, and then use the Moon’s gravitational force to propel Orion into a new deep retrograde, or opposite, orbit about 40,000 miles (70,000 km) from the Moon. he spacecraft will stay in that orbit for approximately six days to collect data and allow mission controllers to assess the performance of the spacecraft. During this period, Orion will travel in a direction around the Moon retrograde from the direction the Moon travels around Earth.

Emphasis is mine. I would say that after some trajectory correction, if needed (first bold part), the craft will be on the blue path and arrive to the dashed orbit using only Moon gravitational pull (second bold part). To leave that orbit and go back to Earth, it will do just another "precisely timed" burn (third bold part) which will put it again into a flyby and then towards Earth.

Not the answer you're looking for? Browse other questions tagged nasa orion-spacecraft lunar-orbit retrograde-orbit exploration-mission-1 or ask your own question.

6
Could Orion be used for human exploration of Phobos and Deimos?
12
What limits how long spacecrafts like Orion, Dragon, Starliner can support their crews' lives?
4
How does Exploration Mission 1 orbit differ from Apollo-era free-return? How far from Earth (and Moon) does it go?
22
Going from LEO to lunar using only low-thrust ion propulsion - can it be done?
3
Will NASA put astronauts into a polar lunar orbit? If so, how?
8
What's the record for the fastest trip to the Moon?
2
Delta-v penalty for stopping in a distant Earth orbit versus using atmospheric reentry for braking and returning to Earth from Mars?