What are NASA's dozen payloads for the Moon that will be ready for launch by the end this year? (2019)

Ars Technicha's NASA emphasizing “speed” in its return to the Moon says:

The leader of NASA's scientific programs, Thomas Zurbuchen, said this program was designed with speed in mind, and it would tolerate some failures as it takes "shots on goal" in attempting to land on the Moon. "For us, if we have any wish, we'd like to fly this calendar year," he said. "We do not expect every launch and landing to be successful."

NASA has begun to develop a dozen payloads, some entailing scientific experiments, others to better characterize the lunar environment, for these commercial flights. Zurbuchen said those payloads will be ready for missions before the end of 2019 but that the providers will set the schedules for when they are ready.

Question: What are the dozen payloads? Is there a list with a short description of each? Does this collection have a nick-name? e.g. "Dirty Dozen" or better yet The Good, The Bad and The Ugly?

From Phys.org's NASA heading back to Moon soon, and this time to stay:

Before this manned program, NASA is also pushing to send scientific instruments and other technological tools to the Moon in 2020 or even before the end of this year.

The agency is also calling for quick-turnaround bids to manufacture and launch such instruments, offering financial incentives to make it happen fast.

The thirteen payloads are all CubeSats. The technology on them is mostly focused on proving high performance EP for CubeSats and Lunar water mapping. 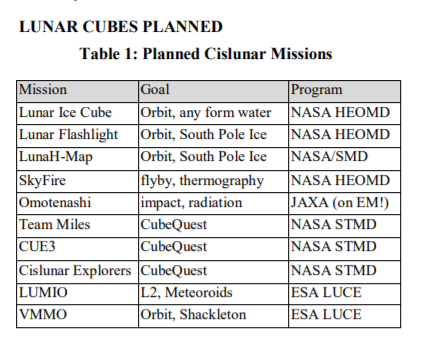 More information can be found here

Here's a partial list as of Feb. 3, 2016 thought things may have changed in the last three years:

The secondary payloads were selected through a series of announcements of flight opportunities, a NASA challenge and negotiations with NASA’s international partners.

Three additional payloads will be determined through NASA’s Cube Quest Challenge – sponsored by NASA’s Space Technology Mission Directorate and designed to foster innovations in small spacecraft propulsion and communications techniques. CubeSat builders will vie for a launch opportunity on SLS’ first flight through a competition that has four rounds, referred to as ground tournaments, leading to the selection in 2017 of the payloads to fly on the mission.

NASA has also reserved three slots for payloads from international partners. Discussions to fly those three payloads are ongoing, and they will be announced at a later time.

6
What is the Trump-era path to deep space?
3
When will NASA PubSpace really make publicly available most of NASA funded research papers?
8
Has NASA "gone south"? Why are astronauts needed to explore the Moon's south pole?
0
What is the connection (if any) between the new Artemis mission and the two Artemis spacecraft (Themis-B, -C)?
0
How often has NASA brought in people from outside to be responsible for making important decisions?
2
What is the name of the new NEO searching telescope "heavily based on" NEOCam? (now NEO Surveyor)
1
How did NASA fund searches for extraterrestrial life before 1993? How were the searches done?
11
What is the "mistake" that caused Doug Loverro to resign as NASA's Human SpaceflightChief so shortly before DM-2?