Opportunity's last tau was 10.8; what does that mean and how is tau defined and measured?

@ahiijny added a direct link to the Sol 5110-5114 MER B Downlink Report. These are the final days that signals were received from Opportunity.

The message "Tau Value is NOT a Typographical Error" calls attention to its value here of 10.8. See section(s) in bold below.

Question: Opportunity's last tau was 10.8; what does that mean, and how is tau defined mathematically and experimentally determined?

* Tau Value is NOT a Typographical Error *

Opportunity is currently in the midst of a severe dust storm though all subsystems are still operating as expected in RAM mode as of the Sol 5111 UHF pass. Solar array energy is approximately 22 W-hrs, with a measured tau of 10.8. This Tau measurement is the highest ever recorded from a ground station on the planet Mars. Dust factor was previously estimated at 3.27 as of Sol 5108.

With analysis from the data from the Sol 5111 downlink, we expected the rover to enter a low power fault mode very soon after that point in time. Since then, there have been no beeps nor fault windows detected during DSN coverage periods. This behavior is fully in line with array energy expectations, as Opportunity will use deep sleep during such times. We are now waiting for the skies above Opportunity to clear enough for the solar energy to support the fault communications windows (which will send signals to Earth). The team has suspended nominal sequence operations, and we are listening every day for Opportunity to talk to us via one of the fault windows. Thermal predictions carry a positive medium to long term message, whether it takes several sols or several weeks for the storm to weaken and let the sun through. We expect no thermal damage to the batteries or computer systems, and every sol is one closer to summer warmth. Obviously, the team is concerned. But, all of the data and our knowledge indicate that Opportunity is likely to be doing more geological experiments during the upcoming Martian summer, helping unwrap the mysteries of Endeavour crater. Until then, our current mission phase is one of patience and readiness.

Opportunity did not drive during this period. 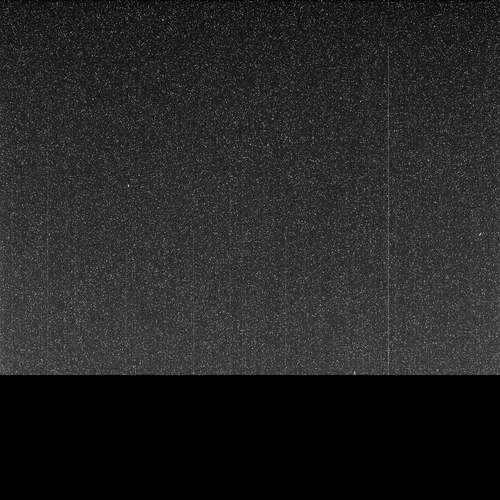 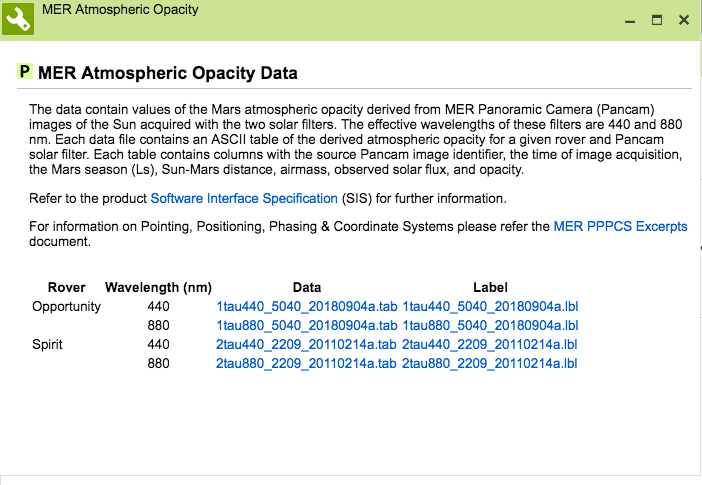 Vacuum would have a $\tau$ of zero. An opacity of $\tau$ means that the atmosphere is reducing the direct intensity of light from the Sun, if it were directly overhead, by a factor of $e^{-\tau}$.

It was measured by the rovers every sol by pointing the PanCam at the Sun, or where the Sun is supposed to be, measuring the intensity, correcting for the slant angle to the Sun, dividing by the intensity of the sunlight at Mars' current distance from the Sun, and taking the negative natural log of that. The reality is more complicated, but that's the general idea.

(I hate that I have to use the word "was" in that sentence.)

Emily Lakdawalla made a nice animation and table of what the Sun looks like as $\tau$ went up at one point for Spirit:

The energy on the solar panels is not reduced by that factor, since $\tau$ does not measure all the diffuse, scattered sunlight still making it to the panels.

For context, here is a plot of the $\tau$ measured by Opportunity over its entire mission from Mark Lemmon's web site: 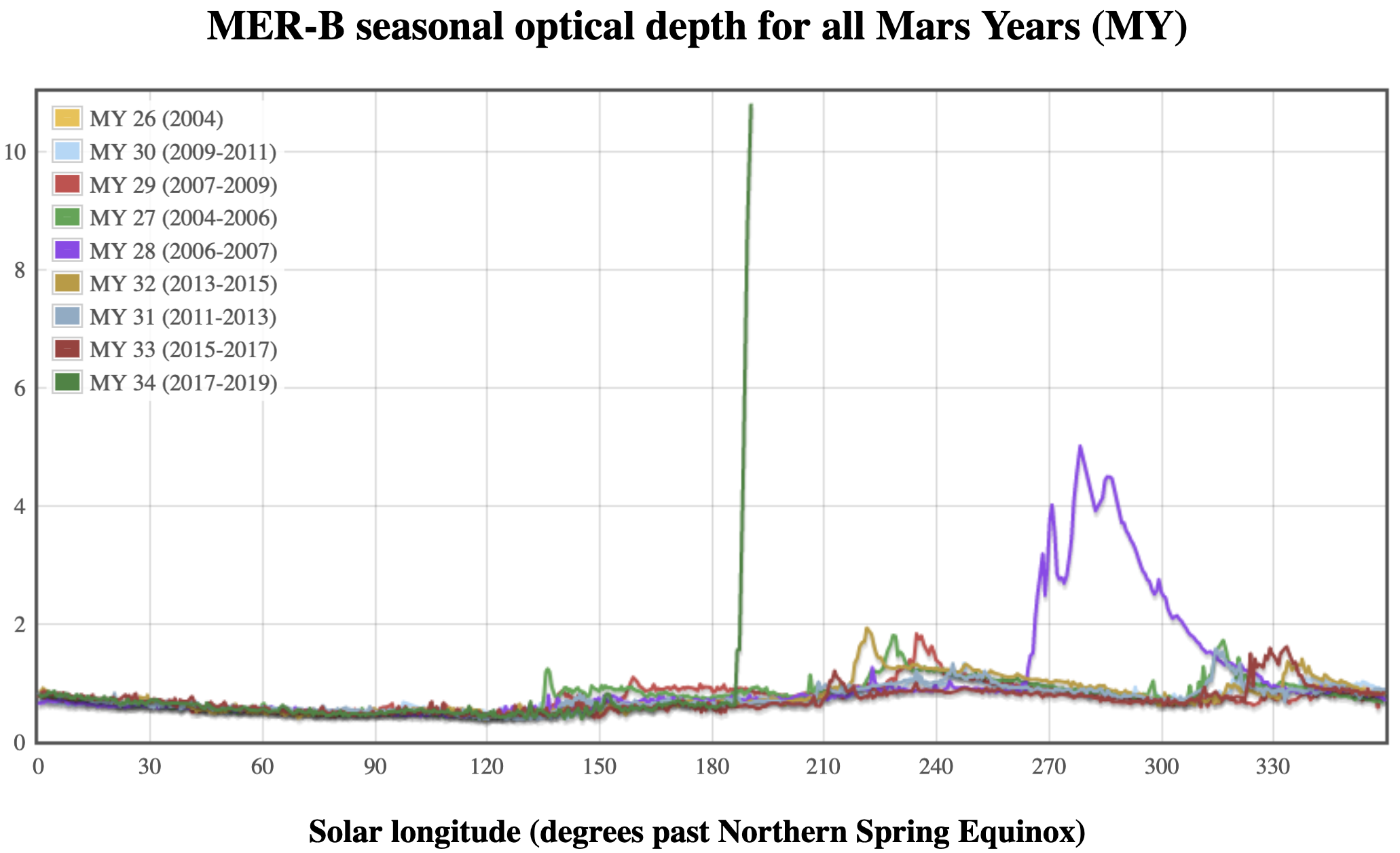 You can see what we thought was a really bad storm in 2007 in purple, getting up to $\tau\approx 5$, and the one insane peak of $10.8$ right before Opportunity permanently went off the air.

Not the answer you're looking for? Browse other questions tagged rovers terminology data-transmission opportunity mars-exploration-rover or ask your own question.

22
Is wind-power a viable backup power source for Mars One?
17
Why exactly does Curiosity's RTG make more electricity on cold days?
16
Are launch windows to Mars avoided if they result in landings during dust storm season?
9
What was the last message Opportunity sent?
4
How long would astronauts' footprints on Mars persist?
2
Do Mars rovers have irises? How do they safely look at the Sun?
4
Thermal batteries rather than battery-powered heaters for small craft on Mars; how much mass would it add, how much would it replace?

7
What does “supersonic large amplitude ID maneuver PTI” mean, and what does a tumble motor do?
16
What does "in the bucket" mean?
20
Curiosity is still dirty! How will the ExoMARS Rover keep its solar panels dust-free and collecting sufficient power?
13
What was the solution to the half-amp the heater on Opportunity was drawing?
42
What was NASA's "Hack" to improve Opportunity's memory in 2015? Did it help?
27
What was the last message to Opportunity today (13 Feb '19)?
9
What was the last message Opportunity sent?
9
What was the driving record of each rover on Mars in one sol, and when?
13
Do Mars rovers protect optical windows during dust storms? Do they "avert their eyes" or do they just "grin and bear it"?
3
Does curiosity's RTG generate neutrons as this NASA CheMin X-ray detection system webpage suggests? If so, how?