How many people spoke to Apollo 8 from outside the US?

It shows a clipping from The Canberra Times front page, "With thanks to Mike Dinn. Scan: Colin Mackellar."

Mr. M. J. Dinn, a 35-year-old Englishman, became yesterday afternoon the first man working at an Australian space station to speak to the crew of Apollo-8.

On an instruction from Flight Command, Houston, Mr. Dinn, who is the assistant director at Honeysuckle Creek, told the astronauts that a “minor fault” had developed in a voice-controlled relay at the station.

This meant, Mr. Dinn said last night, that if the crew had wanted to talk to Houston the ground-station would not have been able to transmit an immediate reply. His job was to tell them of this situation.

The fault was eradicated by switching to another relay.

About 40 technicians at the Honeysuckle Creek-Tidbinbilla complex began tracking the flight about 10:30am yesterday.

They worked for 12 hours, with the Carnarvon, WA, station in support at various times. 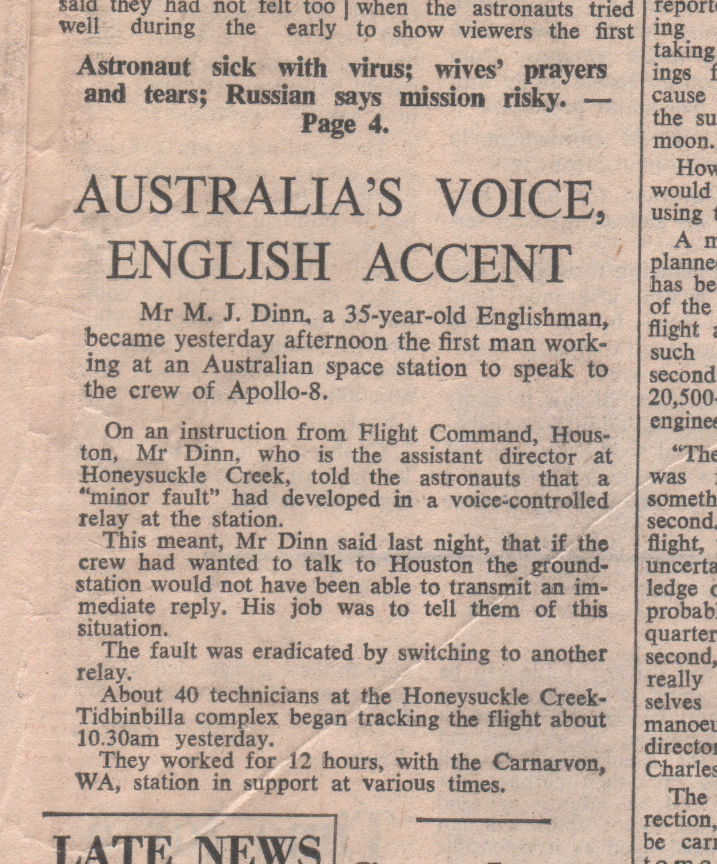 The Canberra Times’ front page also reported Mike Dinn’s brief conversation with the Apollo 8 astronauts when there was a comms problem between Houston and Honeysuckle.

Doubtless Bernard Scrivener, the station’s admin and public relations officer – or Don Witten, visiting PAO from Goddard – would have alerted the newspaper to this local story.

Only Houston and the downlink are heard on this recording made at Honeysuckle, Sadly, Mike’s uplink was not. 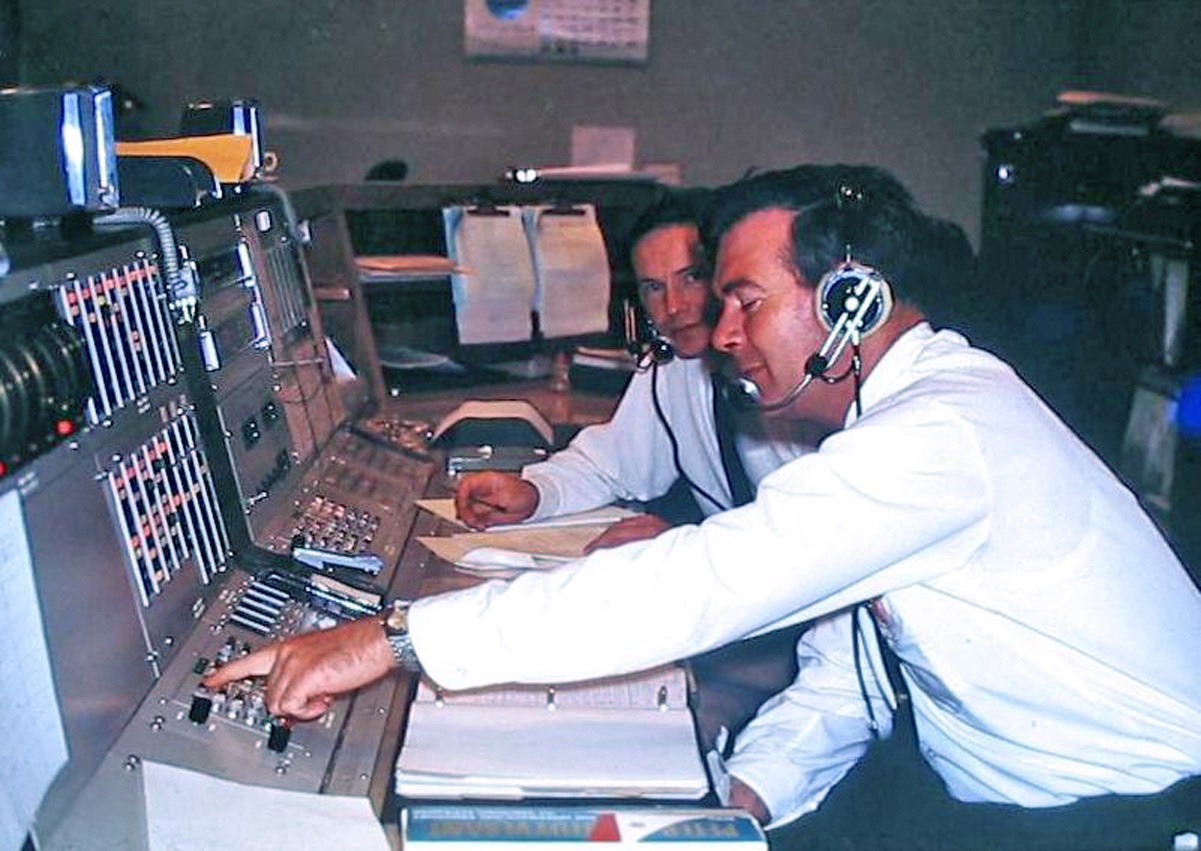 John Saxon (background) and Mike Dinn at the Ops Console, December 1968 (from the calendar), and almost certainly during Apollo 8. Photo: Ron Hicks.

There are at least not any others in the onboard and air-to-ground transcripts, as far as I can see

Honeysuckle communications have been preserved and digitized, available for download here, with chunks ordered by mission highlights.

The episode is recorded there, but only the downlink portion.

As far as I can tell, there's no other communication by people outside Houston CC. But I'm not very familiar with the routines of the Apollo communication procedures, so I can not completely exclude the possibility of some additional comm techs speaking from Honeysuckle and Madrid.

Not the answer you're looking for? Browse other questions tagged nasa apollo-program apollo-8 honeysuckle-creek australia or ask your own question.

7
Did Apollo's velocity slow down after TLI due to Earth's gravity?
5
Help understanding how these components of a Honeysuckle Creek dish antenna work
3
First radio contact between an Australian and a spacecraft? First voice communications?
3
How does this large, flat antenna made from overlapping circles at Australia's Carnarvon Space Tracking Center work?

10
How many burns did the Apollo 11 mission need?
54
How did NASA prevent third parties from spoofing Apollo communications?
8
"Luckily with no Lunar Module, Tidbinbilla was able to keep tracking with no interruption..." Why is no LM significant?
4
How many AGC keystrokes did an Apollo rendezvous take?
18
What gave NASA the confidence for a translunar injection in Apollo 8?
0
How often has NASA brought in people from outside to be responsible for making important decisions?
3
How does this large, flat antenna made from overlapping circles at Australia's Carnarvon Space Tracking Center work?
3
First radio contact between an Australian and a spacecraft? First voice communications?
25
How many people have witnessed Earthrise?
9
How many satellites were orbited from Australia in total?