"Luckily with no Lunar Module, Tidbinbilla was able to keep tracking with no interruption..." Why is no LM significant?

The page describes a problem with one of the dish antennas that needed to be repaired during the Apollo 8 mission.

One line however really confuses me.

Luckily with no Lunar Module, Tidbinbilla was able to keep tracking with no interruption to the signals and data while we pulled our antenna down.

Question: Why "with no Lunar Module" was it easier for Honeysuckle Creek to keep tracking with no interruption?

This did not last long. At Honeysuckle Creek we had been suffering a problem in the antenna feedcone that we called the ‘Search for the Spurs.’ Bill Kempees, the Chief Engineer, and Jim Kirkpatrick, the Facilities Engineer, and their teams were trying to track down random bursts of noise, or spurs, appearing on each side of the uplink when the transmitter was on. It was visible on a spectrum analyser we had sitting in the USB area. Although we could see it, there wasn’t a simple explanation for its source.

The theory was it was arcing in the flanges of the waveguide – but how do you find it and stop it? Nobody could be observing in the feedcone when the transmitter was on. Before the mission they had asked me to try and photograph any arcing inside the feedcone, so one night I slung a Polaroid camera over the window looking down straight into the guts of the feedcone. A moonless night was chosen and all the floodlights were turned off and the camera was set with the shutter open all through the night so if an arc occurred it should cause a spark, be recorded on the film, confirm it was arcing and identify where the fault was located. Unfortunately the film didn’t like the transmitter’s 20 kilowatt signal beamed straight at it, just showing a mysterious white circle, so the idea had to be abandoned.

As soon as Apollo 8 was on its way the spurs were back so there was a high level decision to pull the feedcone apart and smooth and coat all the flanges, as we didn’t want to compromise the mission, so this day, Sunday, Honeysuckle USB went “Red cannot support” for a couple of days. Technical specialist Dick Albert was flown out from Goddard to help with the exercise. 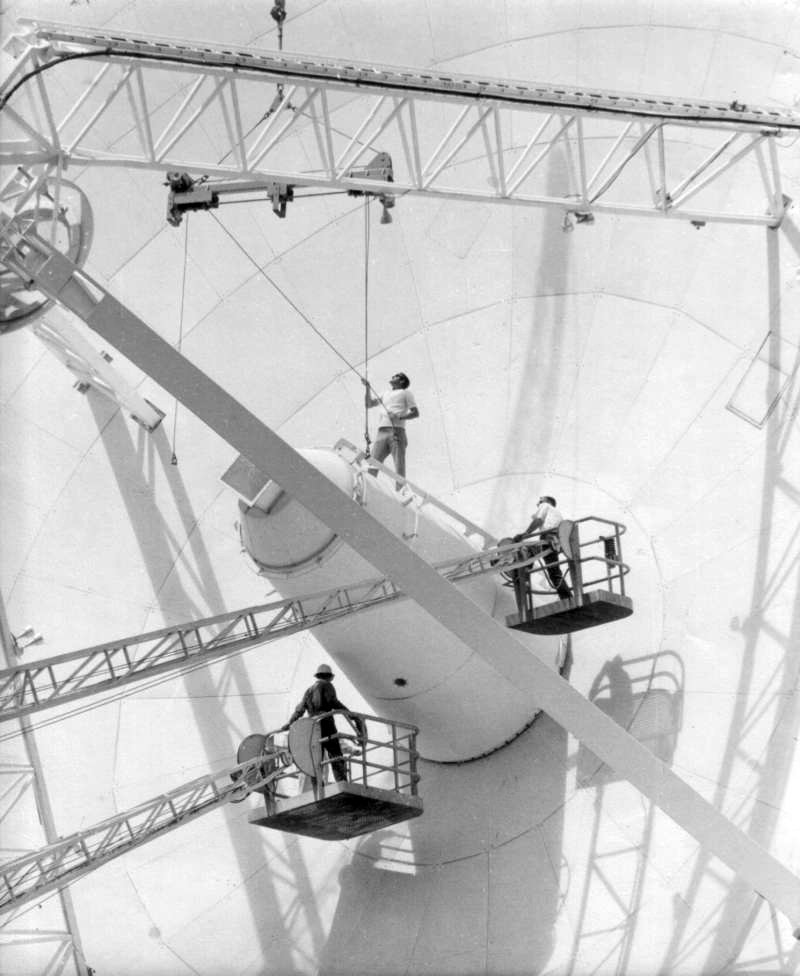 About to remove the feed cone on the antenna.

We had to remove the feed cone during the Apollo 8 mission. The crane and one of the cherry pickers was borrowed from Tidbinbilla. Luckily with no Lunar Module, Tidbinbilla was able to keep tracking with no interruption to the signals and data while we pulled our antenna down. 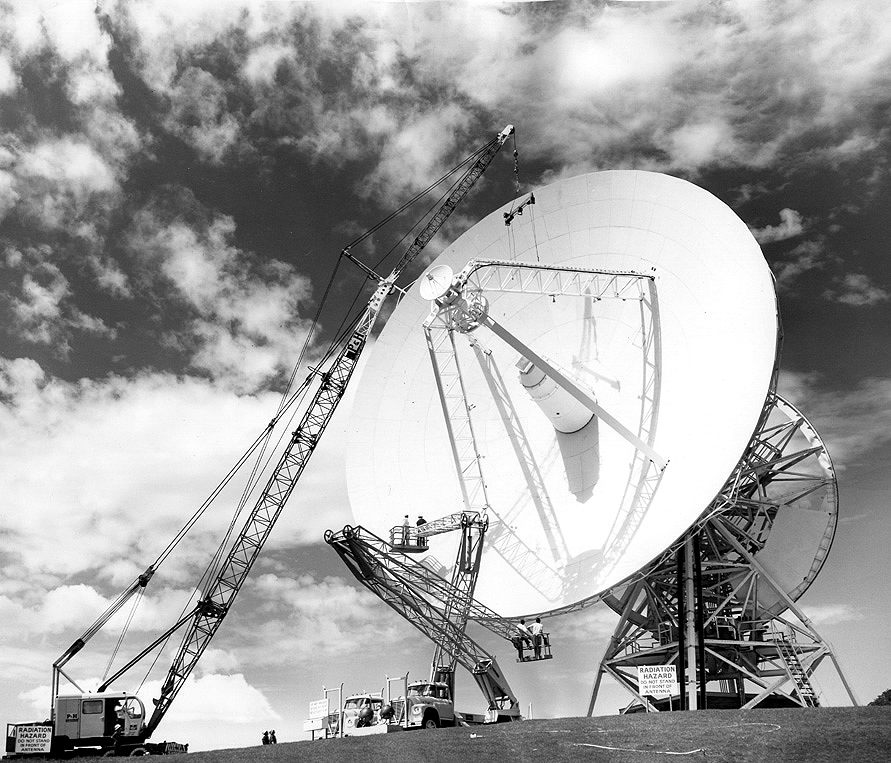 John Saxon writes, “One Cherry picker occupant was probably Jim Kirkpatrick and the other Ted Burt.”

Spacecraft tracking in Apollo was done by the Unified S-Band (USB) system. It was called "unified" because it combined voice, tracking, telemetry, and computer commands. There was a completely different communication system (VHF) which did voice and television, but not tracking, and is not related to this question.

Apollo 8 was an early manned flight, without a proper lunar module. (There was a completely non-functional test article LTA-B for ballast, which was left in the 3rd stage.) All later flights had a working lunar module, meaning mission control needed to talk to and track two different spacecraft.

NASA wanted to communicate with both spacecraft using only one ground station, but tests proved it wouldn't work:

However, the presence of two, well-separated spacecraft during lunar operations stimulated the rethinking of the tracking and communication problem. One thought was to add a dual S-band RF system to each of the three 26-m MSGN antennas, leaving the nearby DSN 26-m antennas still in a backup role. Calculations showed, though, that a 26-m antenna pattern centered on the landed Lunar Module would suffer a 9-to-12 db loss at the lunar horizon, making tracking and data acquisition of the orbiting Command Service Module difficult, perhaps impossible.

So they decided to track the two spacecraft with two dishes at a time. Since only one dish at each site had been built for the Manned Space Flight Network, they repurposed dishes from the Deep Space Network as needed:

It made sense to use both the MSFN and DSN antennas simultaneously during the all-important lunar operations.

Interpreting the article you cited (my additions in italics):

At Honeysuckle Creek [MSFN] we had been suffering a problem in the antenna feedcone that we called the ‘Search for the Spurs.’

The crane and one of the cherry pickers was borrowed from [the DSN station at] Tidbinbilla [to fix the MSFN dish].

Luckily with no Lunar Module [i.e. only one dish needed], Tidbinbilla [DSN, still operational] was able to keep tracking with no interruption to the signals and data while we [MSFN] pulled our antenna down.

7
Did Apollo's velocity slow down after TLI due to Earth's gravity?
3
Did Australian ground stations cover other Apollo missions' first steps?

11
Why did ISRO require additional tracking ships in the South Pacific for its MOM mission?
8
How many space-craft can a station on the DSN communicate with concurrently?
4
How does this strangely-shaped horn at Honeysuckle Creek Tracking Station work?
22
What exactly turned on the light indicating Apollo 8 was starting to fall towards the Moon?
4
How many people spoke to Apollo 8 from outside the US?
3
Did Australian ground stations cover other Apollo missions' first steps?
1
Which map is right? Where exactly were the two Australian dish antennas used in the Apollo missions?
3
First radio contact between an Australian and a spacecraft? First voice communications?
7
Why are modern satellite ground station and deep space communications dishes with secondary mirrors almost always Cassegrain?