Does the Dragonfly project (quadcopters on Titan) envision attached RTG's or would they be static and revisited for charging?

In this answer I link to the Phys.org article Researcher sets eyes on Saturn's largest moon which describes the Dragonfly project, a way to explore extended areas of Titan's surface difficult to probe from orbit optically (except in infrared) by using robotic quadcopters near the surface.

Electrical energy is produced continuously via RTG, stored in batteries where it can be used at higher power during flight.

With solar power unavailable because of both Titan's distance from the sun and its dense atmosphere, Dragonfly would be plutonium-powered, using a Multi-Mission Radioisotope Thermoelectric Generator. That is the same power source as the Mars Curiosity rover and the Cassini space probe. It could fly several kilometres on a single 'Titan overnight' charge and potentially cover hundreds of kilometres during a Titan day (equivalent to 16 Earth days).

With a surface gravity only 14% that of Earth's and an estimated density of 4 to 5x greater than that of Earth's (nitrogen 1.5 bar 90 K) it's probably the most quadcopter friendly solar system body for surface exploration, at least in terms of energy.

Is the RTG part of the copter, or on a static base station that the copter has to return to to recharge?

According to Wikipedia's Multi-mission radioisotope thermoelectric generator; Design and specifications the mass is 45 kg and beginning of life electrical power is about 2,800 125 Watts. I am not sure if they plan on using a full-size "COTS MMRTG" or something scaled down, but considering Titan's unique atmospheric conditions it certainly seems at least plausible to keep it on the flier, and the thermal output would certainly come in handy.

The RTG will be part of the helicopter. The helicopter will weigh 420 kg (early estimate). 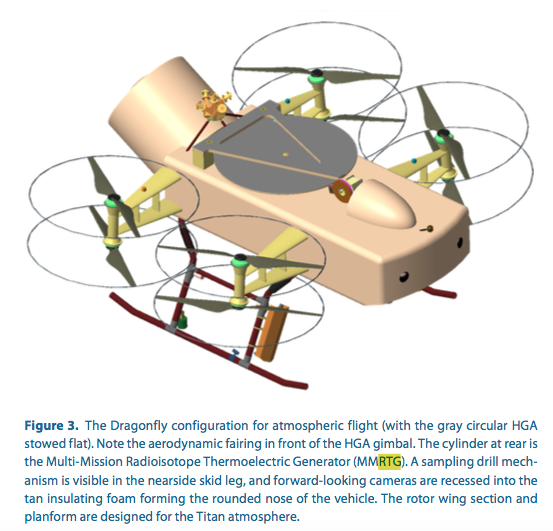 Dragonfly will be a helicopter-only mission, there's no ground station. This is the landing configuration, you can see the helicopter is the only object inside the aeroshell, i.e. the only object that will land. 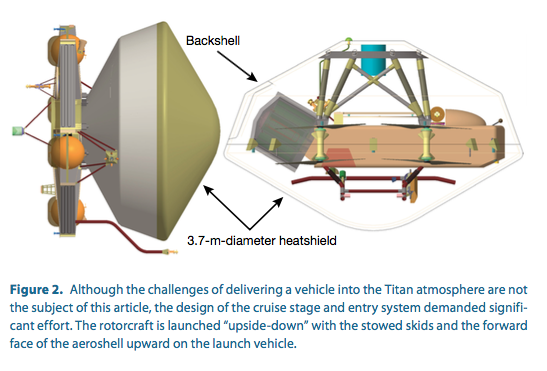 Not the answer you're looking for? Browse other questions tagged lander titan rtg helicopter dragonfly or ask your own question.

43
Why aren't we sending quadcopters to mars?
14
Why are planetary probe RTGs tilted at a jaunty angle?
9
What is the pop-up circular disk with spiral pattern in this NASA animation of the Dragonfly helicopter for Titan? Antenna? Kind, band, target?
3
Closed oxygen cycle methane-burning internal combustion engine for Titan rover/helicopter? Works like a battery together with RTG that won't freeze?

54
Why wasn't an RTG used on the Juno spacecraft?
27
Why are RTGs different colors?
5
Why Never-EVER Land?
6
What would a "water" landing on Titan be like? How viscous is the liquid?
9
Can Dragonfly make it to one of Titan's Lakes?
3
Does curiosity's RTG generate neutrons as this NASA CheMin X-ray detection system webpage suggests? If so, how?
9
What is the pop-up circular disk with spiral pattern in this NASA animation of the Dragonfly helicopter for Titan? Antenna? Kind, band, target?
9
How do they know that the Dragonfly helicopter won't get quickly coated in tholin muck? Any desliming technology for camera lenses or propellors?
1
How many watts of electricity are available for systems during a Mars transit?