Will the duration of traveling to Ceres using the same tech developed for going to Mars be proportional to the distance to go to Mars or not?

Planning travel within the solar system doesn't work quite like you assume. A spacecraft typically uses its rockets for a few minutes at the start and end of the journey and coasts the rest of the way, but while it is coasting the gravity of the planets it leaving or approaching, and much more importantly the Sun act to change its direction and velocity.

To go from Earth to Ceres, you need to initially travel faster than you do to get to Mars, otherwise you will not be going fast enough to get that far away from the Sun before the Sun's gravity slows you down and starts pulling you in.

There are lots of possible times to depart and arrive, each of which needs a different amount of rocket propulsion. These are conveniently gathered in something called a "pork chop plot". You can calculate them online 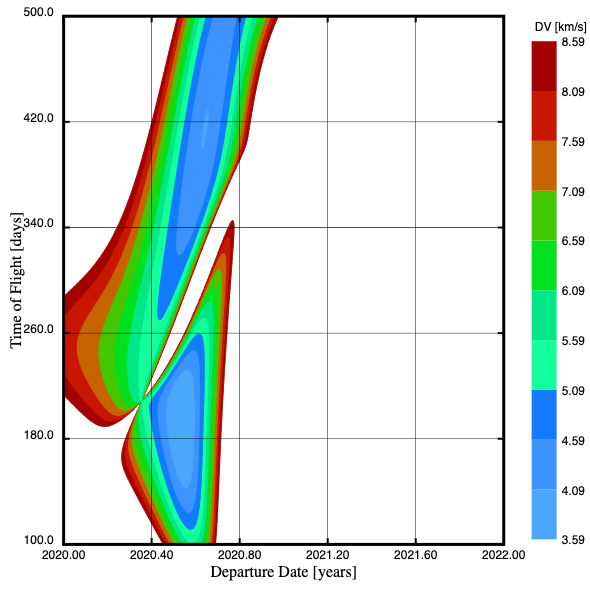 This shows departure dates on the x axis, flight times on the y axis and the fuel needed (for the departure from Earth at least, but you can aerobrake on arrival) by the colour.

For Ceres you get: 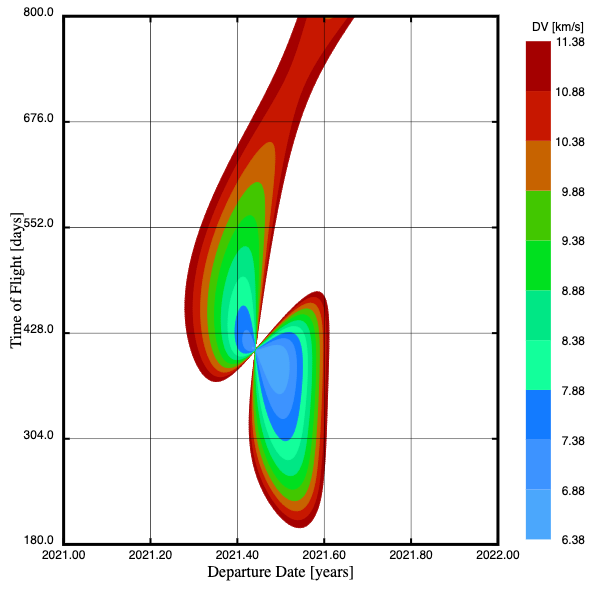 So the most fuel efficient journeys need almost twice as much delta-V (more because you can't aerobrake) and take about twice as long.

To get somewhere for the minimum fuel generally takes one half the orbital period of the slower of the launch and target orbits--and when you get into the realm where this breaks down you're also in the realm where you're going not going to be using a simple minimum-fuel trajectory anyway. (Not to say that you just pile on the engines, the normal approach is to use planetary flybys to gain or shed velocity. Nothing has been launched to a target beyond Jupiter without using Jupiter for a boost.)

Not the answer you're looking for? Browse other questions tagged spacex mars ceres or ask your own question.

3
Gradulated Accelerated Transfer
37
Why can't we use the same radiation shielding in Mars that we used when going to the moon?
10
Is BFR refilling in space purely milli-g "gravity" feed rather than using pumps and/or pressure?
7
How can I verify my reconstructed gravity field of Ceres from spherical harmonics?
7
Terraform via moving Ceres To Mars orbit, using ion drive
13
How unreachable are Jupiter's moons from Mars with the technology developed for going to Mars?
1
Would it be possible to reach Mars using the same fuel-saving method SpaceIL's Beresheet is using?
5
How do the small radio receivers on space probes catch enough of a signal to communicate with us?
26
Are there any greater risks of traveling significantly faster to another planet?