Can small asteroids in the asteroid belt be detected on the fly and how much of a threat do they represent for a human manned space mission there?

Supposedly there are between 1.1 to 1.9 millions asteroids larger than 1 km in the asteroid belt. I assume there are many more , a lot of smaller ones, which cant be detected from here.

According to Wikipedia Asteroid Belt

The first spacecraft to traverse the asteroid belt was Pioneer 10, which entered the region on 16 July 1972. At the time there was some concern that the debris in the belt would pose a hazard to the spacecraft, but it has since been safely traversed by 12 spacecraft without incident

If SpaceX succesfully lands a human mission on Mars in 2024, and if they actually start building a self sustained permanent base there by 2029, space exploration could speed up really fast and the closer (on the cold side of the solar system) solar system objects are in the asteroid belt, with a dwarf planet and some large asteroids which were confused with planets in the past due to their large sizes. And some of them get closer to Mars in distance than the distance of Earth-Mars. So one of the biggest problems could be traveling among all those asteroids and debris without getting your spaceship destroyed. That's what I would like to know,

Can small asteroids in the asteroid belt be detected on the fly by a spaceship and how much of a threat do they represent for a human manned space mission there, is there any technology developed for this?

You could set up several optical (visible or thermal IR) survey telescopes around Mars, and try to vigilantly scan the most celestial sphere (except for directions near the Sun) for unexpected, very dim objects moving unpredictably, but that's quite a challenge, and there's still the big blind spot anywhere in the general direction of the Sun.

A better way is to start looking now! For potential NMO's (near-Mars-objects) you would start looking now, or at least several years before you started to need the information. And you would look using a space telescope with an orbit closer to the Sun than Mars for two reasons:

Number 2. is important because it means you can shield your telescope from the Sun's heating effects as well as from the light. You want to keep an asteroid-hunter's telescope's cryogenic optics and sensors very cold.

It turns out that it's easier to search for these trouble-makers in the thermal infrared than it is in visible light. They are fairly black (albedo's often from 0.05 to 0.1) and reflect direct sunlight poorly. But that means that they absorb most of the Sun's light and effectively radiate it in thermal infrared. But the only way to have a telescope sensitive to thermal IR is to have the entire telescope (mirrors and optics and sensors) very cold so that the thermal radiation of the distant asteroid isn't swamped by thermal IR from the telescope itself.

Most stars (but not all objects) are much dimmer in thermal IR than they are in the visible, so that could potentially help when sorting out asteroids versus stars in preprocessing, compared to visual surveys. 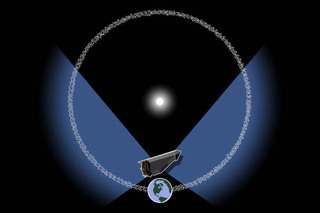 Source: NEOCam: Finding Asteroids Before They Find Us (Orbit)

For more about WISE, NeoWISE, NEOCam (now NEO Surveyor), and B612, see:

You might consider searching using Radar (similarly to the way space debris is monitored) but you'd dismiss it quickly. The Sun paints objects between here and Mars with 0.5 to 1.3 kilowatts per square meter, and at a million kilometers you won't be able to match that with radar or even Lidar, at least not for the foreseeable future.

Another way this is often expressed is that the strength of signals using optical detection varies as $1/r^2$ whereas for radar (where you have a round-trip) it varies as $1/r^4$.

Not the answer you're looking for? Browse other questions tagged asteroid debris asteroid-belt or ask your own question.

7
What is synthetic tracking, and why would a 35 cm Earth imager be 10-30x better than Pan-STARRS or LSST for interstellar asteroid discovery?
4
What does this paper say is wrong (quantitatively and procedurally) with WISE & NeoWISE asteroid data?
1
Why has the Earth-Sun libration point L1 been chosen over L2 for NEOCam (now NEO Surveyor) to detect new NEOs?
2
Calculate NEO object position with nasa Near Earth Object data
1
How will the "fleet of small asteroid hunters" proposed by the B612 Foundation & York Space Systems work?

8
How does one spacecraft best visit multiple asteroids?
16
Would the one million people on Mars be killed by an impact equivalent to an Extinction Level Event on Earth