Cheapest rocket to go to space?

Have you ever heard of the old movie Salvage? The TV movie, “Salvage,” aired on January 20, 1979. The film begins with Harry successfully bidding for a vintage bi-plane and then reselling it in pieces for more than twice that he paid for it. He’s using every penny he has to purchase up surplus military components, specifically, aerospace surplus, such as 3 XLR81-BA-7 (Agena) engines.

In short, he basically built a small rocket, went to the moon, and salvaged "it" without any professional help, using extremely powerful fuel.

I'm wondering if this could possibly be put into action, but not with strong fuel, just cheap stuff. I was thinking, maybe they should use liquid methane or liquid hydrogen, and even caught myself thinking of a liquid hydrogen, oxygen, and alcohol + carbon powder hybrid. 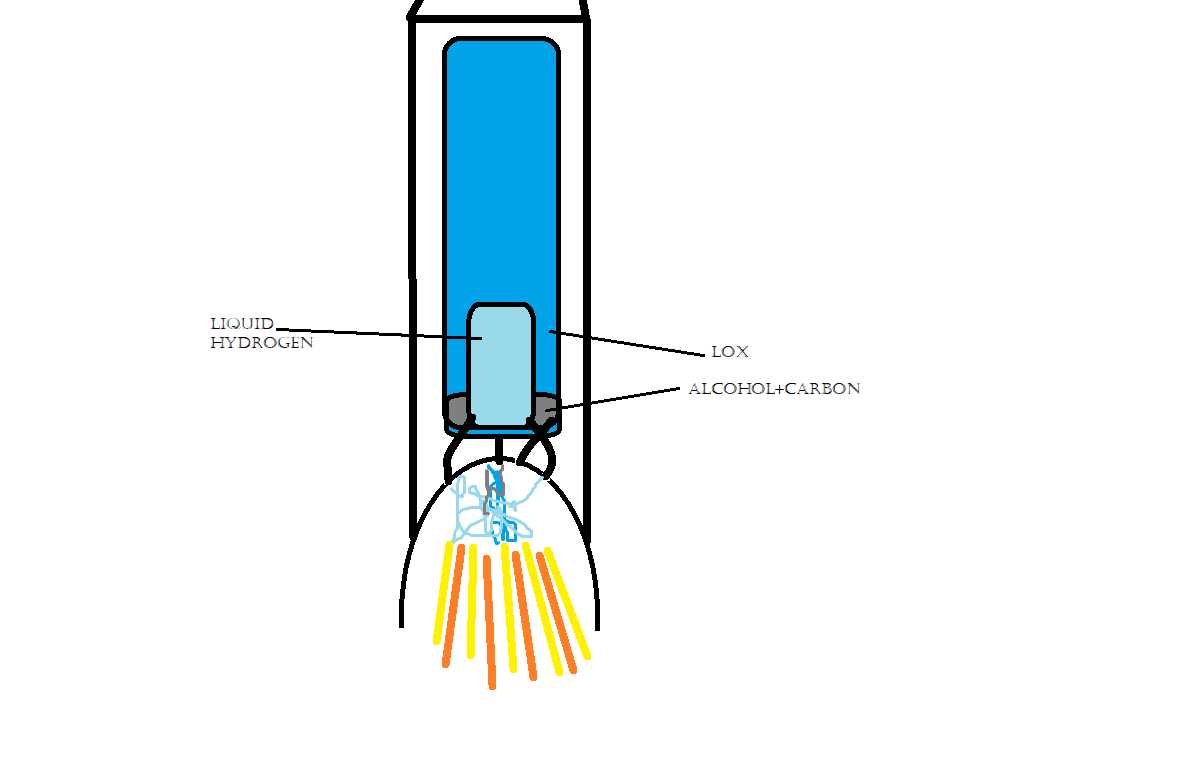 So, is a LH, LOX, and alcohol hybrid engine the cheapest means of space travel?

They say space is hard. If you simply plop a big tube full of fuel and oxidizer on top of a surplus engine and light it, you will not go to space today.

To get a feel of the smallest shoestring you can have and still get to space, look at Rocket Lab in New Zealand. They've spent the last 10 years or so developing the ability to reliably go to space. Their Electron rocket is one of the smallest orbital rockets ever designed. It can send about 150 kg into orbit for the low, low price of $6 million.

At \$40,000/kg that's quite expensive; SpaceX can lift much more at prices below \$10,000/kg. What Electron offers is fast turn around time, a unique launch location (New Zealand), and a low total launch cost. And, I'm surprised to discover, it can reach the Moon! It's set to launch the 300 kg Moon Express in 2019.

Scott Manley has a nice video on the Electron. If you want to get a good feel for how hard it is to get into space, I highly recommend watching his other videos on rocket science.

But while 300 kg is enough to launch a few people, it isn't enough for all their stuff: food, water, oxygen, life support, suits, lander, ship to get home. And you can't simply scale up. Here's why.

A successful rocket requires solving a number of very, very hard problems in extreme conditions. Guidance systems, fuel pumps, nozzle designs, leaking fuel, cryogenics (liquid oxygen and hydrogen must be kept frozen), heat shields (you want to come back), staging, and so on.

Then getting into orbit requires not just going up 100 km, that's the easy part. It also requires going sideways at 8 km/s or about 29,000 km/h. This requires a delta-v of about 10km/s. Getting into lunar orbit requires an additional 6 km/s. And landing another 1.5 km/s. 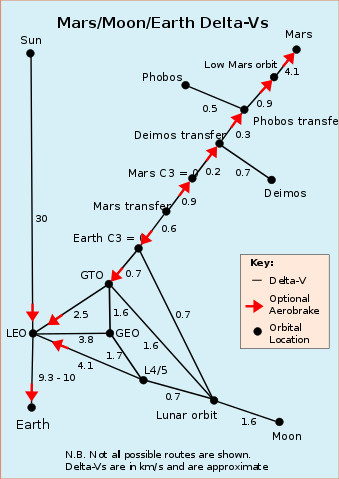 Delta-v is, very roughly, a measure of how powerful your engine is and how long it can burn proportional to the mass of the vehicle. As mass goes up, delta-v drops. As mass goes down, delta-v increases. Due to the tyranny of the rocket equation, this is not a linear relationship. For every kg of mass you add, you have to add more fuel, which means more mass, which means more fuel. To get to low Earth orbit requires about 85% of the craft to be fuel. Staging is more efficient, but adds complications. Getting to the Moon requires an even worse fuel-fraction.

This is why getting three people, and 5,000 kg of their stuff, to the Moon was such a colossal undertaking. It wasn't just that we had to learn how to do it, it was because the scale was so enormous and expensive. It's why we haven't gone back. And it's why you can't make a rocket out of surplus parts and fly to the Moon.

Salvage 1 was a TV series launched by a pilot TV movie (Salvage) in 1979. I watched the show during its original broadcast, enjoying the escapist fun, but quite cognizant that it was pure fantasy.

Premise of the show

Harry Broderick (Andy Griffith) is a man running a salvage business who has a talent for economically exploiting what others might see as junk. He sees an opportunity in recovering hardware NASA left on the Moon during the Apollo program, and recruits a fuel expert and a former astronaut to help him build a rocket ship to retrieve it.

The fuel expert has a "magic" formula for something many times more powerful than has been used in any rocket. IIRC, in-show it was dismissed by NASA as too unstable.

The former astronaut has a pet theory for a sort of shortcut route to the Moon which NASA dismissed as "crank" science.

The combination of the magic fuel and shortcut route make feasible a rocket built on a shoestring budget that can execute a salvage of things NASA left behind on the Moon.

The Salvage 1 rocket fuel is pure Hollywood fiction. The John D. Clark book "Ignition!" presents an account of humanity's quest for the "best" possible rocket fuel ("best" depends on the qualities chosen to be of highest priority). The book lays out the numerous avenues of research and development and the corresponding outcomes. Based on the wisdom revealed in this book, no such fuel as depicted in the show could exist. There are limits to the amount/density of energy which can be stored chemically. The fuels which approach those theoretical limits are extremely difficult to handle - highly toxic (reactants and reaction products) and corrosive and/or unstable - basically expensive and dangerous to make and handle. Safer fuels (as commonly used) have less performance, but the difference is not "order of magnitude" as suggested by the show. A "super" fuel as depicted in the show simply could not exist, and anything approaching it could not be produced or handled on a shoestring budget.

Shortcut to the Moon

The "shortcut" to the Moon demonstrates a lack of understanding by the show's writing staff of high school-level physics. The premise in the show is that going into orbit first is a costly and unnecessary exercise which can be avoided by taking a straight-line path. From a common-sense perspective, you might think this is true. However, the laws of physics show that the lowest cost approach is (more-or-less) to loft yourself above the atmosphere (well, most of it), then accelerate to orbital velocity so you don't fall back to Earth, and finally accelerate some more to get onto a transfer trajectory toward your destination. In actuality, these steps are somewhat blended together, but the key point is that, for an energy-efficient rocket-propelled flight, you can't get away from a mad dash to at least orbital velocity at some phase in the flight.

The show threw in a few tidbits of "real science", but for the most part, sidestepped real physics and all sorts of problems which have to be solved to put a payload into space and deal with the space environment (zero gravity, no atmosphere, solar/cosmic radiation). This applies to both people and equipment. The show also distorted scale in all sorts of things, including the distance to the Moon and time required to traverse it, height of the atmosphere and (again) time required to safely travel between Earth's surface and a space environment.

The Apollo program was expensive, but it sought the "cheapest" possible route to the Moon in that the trajectory required the least (or thereabouts) amount of propellant possible at each phase. It also selected the most optimal propellant for each task.

What made Apollo expensive was partly that space is hard, and partly that the Kennedy mandate to go to the Moon had an aggressive timeframe attached to it. SpaceX is showing that access to space can be done less expensively, but you can only take things so far.

Just a few of the things that make rocketry and space travel expensive:

Yes, you can make a cheap rocket, but a cheap rocket won't get you to space. To get to "cheap" you have to sacrifice important things. It may be too fragile and break; it may be too heavy and not take you very far; it may not carry enough propellant and again not take you very far; it may be too inefficient (low ISP) and not get you going fast enough; things may not work when needed because they weren't properly designed or tested for the environment they are in when called upon.

Not the answer you're looking for? Browse other questions tagged orbital-mechanics rockets fuel cost cost-to-orbit or ask your own question.

3
What if the Shuttle went straight up?
-5
What kind of security while using solid propellent?

24
Petrol as rocket fuel
9
Is access to space becoming more affordable?
11
Are we capable (engineering-wise) of building a spacecraft in space?
7
Which is overall more expensive to operate for a final rocket stage? LH2/LOX or hypergolics like UDMH/N2O4?
6
How is manufacturing cost for a rocket engine design estimated based on drawings alone?
7
Why is fuel cheap compared to rocket?
3
What is the cheapest possible way to land a crew of 2 on the moon?
4
Rocket fuel cost to launch 1 kg to orbit
1
How much easier is it, to explore space from a low orbit satellite, than from Earth?