How unreachable are Jupiter's moons from Mars with the technology developed for going to Mars?

Jupiter's moons in their closest point to Mars (when Jupiter is closest to the sun) are like 7 times the distance between Earth and Mars, and in a return journey they will farther away. Is there any chance to reach them in the following decades? I would like to know how far the technology for going there is in a one shot journey, once humans are able to go to Mars, how much will they have to improve (in other topic someone mentioned that something that consumes fuel is the proximity to the sun pulling and decelerating the spaceship, besides from Mars escaping the planet will consume less fuel) to reach Jupiter from Mars, and also, how about if it's possible to set a permanent base in Ceres, Pallas or Vesta, for at least a partial resupply, could that help or be feasible at all?

Let's go back our old friend the Pork chop plotter. Earth to Jupiter using minimum fuel takes around 2 years and you get one opportunity per year, more or less, to get there. You can shorten the journey to perhaps 20 months with minimal extra fuel. The delta-V required at Earth (over and above escape velocity) is about 9.3 km/s (you can in theory aerobrake at Jupiter, although the velocities involved, and the radiation environment might make this a bit exciting). 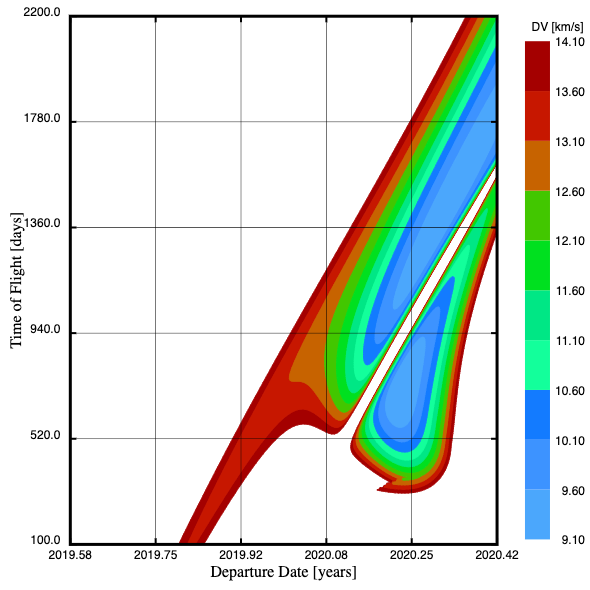 Mars to Jupiter with minimal fuel takes longer. Intuitively I think this is because Mars' orbital velocity around the Sun is lower. Journey times are around 30 months, but the delta-V needed (again over and above Mars escape) is only about 6 km/s.

A fully-fueled SpaceX Starship is expected to have about 9 km/s delta-V capability (with a very small payload) so it could reach Jupiter if refuelled in high elliptical Earth orbit, or possibly directly from the surface of Mars. Refueling in Low Mars orbit would certainly be enough. 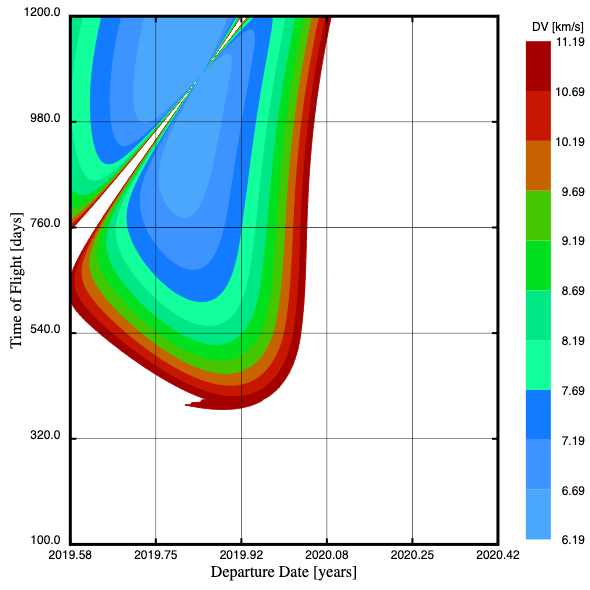 Bases on asteroids seem unlikely to help much. Matching orbit with them is too hard and you probably still have to get the fuel there. If you could make fuel on Ceres that would be quite appealing in terms of delta-V and payload mass, although the mission would get still slower.

TLDR: If you can make fuel on Mars, or on Ceres, it will help you move more payload to Jupiter without needing to launch insane amounts of fuel from Earth, but such missions are generally longer in duration than direct missions.

To expand in response to @Pablo's comment. The plotter page says:

The present application provides an extremely efficient (although approximate) solution of the Lambert's Targeting Problem (LTP) to produce launch and arrival v-infinity pork-chop plots between solar system targets selected by the user. The solution method is based on the works:

The equations/algorithms will be found in those papers, I assume.

I whomped up a spreadsheet to compare scenarios like this: Hohmann.xls. 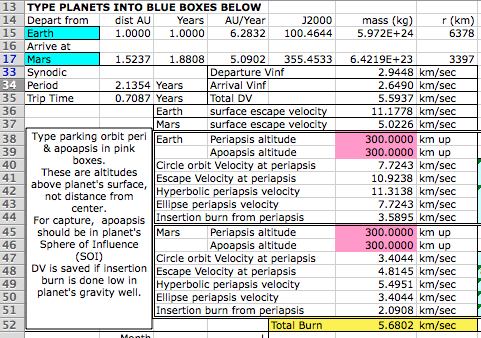 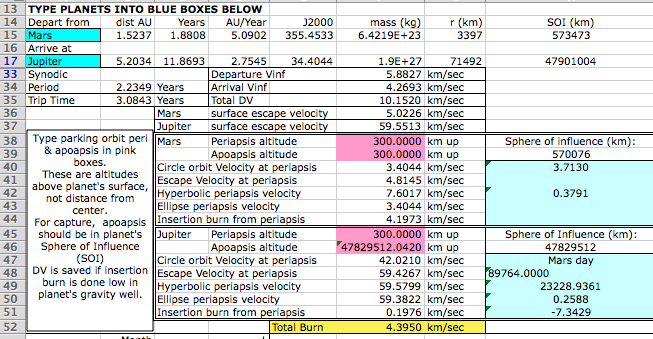 Matching orbit with a moon would take more. Altitude of Jupiter's larger moons can be found in cells J27 to J30. For example setting Jupiter's destination orbit at Europa's altitude boosts delta V to more than 10 km/s. This doesn't take into account Europa's gravity.

Caveat: My spreadsheet assumes circular, coplanar orbits. So accuracy is only ballpark.

TL;DR Going from Mars to Jupiter's moons is a lot harder than going from Earth to Mars.

Using @HopDavid's excellent spreadsheet, we get a delta-V of about 6.9 km/s for a 3 year mission from highly elliptical Mars orbit to Callisto, the only one of the large moons where the radiation level is survivable for humans. To that we need to add about 2.4 km/s for landing on Callisto (which has no atmosphere)

So, assuming Elon Musk's dreams come true and all the components of his Mars mission architecture come true, which might a Jupiter mission a decade or so later look like, if done this way?

The delta-V capability of a fully fuelled Starship is discussed here and is about 9.4 km/s with no payload, so not quite enough for our purposes, but close. I can see a couple of ways of tackling this:

Our next problem is keeping the crew alive for three years. We're going to need a nuclear reactor (solar power is getting a bit weak by this point) but once we have one, we have plenty of emergy, so we can recycle water and light a greenhouse to grow some food and clean the air. We can also recycle CO2 back to oxygen if we throw enough energy at it. For all of these the science is clear, but the technology will need some work. However they are more or less the same technologies we need to live on Mars. Even so we will need a fair amount of supplies to replace inevitable losses.

So we might need still more vehicles to fly alongside us full of supplies.

When we arrive, we're going to need a some infrastructure set up in advance. So like most plans for Mars missions, we will presumably have sent a robotic precursor mission a few years earlier to set up our base and fuel production. That could possibly be sent using a slow ion drive tug, rather than using up still more starships. The robots would need to find and mine both water ice and carbon dioxide ice to make basic materials for a human base and for return fuel. Ammonia ice, if present would be a handy source of nitrogen. This is certainly challenging for robotics, but again, Mars colonisation might drive development of robotic ice mining quite hard.

Eventually we'll want to return home. Returning to the spreadsheet we find we need 4.9 km/s to get from Callisto's orbit to a trajectory to Earth (a 2.7 year journey). With the additional 2.4 km/s to escape from Callisto, we are within the capabilities of our (now rather elderly) Starship although the reentry when we get to Earth is going to be a tough one (about 14 km/s), but we don't have a huge amount of payload, so we might need yet another starship (or maybe a fuel stash in Callisto orbit) to carry our food etc. for the return journey (which we have grown under lights on Callisto).

While we were there, our starship isn't a bad vehicle for exploring (provided we don't wear it out). It can do a takeoff, significant maneuvering in Jupiter space and still have fuel for a powered landing back on Callisto. Visits to the other large moons would have to be unmanned (or maybe very quick) because of the radiation.

So the conclusion is quite positive. Technologies we might expect to develop within a decade or so colonising and exploring Mars might let a few hardy (and patient) explorers put down a beachhead on Callisto. It would be expensive (throwing away multiple reusable launch vehicles) but there are no obviously impossible problems.

Not the answer you're looking for? Browse other questions tagged mars jupiter europa ceres spaceport or ask your own question.

9
Can five refillings of the BFR second stage be useful to get to the Moon? To Mars? All five in Earth orbit?

1
How would a robotic landing on an icy moon like Europa differ from landings on the Moon, Mars, Venus, Jupiter, Titan, asteroids, comets?
2
What are the travel times associated with different low-thrust accelerations going to Mars?
4
Why are most of Jupiter's moons retrograde?
12
Xenon vs Hydrazine, "Should I Stay or Should I go?" Dawn mission decisions
7
Terraform via moving Ceres To Mars orbit, using ion drive
8
Will the duration of traveling to Ceres using the same tech developed for going to Mars be proportional to the distance to go to Mars or not?
9
Is the far side of the tidally locked Europa moon safe from Jupiter's radiation?
20
Why are we interested in visiting the giant planets' icy moons?