How does InSight measure wind speed?

According to this answer to How can I find a daily record of the temperature on Mars? the weather at the InSight lander can now be seen online at https://mars.nasa.gov/insight/weather/ This includes the wind speed and I believe the direction (if that's what those little flags mean).

How does InSight measure the speed of the wind, and the direction? How do the sensors function? 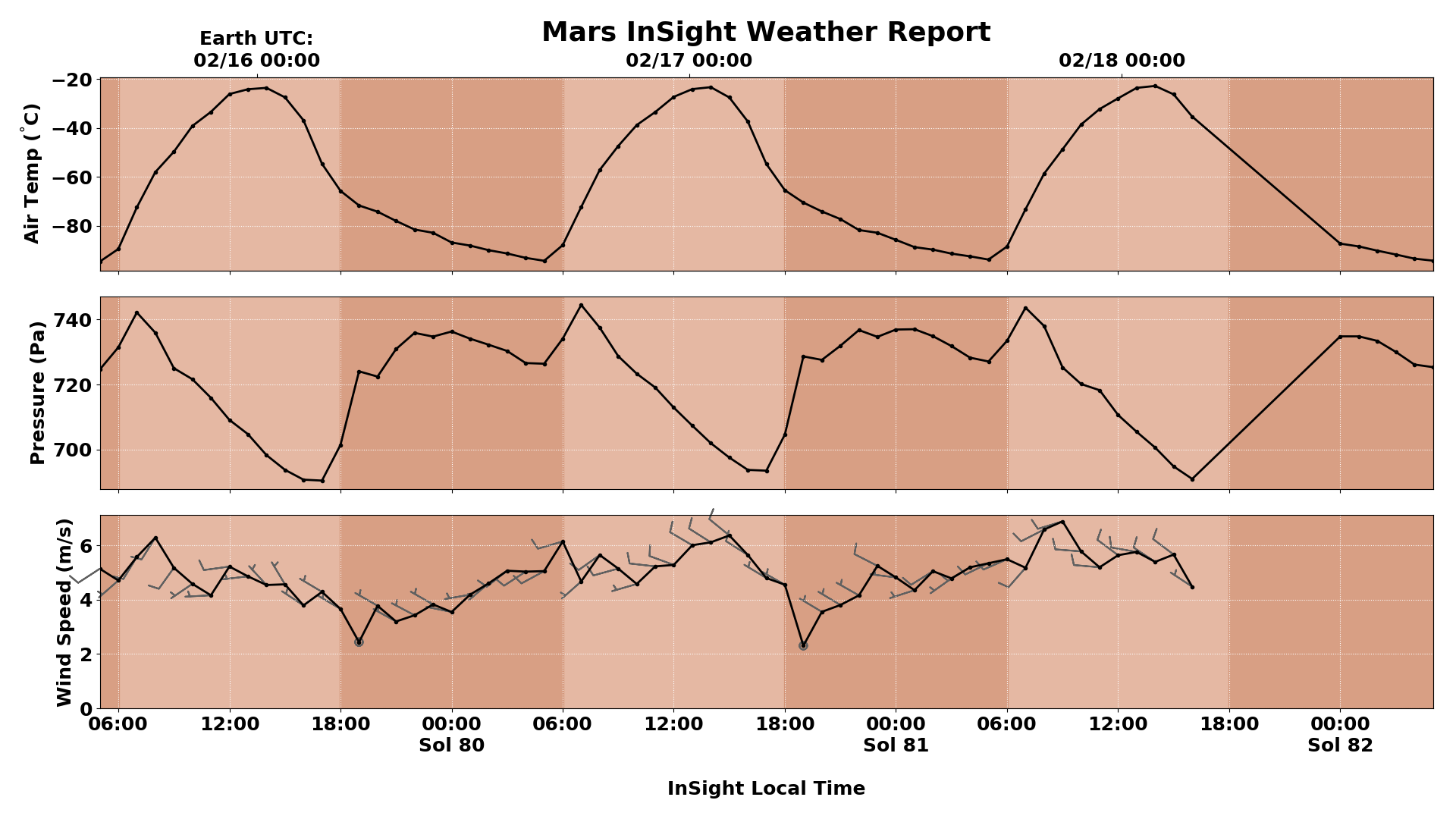 From the question Was the telltale on the Mars Phoenix Lander used for meteorology? Why not a hot wire anemometer instead?

below: Instrument as delivered to NASA. From the The Telltale project page on the Mars Simulation Laboratory. Also archived here. That's a 45 degree mirror below the telltale providing a simultaneous view from below. 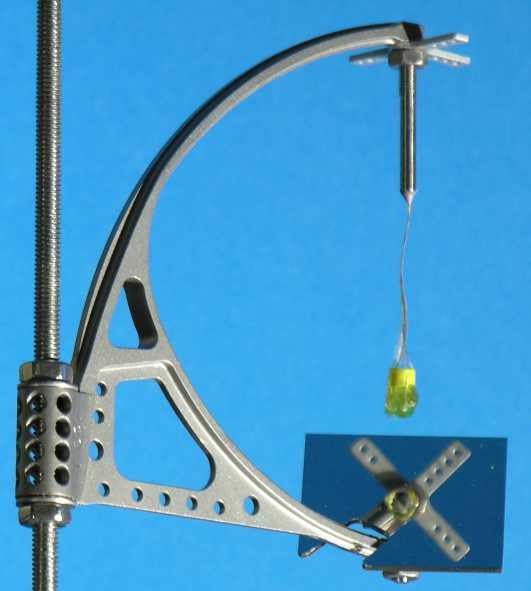 One of the smaller payloads on Insight is the Temperature and Winds for InSight (TWINS) payload developed by Spanish Astrobiology Center in Madrid.

You can see the location of the instrument on this picture.

The TWINS sensor is based on the Rover Environmental Monitoring Station (REMS) developed for Curiosity. I have been unable to find source data for TWINS beyond Wikipedia. Most sources I found are behind journal paywalls.

The Wikipedia article states that the instrument uses an anemometer to measure wind speed, but I think it is using the word "anemometer" in the general "wind measuring" sense rather than the spinning device with four little cups. 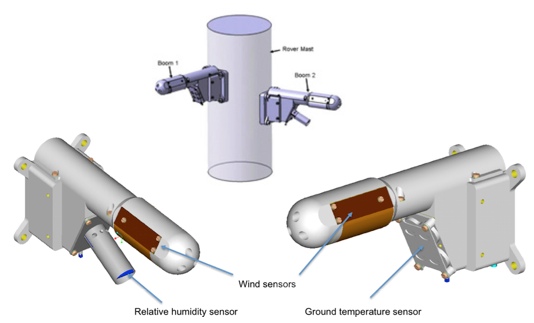 Wind speed and direction will be derived based on information provided by three two-dimensional wind sensors on each of the booms. The three sensors are located 120 degrees apart around the boom axis. Each of them will record local speed and direction in the plane of the sensor. The convolution of the 12 data points will be enough to determine wind speed as well as pitch and yaw angle of each boom relative to the flow direction. The requirement is to determine horizontal wind speed with 1 m/sec accuracy in the range of 0 to 70 m/sec, with a resolution of 0.5 m/sec. The directional accuracy is expected to be better than 30 degrees. For vertical wind the range is 0 to 10 m/sec, and the accuracy and resolution are the same as for horizontal wind.

According to and article in ExtremeTech the primary reason for the sensors is to calibrate atmospheric effects out of the seismic data. But as a secondary benefit we get weather reports like the ones you pointed to.

and the original paper:

This one is different, but related:

REMS follows Viking design and uses thermal anemometry to record the wind speed also. Hot wire anemometry is based on recording either the amount of power required to heat a wire so that it maintains a constant temperature difference with the ambient (CTA) or to record the temperature of the wire when supplied with a constant amount of power (CPA). The convective power is then calculated, which in turn is used to obtain the wind speed. The REMS wind sensors use a thin film instead of a wire: titanium thin film resistors patterned on the surface of a silicon chip (Domínguez et al. 2008).

How it works: Instead of using a classical hot wire anemometer, a hot film is used in much the same way. By putting multiple films on different faces of the probe, and using multiple probes in different directions, the 3D velocity (speed and direction in both azimuth and altitude) can be inferred later by comparing to CFD simulations. 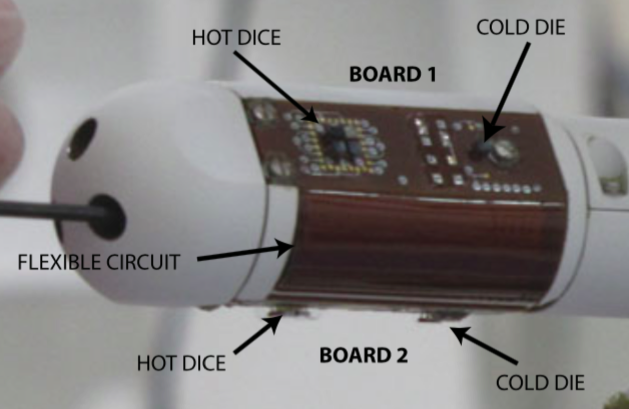 Fig. 19 Image taken during the REMS integration showing two of the WS boards. Each boom has three boards (Boards 1 and 3 in the sides, and 2 in the lower part of th boom) totally identical. Board 1 and 3 are connected to Board 2 by a flexible circuit and this is connected to the ASIC, in the back of the boom, by another flexible circuit. Each board has four hot dice and one cold die (the four hot dice are in the front of the board and the cold one is in the back). All dice are identical, manufactured in silicon, with three resistors printed on the upper side and thermally isolated from the board by four pillars with a low thermal conductance. In the hot dice, a resistor is used to heat it, another one is used as a sensor to measure the temperature, and the third one is used as reference sensor in the measurement circuit. In the cold die, the only resistor used is the reference resistor (for details see Domínguez et al. 2008). The control loop compares the temperature of the hot dice with that of the cold die, to control the power injected to keep a constant predefined temperature difference (delta temperature) between them. Each board has an additional thermistor on its inside face to monitor the board’s temperature and evaluate the conductive thermal losses of the dice. (Credit: NASA/JPL-Caltech) 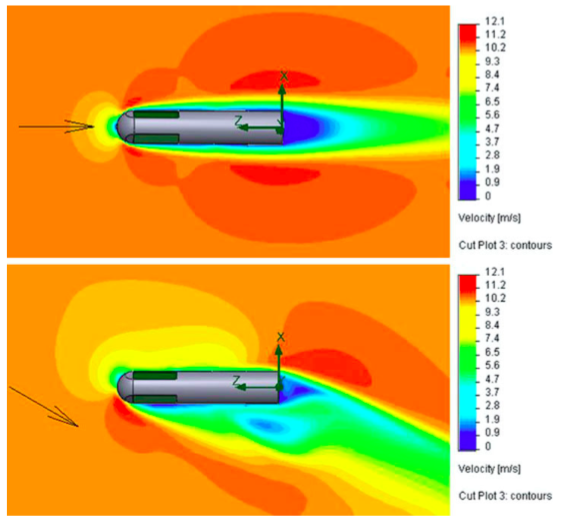 Fig. 15 Simulation of the boom model at different yaw angles. These results are used to be compared with real tests in the INTA Mars Linear Tunnel. The fluid was CO2 at 298 K and 72.8 mbar, with wind at 1 m/s. The top image represents a stream in the boom axis direction (yaw = 0°), showing a speed field with the same symmetry as the boom. The lower image represents a 30° incident fluid, in this case it is clear how one board is in the wake area, whilst the other one will see record the wind movement 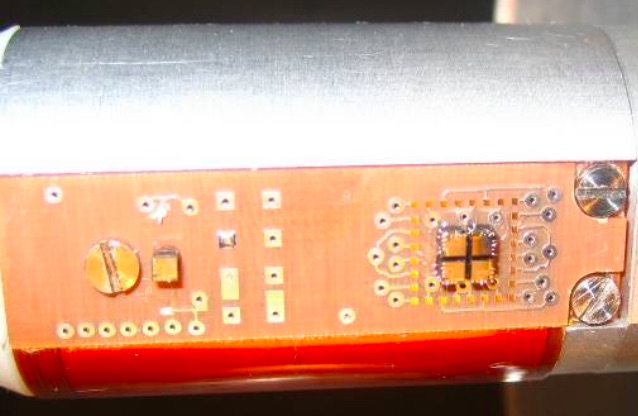 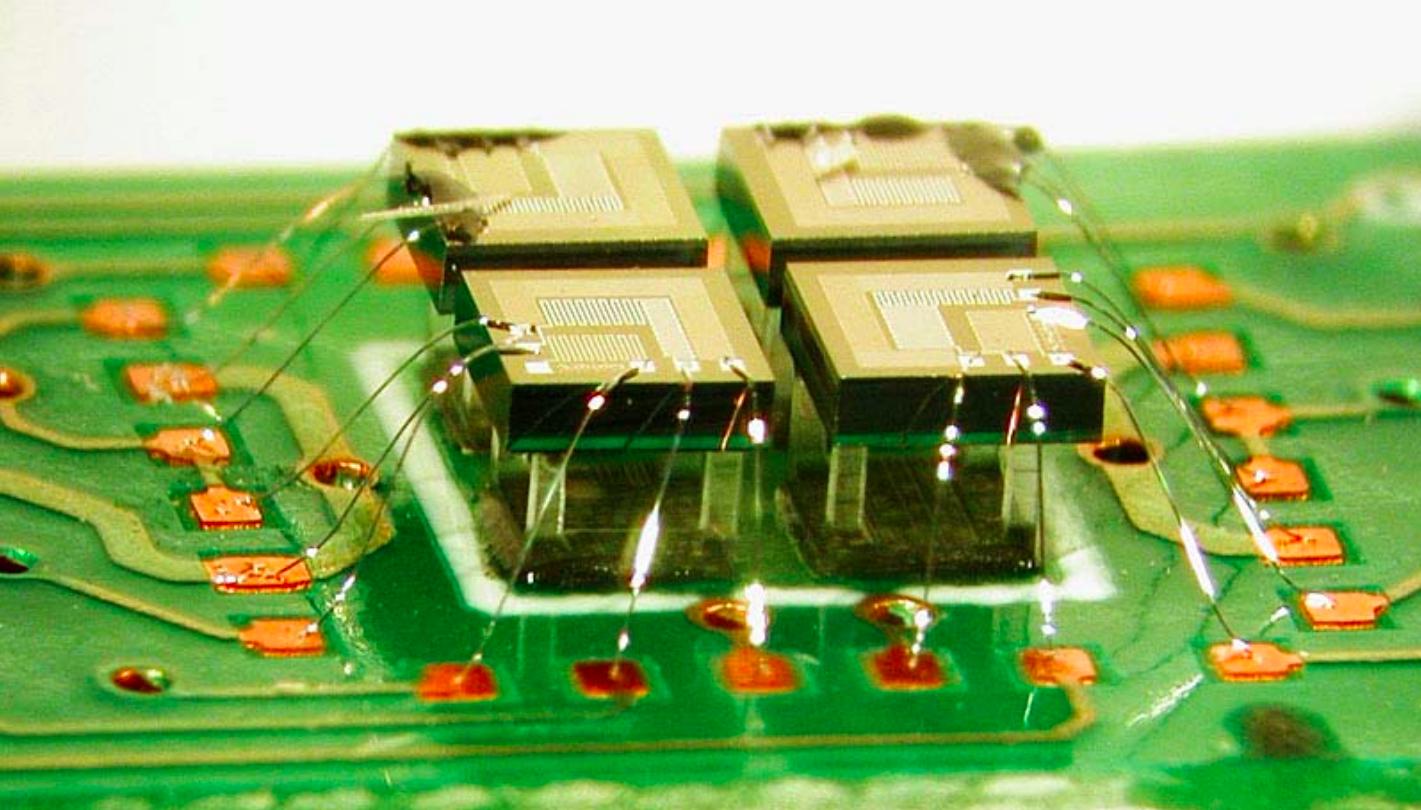 The two approximately ruler-sized wind sensors on Perseverance are encircled by six individual detectors that aim to give accurate readings from any direction, according to materials from NASA's Jet Propulsion Laboratory in California, which manages the rover.

Each of the two main wind sensors is attached to a boom that can unfold to move the sensors away from the rover as it drives, because the car-sized Perseverance does affect wind currents by its own movements through the thin Martian atmosphere, JPL officials stated. 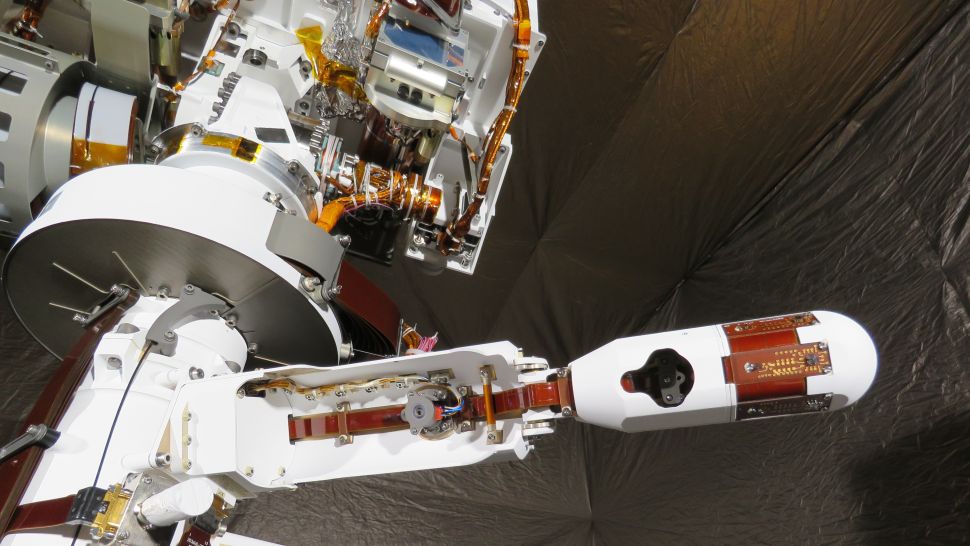 The Perseverance rover deploys one of its wind sensors on the Mars Environmental Dynamics Analyzer (MEDA) during practice activities on Earth in 2019. (Image credit: NASA/JPL-Caltech)

21
Is this white stuff seen by the Mars Phoenix Lander water or carbon dioxide ice?
16
Would the national flag planted by astronauts on Mars need an upper horizontal pole like the ones on the Moon?
10
How can I find a daily record of the temperature on Mars?
9
What could Perseverance listening to Ingenuity reveal?
1
How does the wind behave throughout the day in Jezero Crater? (worried about Ingenuity)
1
How many bubble levels have been used in space? Were any of them used some place besides the Moon?
1
Was the telltale on the Mars Phoenix Lander used for meteorology? Why not a hot wire anemometer instead?

5
How can the two MarCO cubesats remain reliably close to InSight during their six month trip to Mars?
4
How do Mars spacecraft control attitude on final descent and landing?
4
What are InSight's barometric and seismic digitization rates and frequency responses when it "listens to the wind"?
7
Does Mars have a known "prevailing wind" direction?
2
Images of Mars Phoenix Lander showing what's happened after more cycles of winter ice build-up?
4
How are martian dust devil maps made?
3
Have any Mars surface spacecraft had downward-pointing radiometers to measure the surface temperature? (not air temperature)