Why didn’t the space shuttle’s engine-out checklists include steps for attempting a relight?

Throughout much of a space shuttle ascent, even a single SSME failure would have left the mission’s intended orbit out of reach and forced some sort of abort; a two-SSME-out situation would have left the shuttle unable to achieve any orbit at all unless it occurred fairly close to the time of nominal MECO, and the loss of all three SSMEs would, unless it occurred during one of a few short windows, force the crew to bail out over the Atlantic and leave the orbiter to crash. An engine failure during an RTLS abort (where the performance margins would be even tighter than during a nominal ascent - especially given that one of the main reasons for performing an RTLS abort in the first place was if one SSME had already failed) would be even worse; the orbiter would still probably have been able to make it back to land on two engines, but going down to a single engine would have forced a bailout unless it occurred either very late in the RTLS sequence or (for high-inclination flights) during a short window prior to powered pitcharound, and a three-out during an RTLS would, for much of the RTLS sequence, result in a loss of control and the orbiter subsequently disintegrating in flight. And, yet, nowhere in the shuttle engine-out and abort checklists is there any mention of attempting to restart the failed engine, despite the fact that many of the situations that could cause an SSME to fail would still leave it safe to restart - for instance, a hiccup in the combustion process resulting in a brief overheat, or a bubble entering one of the fuel lines and causing a momentary drop in fuel flow, or a failed sensor causing a good engine to spool down before the sensor could be taken offline.

Given the potentially dire consequences of an SSME flaming out, why didn’t the shuttle’s engine-out procedures call for attempting to relight the failed engine?

It was impossible to restart the engines in flight.

If for no other reason, the pressure/temperature conditions for the "start box"1 were not met in flight. Also, Post Shutdown to Engine Ready was not a legal transition in the controller flight software. There were also considerations of engine drying (removal of residual water after shutdown), prelaunch purge sequences that had to be done, and other criteria that couldn't be met. There is some discussion here, but largely unsourced.

This diagram from the Pocket Data Book shows the start box. 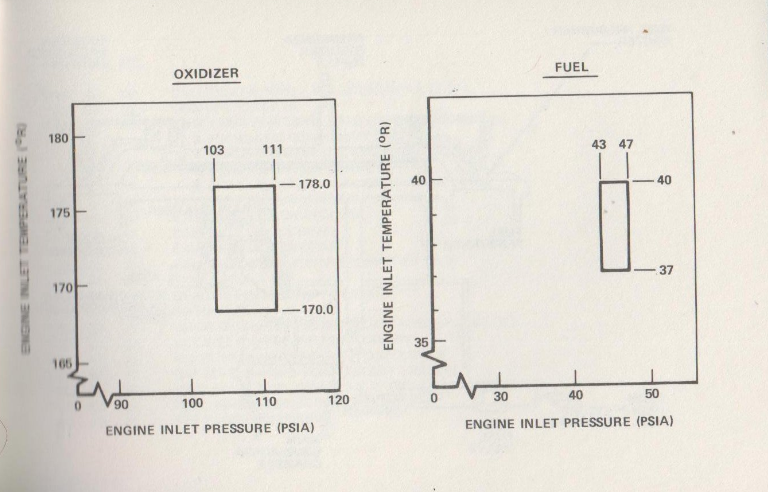 Work was done to expand the start box with the hope of using the SSME for other vehicles but it never reached the stage of flight readiness. (source)

The impossibility of restarting the SSME in flight was a major reason for the failure of the Ares 1 design. A single air start might have been doable, but not restarting for any orbit adjustment burns. Once this was realized, the substitution of the less efficient J2 engine started, with subsequent vehicle weight growth etc, etc.

4
Could the SSMEs of the SLS do retro burns?
4
Are there any rocket engines in current or former use that aren’t normally restarted in flight, but have the capability for an emergency restart?

19
What would have happened if only one Space Shuttle SRB ignited?
4
Did Apollo have provisions for "system aborts" during ascent?
4
Could Dick Scobee have flown a RTLS on Challenger 51L
4
Why would a space shuttle have flown a normal first-stage and early-second-stage ascent trajectory during an RTLS abort?
2
Why didn’t the space shuttle external tank have pressure-relief vents?
4
Are there any rocket engines in current or former use that aren’t normally restarted in flight, but have the capability for an emergency restart?
2
Space Shuttle RTLS in 3-engine-out: what does it use for propulsion?
6
What were the space shuttle’s emergency procedures for an SRB or ET separation failure?
7
What engine-out capabilities does SLS have?