Why didn’t the space shuttle external tank have pressure-relief vents?

During a space shuttle abort, it would have been vitally important not to allow the vehicle to droop below 265 kilofeet during powered flight, as excessive aerodynamic heating below 265 kft would have caused the external tank (ET) to explode (see page 18 of the linked PDF); if the shuttle could not have been kept from drooping below 265 kft, its engines would have had to have been shut down immediately and the ET jettisoned before it burst. Due to this constraint, low-energy situations where the orbiter would otherwise have been able to successfully reach a TAL site (for instance, two engines out, or one engine out and one stuck at 67% throttle, early in second-stage flight) would have instead ended in a forced early MECO and a bailout over the open Atlantic, and even single-engine aborts during the middle third of second-stage flight (where the orbiter would be capable of reaching a TAL site) would have had their margins of safety seriously degraded by the need to fly at a very high angle of attack during powered flight to stay above 265 kft.

If the ET had been equipped with pressure-relief valves to vent boiling hydrogen safely overboard and prevent a rupture, this constraint would have been eliminated, and lower-energy aborts would have been able to concentrate on gaining horizontal speed rather than having to worry about minimizing their sink rate, resulting - in many cases - in the orbiter making it to a runway rather than coming down in the drink.

Why, therefore, wasn’t the ET equipped with pressure-relief vents to eliminate the thermally-imposed 265-kft droop constraint?

Your question is based on a misunderstanding- the External Tank propellant tanks did in fact have relief valves. 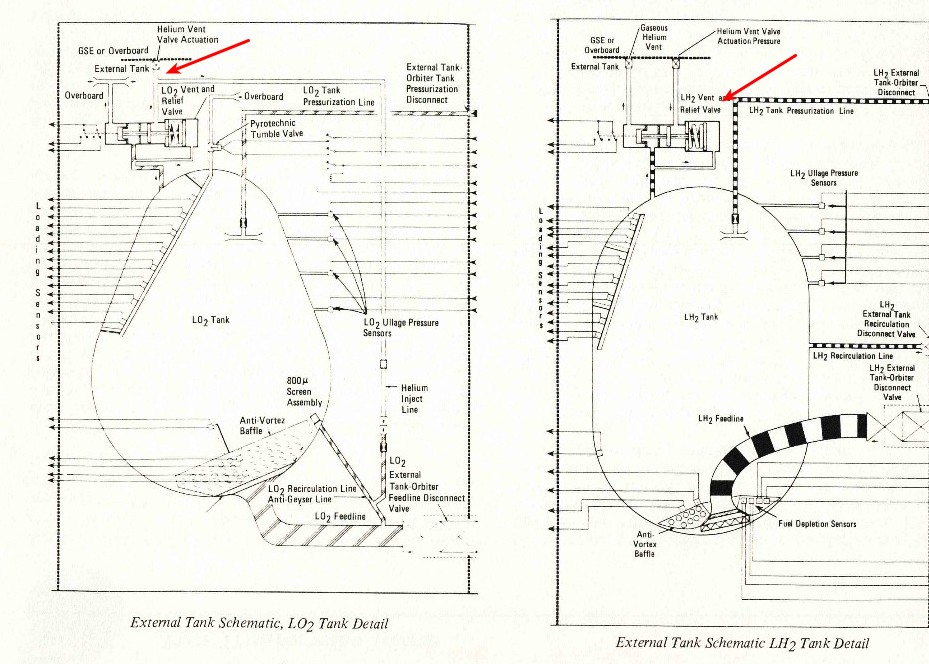 If venting occurs while the vehicle is in first stage, a fire could propagate along the side of the external tank (reference PRCB presentation February 10, 1987 and the 32nd PSIG).

Failure of a relief valve to close after venting could also be catastrophic due to loss of LH2 Net Positive Suction Pressure.

Also, propellant tank vent valves are not sized to protect the tanks from catastrophic events - as in the case of a helium sphere rupture on a SpaceX flight in 2015. They are intended to protect against credible failures of the pressurization system. See also Do the propellant tanks of actual (not planned) expendable vehicles' upper stages have relief valves?

Not the answer you're looking for? Browse other questions tagged space-shuttle design safety abort external-tank or ask your own question.

9
Do the propellant tanks of actual (not planned) expendable vehicles' upper stages have relief valves?