Why is that max-Q doesn't occur in transonic regime?

Do the rocket scientists design the launch in a way that the max-Q always occur outside transonic region?

Max-Q is a function of both altitude and velocity. There isn't any reason in particular that it needs to fall at a particular Mach number. It's just the point at which the rate that atmospheric density is falling outpaces the rate at which the square of the velocity is increasing. Nothing more.

Here's a very simple model of a Faux Falcon 9 launched vertically, with no turn towards horizontal. That doesn't matter so much at the altitude at max-Q but the final altitude at MECO is higher than in the videos because it hasn't turned towards horizontal. There are several simplifications, but it should reproduce most things in a qualitative way.

The final velocity is a little high but that may be related to the model not throttling back near max Q, or to other approximations. 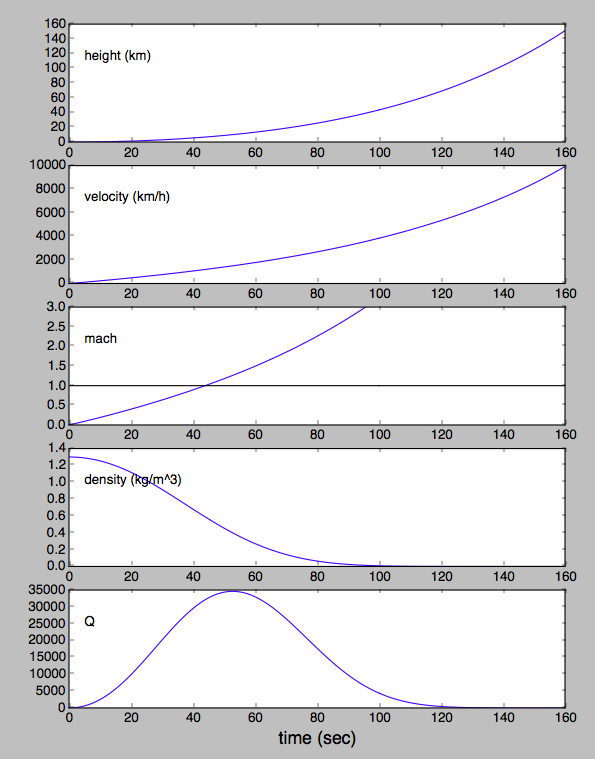 No. Rockets need to be optimized for various, contradicting requirements:

The planned trajectory of the vehicle is a compromise between them.

There is no direct reason to close out a sub-sonical max-Q. It simply didn't happen on engineering optimization reasons until now.

Not the answer you're looking for? Browse other questions tagged rockets mission-design or ask your own question.

2
Does MAX Q during rocket launch only say that rocket experiences max dynamic pressure?
87
How much bigger could Earth be, before rockets wouldn't work?
9
What is the typical mach number at which the peak dynamic pressure occurs?
2
Is it possible to calculate Max-Q without having to input an altitude

1
Can planet Earthtoo put a Tooian in orbit too?
26
Why do some rockets not ignite all their engines during liftoff? (GSLV MK3 LV)
17
Why is (conventional) ramjet not used for 2nd stage of rocket propulsion?
5
Why are some rockets orange?
2
Pressure levels inside rocket liquid oxygen tanks?
5
How to select appropriate orbital rocket stage thrust?
2
Why the max dynamic pressure might not happen at maximum drag instant?