Could an Apollo mission be possible if Moon would be Earth like?

I suspect that actual technology results in the apparently paradoxical situation that is easier to visit the moon rather than a comfortable planet able to sustain life. I am obviously supposing the crew must return to Earth.

Am I correct thinking that if there would be a copy of Earth at the place of the Moon not manned missions would have been yet possible? This seems obvious but is rarely realised by people in general.

Similar (just similar) considerations apply to manned mission to Mars, which are getting more and more discussed in divulgative TV channels but seems to me almost totally fictional, at the current stage.

(I consider the various energy requirements for getting there, braking, descending, and back, and life sustaining stuff such as food, water and breathable gas. While the design of Apollo did it for the Moon, a two ways trip to a Earth like moon or Mars differ by many points and seems to me currently impossible.

Please note that I am aware that replacing moon with an Earth would change the solar system and perhaps a binary planet system orbiting a star is even physically impossible. I am concerned with distance and escaping speed only).

Edit: I would like to stress that I could have place two earth masses of concrete in my question instead of a couple of earths. Atmosphere is important in the sense that there are different braking mechanisms / dragging etc. There is not much emphasis in my Q about habitability, except that I have mentioned that counter-intuitively is easier to go to the moon than to some kind of a big planet supposed to have a breathable atmosphere. Just to avoid debate not inherent here.

I think the answer depends on what you mean by "Apollo-style". It would not be plausible to use a single rocket to do a second-earth-orbit-rendezvous mission, for the reasons other answers have indicated.

But if you only want to use Apollo-style technology to go to the second Earth and back, I think there are more possibilities. Steve Linton and ANone sketch out some ideas for that. But I thought it was worth painting a more intuitive picture of the issues.

Getting there is easy enough. The lander would have to be more robust than the LM, but if everything required for return is handled separately, the weight budget probably would work out.

When the astronauts are ready to come back, they will need a rocket powerful enough to get them to orbit (so, much smaller than a Saturn V since it doesn't have to send them back to our Earth), and waiting for them in orbit they will need a fueled-up return craft. Those could be ferried into place, in pieces if necessary, using multiple Saturn launches.

The biggest challenge would be safely landing the return-to-orbit rocket on the second Earth. I'm arguing that the mission would be possible, but this task could be the step that would thwart 1960s engineers.

Under (very stretched) assumptions that the "Other Earth" would not affect Earth's natural conditions, then an Apollo-like mission would be impossible.

Tyranny of the rocket equation makes the launch mass to scale exponentially with delta-V budget. The enormous Saturn V rocket was capable of lifting and launching towards the Moon the command/service module and the lunar module, and little more than that. Compare scale/size of these - the Apollo spacecraft in upper right corner to the rest of the rocket. 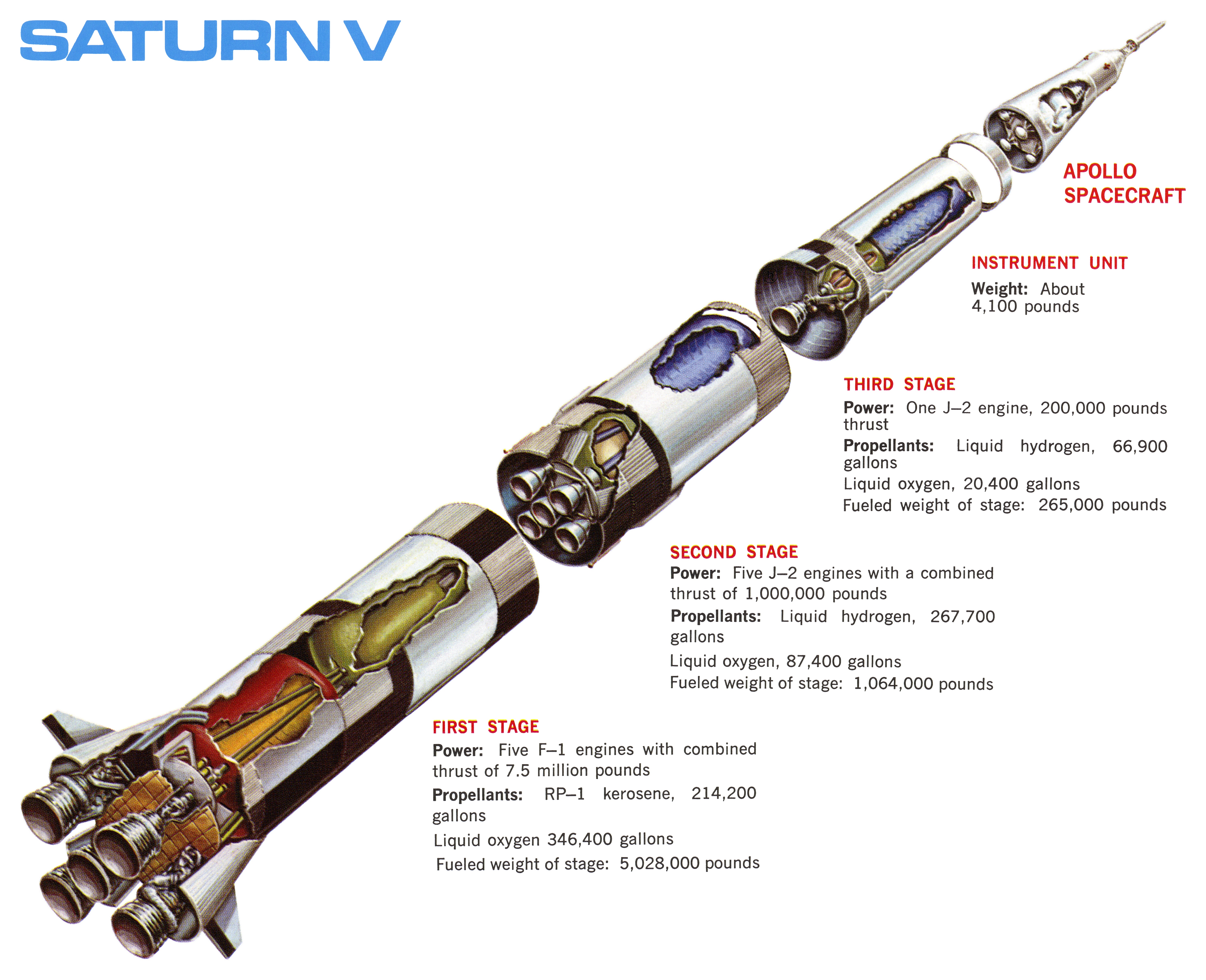 Now instead of the lunar module, you'd need an entire stack of size comparable to Saturn V - additionally, capable of soft landing in the rough terrain of the uninhabited "other Earth". And now you need to add a rocket to bring it to the "Other Earth" - one, that by size, comparing to Saturn V, is as Saturn V is to the Apollo spacecraft. And obviously, by cost too.

The same style mission would be plain impossible. The delta-V to take off from Earth is high enough by itself. Doubling it, scaling the mass ratios exponentially yields an impossibly huge construction.

That is not to say a successful mission including return couldn't be launched. If the other planet was inhabitable, a permanent colony could be established with multiple one-way missions delivering supplies and technology. Utilizing in-situ resources and technology from Earth, the colony could construct rockets capable of entering the "Other Earth's" orbit, where they could rendez-vous with vehicles resembling Apollo CSM and the crew could use it to return to Earth. Thing is the timeline between first landing and first return would be decades, not two weeks.

Yes, I think this would be possible, though I doubt plausible at the time of the Apollo missions. We don't currently have anything that would let this happen. The direct approach is sort of out: You'd need order of 500,000 Kg to the other earth, Current tech means takeoff weight would be about 100 higher than this: 50,000,000 Kg. This is a bit silly, but with reusable rockets in-orbit construction etc maybe sort of do-able. The earth-MKII rendezvous is a bit more plausible. 100,000 Kg to the surface + 20,000 Kg in orbit which leads to a 12,000,000 Kg rocket if you could aero-brake without wasting anything. Pure guesswork here as how would make a big difference but maybe 20,000,000 Kg would make that work.

I can't see anyone making an order of magnitude bigger than an Saturn-V rocket to go to the moon, but if we had a twin earth... I like to think we'd give it a shot.

While one way mission may be much easier to do and deliver the larger payload (no rocket fuel is required to land on a planet with the Earth-like atmosphere), returning back does not look doable as the landed spacecraft made only tiny part of the initial rocket, required for covering the distance.

Hence one way robotic missions and later probably colonization would be much more in the emphasis.

Suppose we had a double planet, two bodies of the mass of the Earth, both with atmospheres roughly as dense as the Earths and as far apart as the Earth and the Moon. Let us call them Earth-1 and Earth-2

The hard part is getting back into low Earth 2 orbit and then breaking away from that orbit to get back to Earth-1. You don't need a whole Apollo stack, but something at least as powerful as the Atlas LV-3B used for Mercury. This masses about 120 tons ready to launch, so you'd need to aim to land about 150 tons on Earth-2. About 10 times the mass of the Apollo LEM (including its descent fuel).

You'd also need more fuel to get a return rocket out of Low Earth-2 orbit.

You also mention this being "currently" impossible, which I'm going to take to include in development systems, especially the SpaceX SuperHeavy/Starship combo, which I will, optimistically, assume works as currently portrayed by SpaceX.

A Starship refuelled in Earth orbit has more than enough delta-V and reentry capability to land intact on Earth-2. So again we face the challenge of getting back.

The same Starship, fully fuelled and with zero payload, has a delta-V capability of about 9.4 km/s, very very nearly enough to reach orbit, so we need to find a way to (a) refuel it on Earth-2 and (b) add a modest booster or upper stage increasing its capabilities enough to get a small payload into LE2O ready for return. A booster would let us reuse the Starship (just refuel it in LE2O and head home). An upper stage would mean abandoning it to burn up (or maybe land on E2 again) while the crew and scientific samples rendezvous in LE2O with a separate return vehicle.

If you can find, or make, methane and oxygen on Earth-2 then refueling is not too hard. Similar technology is being developed for Mars. If not, you will need to land a number of disposable tankers on Earth-2 each carrying as much fuel as it can safely reenter and land with. You might be better instead to fall back on using a smaller, disposable rocket to get the crew and samples back (like the Atlas LV-3V) and just abandon the vehicle you used to get there.

The question is vague about what it means by "Earth-like". Let's look at some increasingly Earth-like scenarios on the second planet (which I shall call "Terra").

17
Feasibility: self-sustaining colony on Mars vs. Space Station
2
What would be the effect of increasing the mass of Mars?
6
How plausible are the predictions made by Stephen Petranek at TED?
3
Bombing Moon and Mars: What would it look like?
7
Terraform via moving Ceres To Mars orbit, using ion drive
1
Would a debris field on Mars look like one on either the Earth or the Moon?
27
Would Earth fireworks work on the Moon or on Mars?