What could go wrong if someone overpowered an ion engine?

The X-3 ion engine is the most powerful ion engine ever made, and puts out an astounding 5.4 N of force, using 103 kW. It's fuel is inert xenon gas, ionized and heated to a plasma. Now, what would happen if someone used hydrogen gas instead of xenon to "overpower" it? Would that be useful someday, for interplanetary travel? 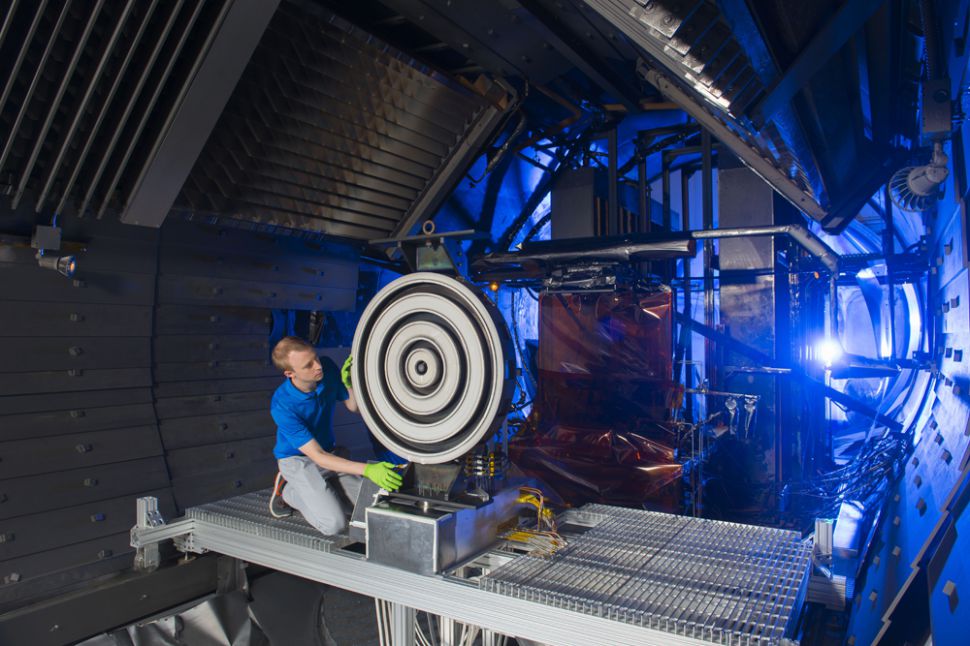 While @Hobbes points out you get less momentum per atom or per unit charge for lighter ions, assuming charge is +1 and acceleration voltage is constant, that's not the whole story.

The momentum of a particle accelerated to a kinetic energy $E = qV$ is:

So Hydrogen atoms give $\sqrt{131} \approx 11.4$ times less impulse or "kick" per atom, or per unit charge from your high voltage supply.

However that hydrogen atoms weights 131 times less than an atom of Xenon. So per kilogram of propellant, you get $\sqrt{131} \approx 11.4$ times more impulse or "kick" per kilogram, so if everything else were equal, hydrogen would be a much higher Isp propellant than Xenon!

Hydrogen is second the most difficult atom to ionize after helium, but the difference is not huge. Starting with H2 gas, you need about 4.5 eV just to break a hydrogen molecule into two neutral atoms, plus 13.6 eV to ionize each one. Xenon is an easier gas to ionize at only 12.1 eV.

The reason ionization is important to consider for a spacecraft is because the mass of an ion engine is tied up in the power supply and plasma-confining magnets necessary to produce the high current of medium-energy electrons in the plasma that ionize the atoms during energetic collisions.

So going from xenon to hydrogen gives you over a factor of ten in Isp, and the next step would be to lower your spacecraft mass by using a low ionization potential material. That's a separate question.

Using hydrogen instead of xenon would make the engine less powerful. The engine works by accelerating ions. When you replace heavy xenon ions with very light hydrogen ions, thrust is reduced a lot.

9
Using water as a high density storable hydro-lox propellant
7
Have light gases like hydrogen or helium been explored for ion propulsion?
3
Using nukes to push an incoming meteoroid off course
3
"Hybrid" ion engines?
3
What performance specification would be lower for Krypton than for Xenon in Hall effect thrusters?
6
What are the parameters of the new Iodine electrical rocket engine developed by RSC Energia?
5
Where can I learn to calculate the physics of an ion thruster?
2
MARS-CAT; What is a Cubesat Ambipolar Thruster and how does it work?
2
Molecular propellant in ion engines
0
What are ways to store hydrogen for electric propulsion without a heavy pressure vessel?
See more linked questions

19
What contributes the majority of the mass in an ion drive?
2
Could chemical energy quicken ion propulsion?
3
Ion engine: purpose of magnet rings
14
If LOX/LH2 were used in a fuel cell powering an ion engine could it provide a greater delta-v than with a conventional engine?
6
What ion engine is used by Hayabusa2?
8
Will an array of multiple ion engines still be more efficient than a single chemical engine?
2
In theory, how much thrust could an ion thruster generate?
3
Estimating thrust and kg fuel for a generation ship's journey to Alpha Centauri
3
What's this small source of glowing blue plasma next to Psyche's Hall effect thruster for? What does it do and why does the plasma curve and connect?