Time to fall into the Sun from Mars orbit

If a body starts to fall freely from Mars orbit towards the Sun, then how can we calculate the time to touch the Sun' surface?

I have tried the third equation of motion that says R=(1/2 dg)*dt^2. Then what must be the limits? If needed, you can add a comment for the work I did and want it as a pic.

A quick-and-dirty way to get an approximate answer is to note that, as the initial orbital velocity of the body approaches zero, its orbit will approach a (degenerate) ellipse with a minor axis of zero and a major axis equal to the body's initial distance from the center of the Sun (i.e. the radius of Mars' orbit).

In particular, this means that the orbit will have a semi-major axis equal to half the initial distance of the body from the Sun, i.e. half of the semi-major axis of the (approximate circular) orbit of Mars itself.

Since we know that the period of an elliptical orbit is proportional to its semi-major axis raised to the power of $3/2$, this means that reducing the semi-major axis of an orbit by one half will reduce the orbital period down to $1/2^{3/2} = 1/\sqrt8 = \sqrt2/4 \approx 0.35$ times the original period.

As the time it takes for an orbiting body to fall from the apoapsis of its orbit down to the periapsis is exactly half of its orbital period, this means that your initially stationary body will fall to the Sun in a time that is $\sqrt2/8 \approx 0.18$ times the orbital period of a body in a circular orbit at the same initial altitude (such as, in this case, Mars).

We can then look up the (sidereal) orbital period of Mars and multiply it by $\sqrt2/8 \approx 0.18$ to get the solution to your question.

Ps. This method does make a couple of approximations worth noting. One is implicit in the question itself, which merely specifies the starting altitude of the body as "Mars orbit", without further specifying whether that means aphelion, perihelion or somewhere in between. In effect, this method assumes that the starting altitude is "somewhere in between", specifically at the semi-major axis of the orbit of Mars.

The other notable approximation made is that we're effectively assuming the radius of the Sun to be negligible. As the Sun's radius is less than 0.3% of the semi-major axis of Mars, and as the falling body will in any case spend the majority of its fall time in the outer parts of its orbit where it's moving slowest, the error introduced by this approximation will be even less than that. Compared to the roughly ±14% uncertainty introduced by the poorly specified starting altitude due to the eccentricity of Mars' orbit, that is indeed negligible.

Since @IlmariKaronen's answer was given some skepticism and hasn't yet been accepted time, I'll back it up independently so that it might receive the credit it deserves!

Watch the video Gravitational Attraction: Time it takes for 2 objects to collide in free space and after 27 minutes of analytimagical manipulations we get the same result! 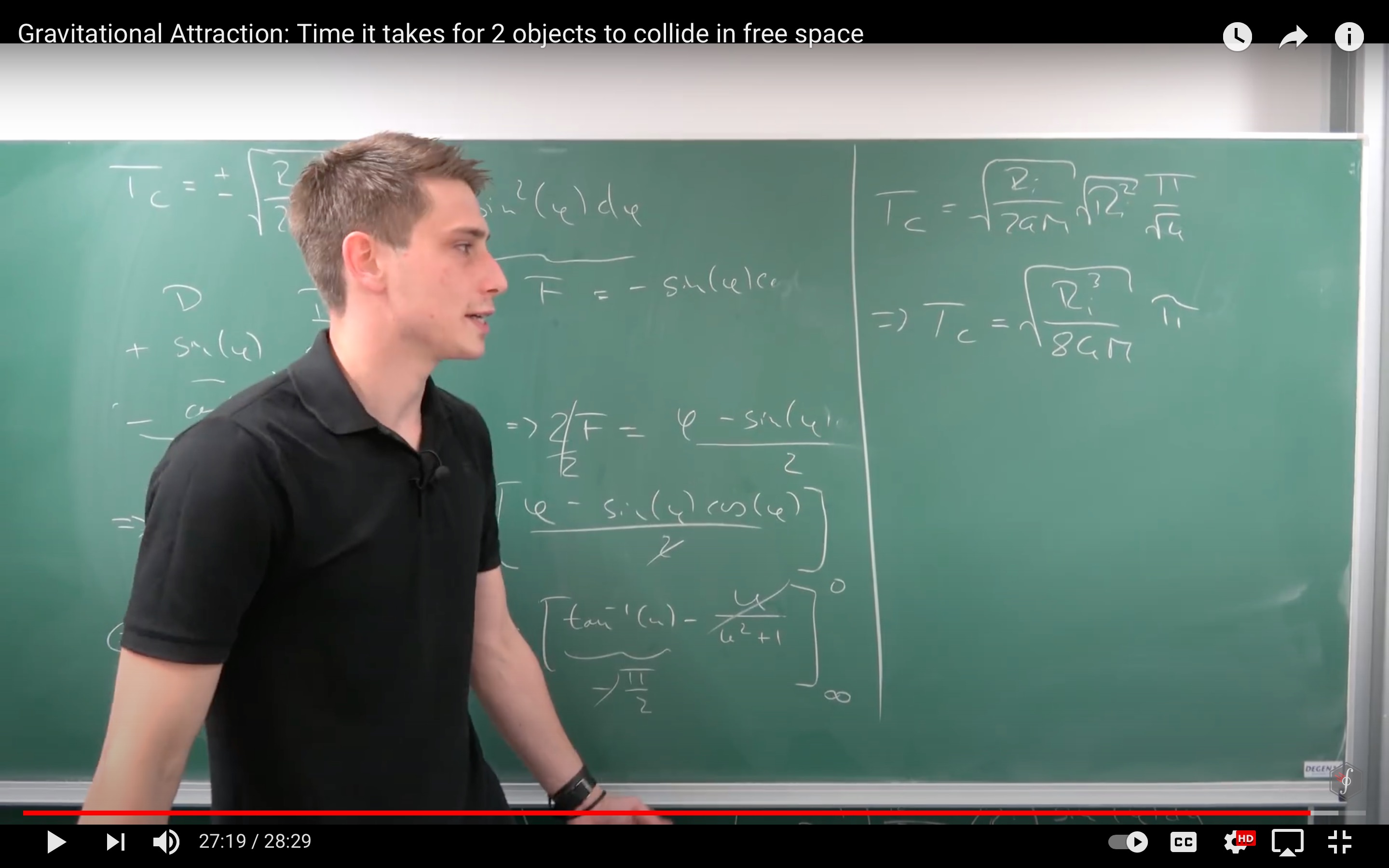 Not the answer you're looking for? Browse other questions tagged orbital-mechanics gravity or ask your own question.

7
Hohmann Transfer Equation of Motion
5
Perifocal coordinates and the orbit equation
2
Reference frames - why do I need to convert to Geocentric Equatorial State Vector to solve equation of motion?
8
How did the Apollo guidance computer handle the Earth-Moon system's rotation around the Sun?
4
Do Lagrange points still exist if there is significant radiation pressure on the third body from the first?
3
Simple explanation for the 2nd "cosmic speed"
3
Launch Elements
1
Calculating the time of flight between two anomalies gives a negative result?
2
Wrong position during orbit propagation in Unity