From what I read online, reaching these asteroids require a delta-V higher than the delta-V required for a moon landing, due to their orbit.

Is it feasible to stabilize those asteroids in their respective L4 and L5 Lagrange point, as a way to reduce the delta-V required for future missions?

The potential deltaV required to get to these objects could be substantially lower relative to other nearby objects of interest. Currently, the only known Earth Trojan asteroid, 2010 TK7, has such a large inclination (20.9°) that the delta-V required (9.4 km/s) would make it challenging to visit [1]. Investigating Trojan Asteroids at the L4/L5 Sun-Earth Lagrange Points.

tl;dr: Inclination change. Yikes! You would have to reduce their inclinations. It's better to consider a longer transit and tilt your own inclination with an Earth fly-by each time you go, than to change the inclination of the asteroids themselves.

The OP"s link in turn links to the paper in Nature Earth’s Trojan asteroid and a non-paywalled copy can be found at one of the authors' site http://www.astro.uwo.ca/~wiegert/papers/2011Nature.pdf

Earth Trojan asteroids have been proposed as natural candidates for spacecraft rendezvous missions. However, the large inclination of 2010 TK7 results in a Δv of 9.4 km/s being required, whereas other near-Earth asteroids have values of Δv less than 4 km/s. The reported absolute magnitude, 20.7 mag, puts the diameter of 2010 TK7 at 300 m with an assumed albedo of 0.1 (ref. 22), which makes it relatively large among the near-Earth asteroid population. No spectral or colour information is as yet available to determine whether the asteroid is in any other way unusual.

2010 SO16 has a horseshoe orbit that allows it to stably share Earth's orbital neighborhood without colliding with it. It is one of a handful of known asteroids with an Earth-following orbit, a group that includes 3753 Cruithne, and the only known asteroid in an horseshoe orbit with Earth. It is, however, neither an Aten asteroid nor an Apollo asteroid because the semi-major axis of its orbit is neither less than nor greater than 1 AU, but oscillates between approximately 0.996 and 1.004 AU, with a period of about 350 years.[5] In its ~350 yr horseshoe cycle, it never approaches Earth more closely than about 0.15 AU, alternately trailing and leading.

2010 TK7 is a sub-kilometer near-Earth asteroid and the first Earth trojan discovered; it precedes Earth in its orbit around the Sun [...] 2010 TK7 has a diameter of about 300 meters (1,000 ft).[4] Its path oscillates about the Sun–Earth L4 Lagrangian point (60 degrees ahead of Earth), shuttling between its closest approach to Earth and its closest approach to the L3 point (180 degrees from Earth).

So both asteroids are in heliocentric orbits with semi-major axis very close to Earth's 1 AU. This allows Earths' relatively weak gravitational attraction (relative to the Sun's) at order 1 AU to "lock" them into one kind of resonant behavior or the other.

2010 SO16 is associated with Lagrange point L3 but wanders so far behind and ahead of it that the orbit is called "horseshoe", and TK7 is associated with L4, but also wanders so far behind and ahead that it alternately approaches L3 and Earth. Either way, when you look at their orbits from above in an non-rotating frame, both are in inclined somewhat elliptical orbits with $a\approx \text{1 AU}$.

To go from LEO to escape from Earth orbit and start "walking" along a ~1 AU circle to approach the asteroids' longitudes, you need about 2.5 + 0.7 = 3.2 km/s of delta-v, according to the plot below.

I'm assuming you can "walk slowly" around 1 AU and creep up on the longitude of your target asteroid with little delta-v if you have a lot of time. There is some significant eccentricity, and that takes significantly ore delta-v to acheive, However these astroids have a hefty inclination, and that's a deal breaker!

At 1 AU and still in your circular orbit escaped from Earth, you are moving at about 29.7 km/s. Without a trick like a flyby over one of Earth's poles a few years later, there's no simple way to make an inclination change besides burning a lot of propellant to deflect that 51.5 km/s velocity vector by 15 to 20 degrees. The additional propulsive inclination maneuvers would require 6.8 to 9.7 km/s of delta-v. 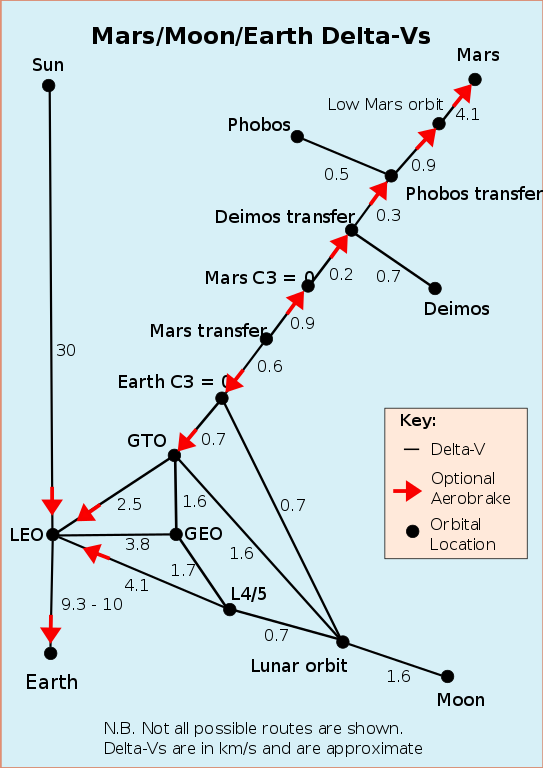 Not the answer you're looking for? Browse other questions tagged orbital-mechanics feasibility near-earth-asteroid or ask your own question.

2
Do horseshoe orbits have anything to do with Lagrange points? Do words fail us here?

7
How could transfers between SEL1&2 and EML Lagrange points be utilized?
2
What do the green lines represent in this Lagrange Point animation?
4
Question about the Hohmann Transfer: why does delta-v go down when transferring to a higher orbit?
6
Are large halo orbits around L₁'s and L₂'s preferred over small orbits for reasons other than geometry?
2
Burns for EML-1 to LLO
3
How well can the orbits of Jupiter Trojans to be visited by Lucy be predicted?
1
What is the “interesting story” on the limitations of NASA's current near Earth object survey network"?
10
Do all dangerous asteroids first pass through keyholes?
1
Why shouldn't we illustrate spacecraft trajectories on top of static pseudo-potential surfaces?