Identifying some sort of flare near Earth

Anyone know what this flare is in the top lefthand corner of the picture? 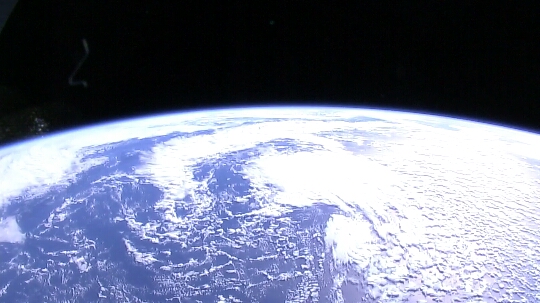 The ISS live feed uses the cameras of the HDEV experiment. This is a group of four cameras in a pressurized housing attached to the outside of the ISS. 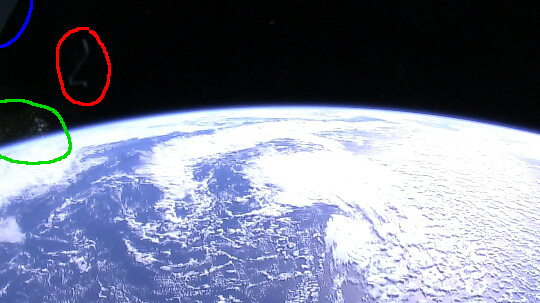 The picture is from the forward-facing camera. What you're seeing in the top-left corner of the image image are a dust filament on the housing (red circle), what appears to be sunlight reflecting off a surface defect of the housing (green), and the edge of the housing itself (blue). The visibility varies with sun angle and brightness; they're not visible as I write this, but could be clearly seen shortly after the ISS came out of Earth's shadow.

1
How is the atmosphere in the pressurized housing of ISS' HDEV cameras managed? Outgassing addressed?

36
Why does there appear to be a 180-degree stereo microphone array outside the ISS?
3
Which Apollo Command Module is pictured here?
1
Help reading this Mercury era NASA “ancient” iconography
2
What are these mysterious white star-like dots near MU69 Ultima Thule? Real objects near the asteroid, noise, cosmic rays, or something else?
9
What are these stacked panels on the ISS in this image?
3
Help identifying this archival NACA/NASA image of a wind tunnel test object
11
What is the utility of this peanut-shaped ground facility?
7
On the ISS what is that frame with a criss-cross of rubber bands?