Is the Standard Model of Atmosphere the same as NRLMSISE-00?

I keep reading about the standard atmosphere being a static model and related to the 1976 US standard model. The NRLMSISE seems like an atmospheric model, but I'm unsure if its an extension of the standard model with data for higher altitudes.

NRLMSISE is an empirical model using solar activity observations (mainly the F10.7 solar flux, i.e. the flux at a wavelength of 10.7cm, but also other observed variables).

The Nasa Standard atmosphere is a static model. It is dependent on time and location as well but not on actual observations of the solar activity, geomagnetic activity, etc. This means that NRLMSISE-00 will be more accurate in general (although still often wrong by about 25%).

Aside from this, NRLMSISE-00 also outputs the density of several components of the atmosphere, such as Helium, O2, N2, etc.

Finally, the Standard Atmosphere describes the whole atmosphere from the ground up, while NRLMSISE-00 is a thermospheric model and is therefore only suitable for altitudes above 80-90km.

So to conclude, NRLMSISE takes into account the actual observations, while the Nasa standard atmosphere model is static, making NRLMSISE more accurate. For space applications like orbit determination, NRLMSISE's higher accuracy makes it much more suitable.

If you want an even better model however, I suggest you take a look at the Jacchia-Bowman 2008 model. It performs similar to NRLMSISE during normal solar activity levels but is more accurate during geomagnetic storms and during low solar activity periods. See this Phd thesis for a comparison between atmospheric models (pg. 141).

The US Standard assumes the atmosphere is divided into discrete regions in which temperature lapse rate is constant, then calculates pressure and density based on hydrostatic equations and the ideal gas law. As described above, NRLMSISE-00 is empirical so it is based on measured data. It does apply from ground through to exobase though (see original publication here).

The data below shows the temperature and air density variations with geopotential altitude for both US Standard Atmosphere 1976 and NRLMSISE-00. It shows significant differences for altitudes below approximately 85 km. As recommended, you should use NRLMSISE-00 or JB2008 for higher altitudes, the latter being more accurate during geomagnetic storms.

We recently had a need for both NRLMSISE-00 and JB2008 models, so we developed a RESTful web API that wraps the original codes. The API is now open and available for anyone who needs it here and was used to generate the plots below. 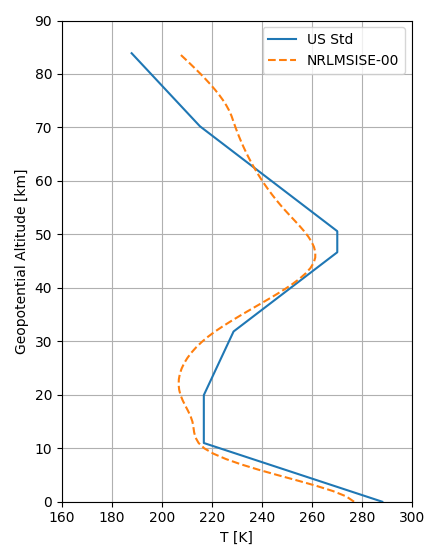 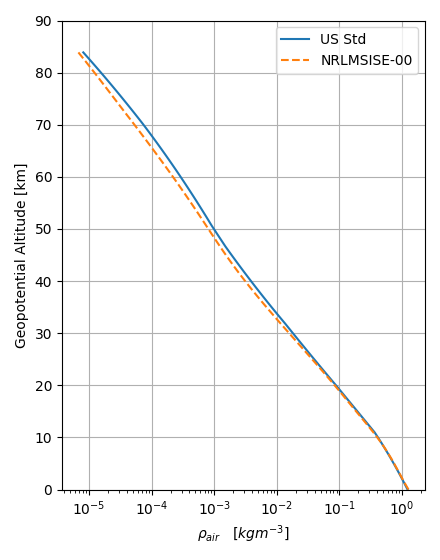 55
Why is the breathing atmosphere of the ISS a standard atmosphere (at 1 atm containing nitrogen)?
3
Heavy gas artificial atmosphere on Ceres?
6
Re-entry Dynamics
1
Atmosphere on the Moon
8
What are the characteristics of the Earth's atmosphere near the Karman line and why?
7
How does the sunlight affect the height of the atmosphere?
4
What is the atmospheric composition of Venus at the 34 mile (50 km) altitude of the proposed HAVOC program?