After watching the IMAX Apollo 11 film today I wondered if there was any film footage from outside of an Apollo Command Module (CM) re-entry (or even color stills). It does not have to be from 11.

The problem was probably the splashdown point being in the Pacific.

I've seen some black-and-white stills of Apollo 13 re-entry, and re-entry film footage shot from inside some of the CMs (some of this was in the film) but not externally taken footage or color pictures. I suspect that the people that assembled this film would have used it if it existed.

There are at least stills from Apollo 8: 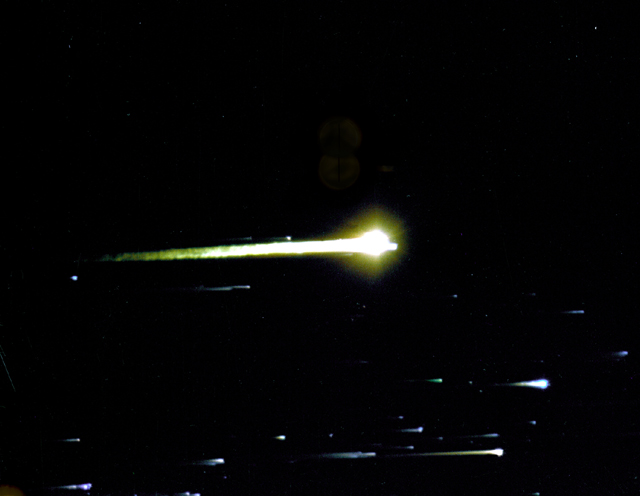 In this historic photo from the U.S. space agency, a reentry photograph of Apollo 8 which was taken by a U.S. Air Force ALOTS (Airborne Lightweight Optical Tracking System) camera mounted on a KC-135A aircraft flown at 40,000 ft altitude. Apollo 8 splashed down at 10:15 a.m., Dec. 27, 1968, in the central Pacific approximately 1,000 miles South-Southwest of Hawaii.

The reentry phase was nicely visible, but a long way away from the splashdown point. 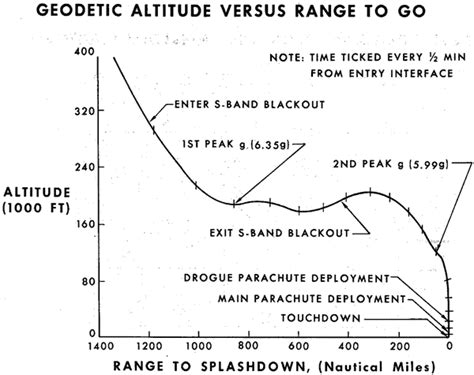 Assuming the end of blackout is also the point where the capsule no longer leaves a bright trail, that's 400 miles out from the splashdown point (where most of the cameras would be).

So they used long-range land-based aircraft to observe this (KC-135 is more or less a Boeing 707).

ALOTS is a high-speed film camera capable of 10-80 frames/s. This source calls ALOTS a 'still film' camera though. And the way this is worded, I don't think there was an attempt to capture the reentry in motion picture (for Apollo 11).

For Apollo 8 they captured 4 images: 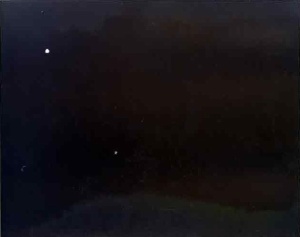 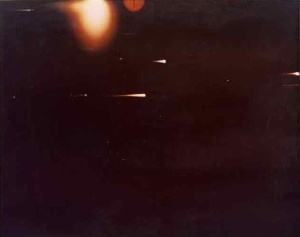 the brightest streak at the top is probably the SM breaking up: 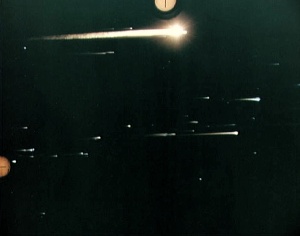 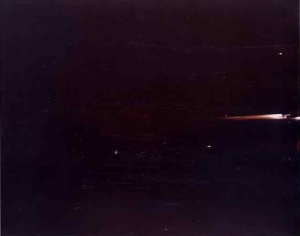 That site lists some other ARIA missions in support of Apollo returns, but those seem to have been radio relay missions only.

Several Apollo reentries were seen by crew and passengers on airliners, and photos were taken. This is one of Apollo 13: 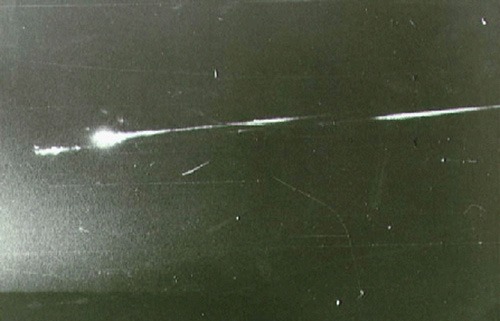 Not the answer you're looking for? Browse other questions tagged apollo-program history photography or ask your own question.

6
Re-entry Dynamics
5
Why does the Apollo reentry trajectory show a few climbs?

10
What was mylar used for on the Apollo Command Module space craft? Why is it gold after returning from space?
10
How accurate is this Apollo Command Module replica, and why would it be copper-colored?
24
How exactly did the floor of an Apollo LM look like after EVA(s)? Seeking photo!
5
How did the Apollo Service Module reenter?
11
Was splashing down on the USSR-controlled territory a possibility for Apollo missions?
26
How did sloshing prevent the Apollo Service Module from moving safely away from the Command Module and how was this fixed?
4
What did the Apollo 12 multispectral Four-Camera system look like?
19
Were any Apollo-13-specific procedures added to standard training?
4
Where did the floatation collar and sea anchor attach to the command module?
2
Did the Apollo Command module really “skip” within, or off of the atmosphere as a part of it's reentry program?