How far will the debris cloud from Hayabusa-2's touch-and-go sample recovery travel around Ryugu? Will any have escaped to heliocentric orbit?

This animation, extracted from a longer video, shows the moment of Hayabusa2's 21 February 2019 touchdown on asteroid Ryugu. JAXA

The video below and GIF above show jAXA's Hayabusa-2 touch-and-go landing and sample collection from the asteroid Ryugu.

Will all the debris settle back down to the surface quickly, or could some be transported far away or to the other side of the asteroid?

How likely is it that some could have reached escape velocity relative to Ryugu?

The impactor probably had quite a large velocity and the recoil objects will be much slower. Is there anything known about the velocity of the debris? Can it be estimated from the video and then compared to the escape velocity from Ryugu's mass and size? 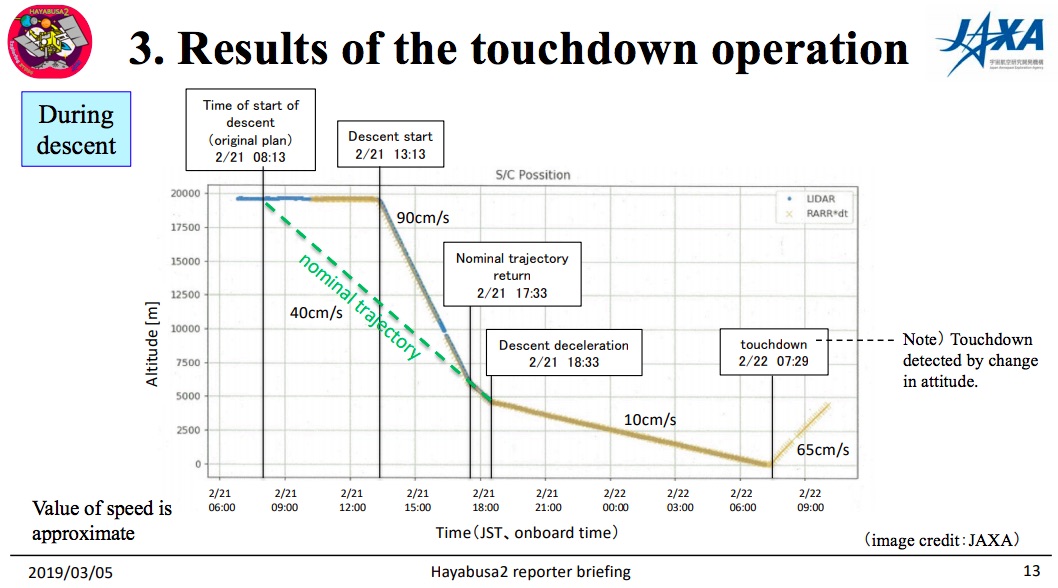 A frame-by-frame review of the footage annotated below shows us a small rock (circled in red) moving across the view a short time after the touchdown. The distance to its shadow (circled in green) appears to remain roughly constant, implying it moves roughly parallel to the ground.

Using the shadows of the craft's solar arrays (edges marked in blue) and the size of the individual panels ~1.4m, we can approximate the distance travelled by the rock's shadow over the surface (green line). This approximation was made with the very rigorous method of a ruler-on-monitor.

The shadow moves ~2.1m over the course of 12 frames between the images. During this portion of the footage, the frame rate was 2fps, giving the time taken as 6 seconds and a velocity of ~0.35$ms^{-1}$

Hayabusa2's landing site L08-E1 is very close to the equator, giving it an elevation of around +70m above Ryugu's mean radius of ~450m. This page has some great detail on the selection process for the landing site.

Thus we can calculate an escape velocity at the landing site:

So surprisingly enough, this example actually has approximately escape velocity!

Various studies (eg Hartmann 1985, Tsujido 2015 - both paywalled) find that for high-velocity impacts ~5% of the ejected mass can be expected to be moving at ~10% of the impactor velocity. In Hayabusa2's case, the impactor has a velocity of 2km/s, implying some of the ejected material may leave at ~200m/s - well in excess of escape velocity.

I also suspect much of the movement of debris is caused by the craft's propulsion rather than the impactor - 4 bi-propellant thrusters with an exhaust velocity of ~2800m/s.

So it can be said with some confidence that much of the debris will escape Ryugu and enter heliocentric orbit.

At the time of landing, the Sun was overhead. I would guess that the distribution of velocities would be fairly uniform around the hemisphere directed away from the surface, so the final orbits of the particles would reflect such. 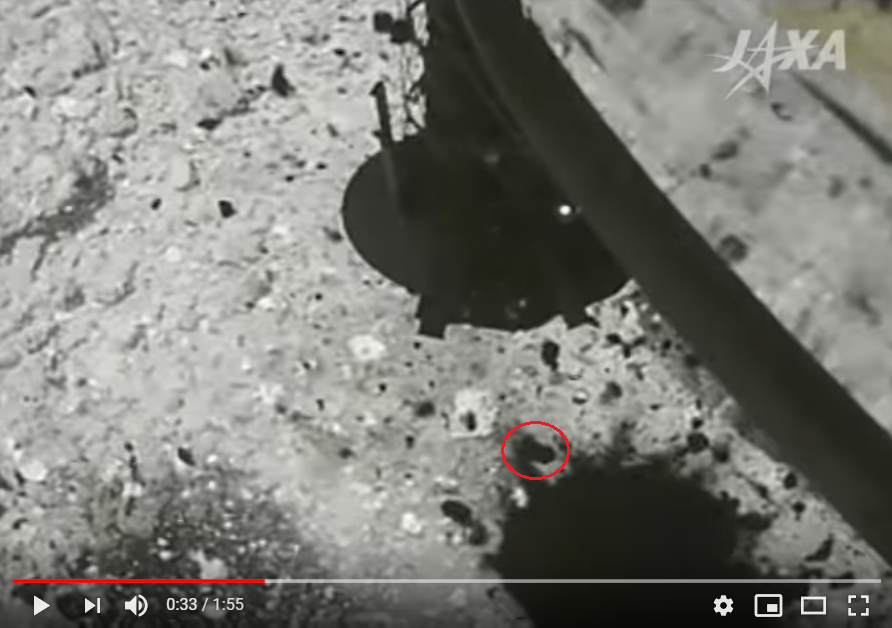 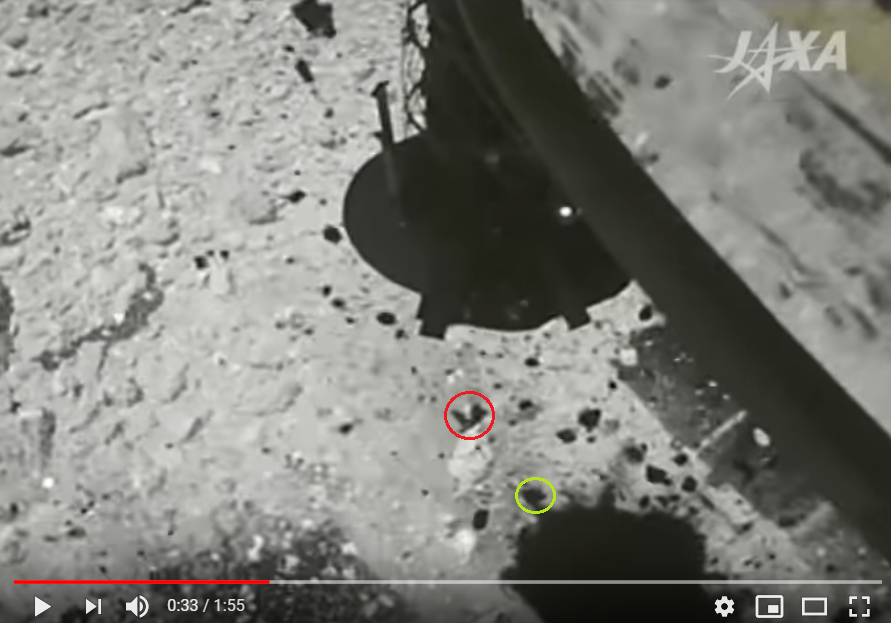 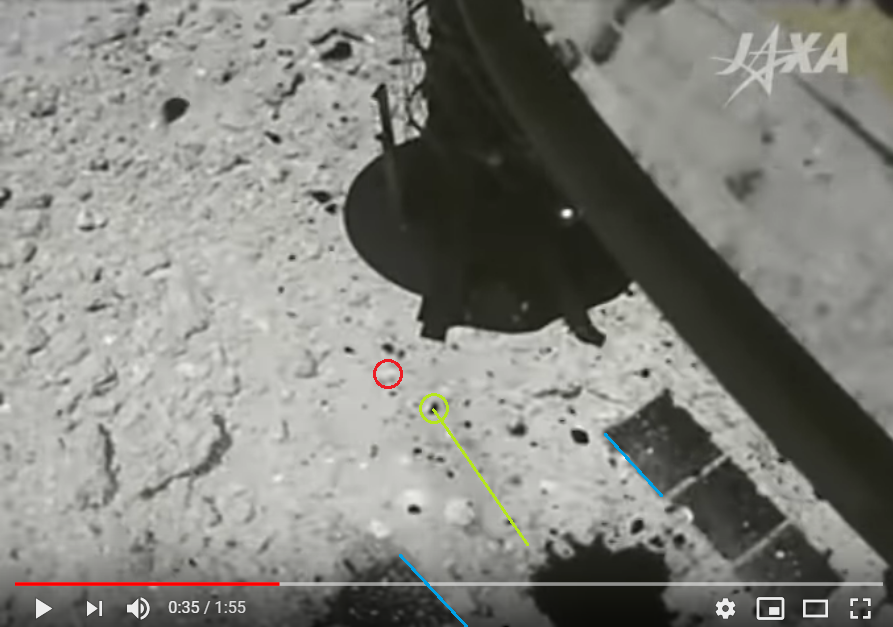 All images from JAXA

5
How far did Hayabusa-2 back off before the "bomb" went off?
4
Realistic cost and feasibility of sun-shading?

15
Will Rosetta have to adjust its orbit around Chury due to the comet's coma and tails?
3
How could JAXA not know when Hayabusa2 will arrive at asteroid Ryugu?
2
What criteria was used to select potential landing sites for Hayabusa-2's rovers on Ryugu?
6
Nature of Hayabusa-2's "Home Position" relative to Ryugu? Is it Ruygu's L1?
5
How far did Hayabusa-2 back off before the "bomb" went off?
4
From interplanetary space to the Australian Outback, how will Hayabusa2's return capsule be tracked? Desert Fireball Network perhaps?
4
How to calculate an initial impulse for escape from planet's sphere of influence and lay on a specific orbit around the Sun?