Why does this boat have a landing pad? (SpaceX's GO Searcher) Any plans for propulsive capsule landings?

The BBC News article SpaceX Dragon demo capsule set to return to Earth talks about the return of the first Crew Dragon capsule to Earth:

Four parachutes should bring it into soft contact with water about 450km from Cape Canaveral, Florida.

Splashdown is expected at about 08:45 EST (13:45 GMT). A boat, called GO Searcher, will be waiting to recover the capsule.

Question: Splashdown sounds like it lands in the water, but the "boat" has a big SpaceX landing pad on top. Why? And why does it say "17" in three orientations? 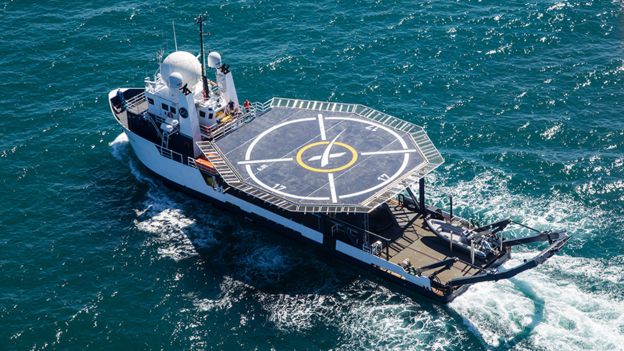 The GO Searcher vessel is tasked with picking Dragon crew capsules out of the water. NASA

Are there any plans for this to be used for propulsively-guided capsule landings in the future?

The pad is for a helicopter:

Most notably, GO Searcher is being fitted with a helipad that will be used to rapidly transfer astronauts from Crew Dragon to Cape Canaveral, where they will go through a number of medical evaluations and debriefings after a six-month stay in orbit aboard the International Space Station (ISS).

For Cargo Dragon flights, NASA has a requirement to late load certain experiments, and upon landing, quickly retrieve them. As you can imagine some experiments are very time sensitive to get the best results.

The landing zones are not usually all that close to shore, so by ship it can take many hours to days to bring the capsule back and get into it.

The helicopter pad shown allows for flying the samples back. In this case the samples happen to be people who landed in the Crew Dragon.

Any plans for propulsive capsule landings?

The answer is that there may have been unspoken plans, but after the situation discussed in SpaceX and propulsive landing on Mars — what just happened? (and why?) they may not be voicing them to loudly.

SpaceX CEO Elon Musk says that Crew Dragon – originally designed to propulsively land like Falcon 9 – is still technically able to do so, a capability that could give the already uniquely redundant spacecraft yet another level of safety during Earth reentry and landing.

While Musk noted that adding or enabling that capability during missions with astronauts would be entirely dependent upon NASA’s approval, the idea would be to trigger Crew Dragon’s SuperDraco abort thrusters in the event of a partial or total failure of the spacecraft’s parachutes. Although Crew Dragon is already capable of keeping its passengers safe if one of its four parachutes fails to properly deploy, the loss of any additional drag would likely create a situation where the force of impact on the ocean surface could severely injure or kill astronauts, much like a car crash without airbags. To prevent this, Crew Dragon could fire its thrusters at the last second, canceling out or at least minimizing the force of impact.

The Teslarati article goes on to say:

If it can be done, Crew Dragon would be the only spacecraft in the world with the ability to ensure crew survival in the event of a failure involving parachute deployment, although it’s not clear if that recovery redundancy would still be available after an actual in-flight or pad abort during launch operations. Still, for a space agency so apparently fixated on and worried about ‘qualifying’ SpaceX’s Crew Dragon parachutes and a “Safety first!” culture more generally, one would expect NASA to jump on any opportunity to dramatically improve spacecraft safety with minimal additional effort.

Just fyi, the Soyuz capsule does use a propulsive burst to lower velocity just before impact, as does Blue Origin's New Shepard crew capsule:

Not the answer you're looking for? Browse other questions tagged spacex landing recovery or ask your own question.

34
SpaceX and propulsive landing on Mars — what just happened? (and why?)
6
How does New Shepard Crew Capsule sense proximity to trigger retropropulsion just before impact?

22
Why does SpaceX have a launch window for a pad abort test?
10
Why does SpaceX's Launch Complex 1 have four contingency landing pads?
22
Does SpaceX have any significant additional legal hurdles for flying private citizens around the moon?
4
Reuse statistics of SpaceX Dragon capsules?
18
Why will Superheavy/Starship have a landing pad so close to the launch pad?
14
Have other space capsule splashdowns attracted a crowd of civilians on boats?