Also, were the engines "allowed" to shut down as a result of running out of propellant? Or were they issued a shut down command with some propellant left?

(This is all for shuttle, not SLS)

Running the engine out of propellant was a Big Bad Thing. There were sensors in the External Tank (for hydrogen) and in the orbiter feedlines (for oxygen) that would trigger a shutdown if the sensor registered dry. The placement of the sensors was such that the engine should shut down before they ran out of prop.

Normally the engines shut down on commands issued by guidance and the system had a small amount of prop remaining. (note: carrying extra prop to orbit wastes payload capacity, carrying too little means you don't go to space)

Here's some simple linear data for shutdowns from different power levels. This is for the (rather old) FPL version of the SSME (see the taxonomy of the SSME in my answer to Which STS mission raised the normal engine throttle above 100%, and what change to the SSME made that possible?) but should be somewhat representative. It's based on data supplied for use in simulator models at Johnson Space Center. This is chamber pressure data but thrust should be roughly proportionate. Y axis in psi, X axis in seconds. 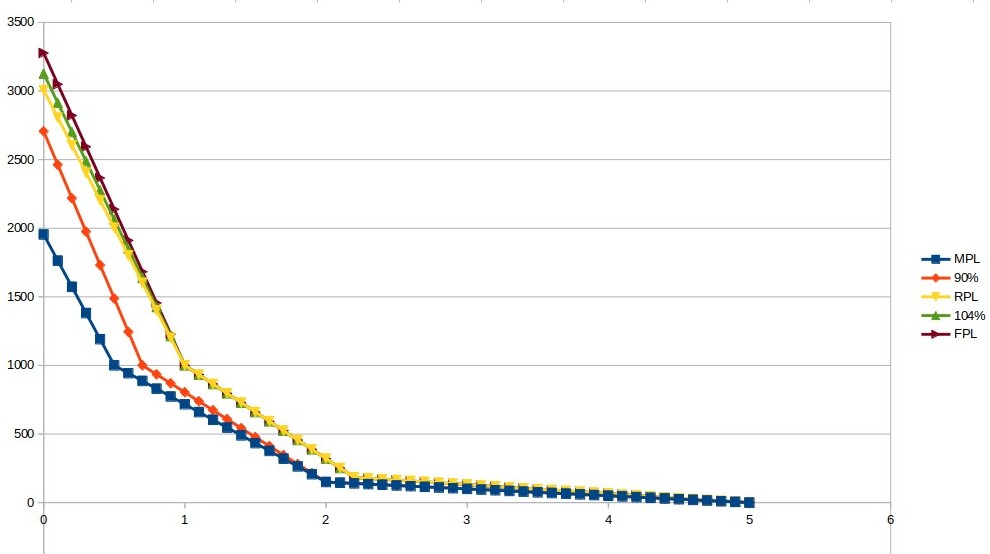 were the engines "allowed" to shut down as a result of running out of propellant? Or were they issued a shut down command with some propellant left?

Shutdown was commanded when the appropriate trajectory was reached.

Even in multistage rockets, rocket engines are not run to complete depletion of propellant. The fuel/oxidizer mix ratio must be closely controlled to avoid damage to the engine; if the fuel ran out early the mixture ratio would go ox-rich, increasing combustion chamber temperature. The "trickling" flow of the last little bit of propellant would also produce rough combustion, which could be damaging. As Tristan notes, the turbopump would also be catastrophically damaged if propellant flow trickled.

Not the answer you're looking for? Browse other questions tagged nasa sls ssme or ask your own question.

7
Which STS mission raised the normal engine throttle above 100%, and what change to the SSME made that possible?
5
NASA's RS-25 Engines

5
Theoretical Max G forces on Shuttle Launch?
18
Was LC39A built with a rocket much larger than the Saturn V in mind?
1
How does the Space Shuttle's SSME engine's thrust vary after ignition?
4
Did InSight take a “mean left” turn on its way to Mars? Is it an out-of-plane maneuver?
13
Did NASA tell the Skylab astronauts to “Stop running around!”?
5
NASA's RS-25 Engines
5
Would the Space Shuttle External Tank have made orbit as a VT SSTO with 6 SSMEs?
1
What is the “interesting story” on the limitations of NASA's current near Earth object survey network"?