How do Inmarsat 5 F4's beams correspond to all of these antennas and feeds?

note: This is an old-style @uhoh question meaning that it is a bit on the long side. In this case I think it really needs to be since the question is a bit complex; I'm trying to understand how all these components interact.

I've included many images in order to save the time of readers each doing their own image search.

The four Inmarsat-5 satellites are essentially carbon copies, using the same satellite platform and featuring identical payloads. Based on Boeing’s BSS-702HP satellite platform, each weighs in at around 6,100 Kilograms and hosts 89 Ka-Band transponders, supporting high user download speeds of 50Mbps and uplink of 5Mbps.

I think I can get to approximately 89 Ka-Band transponders by adding up all of the feed horns arranged as focal plane arrays for the three side-mounted dish reflectors. And when I look at illustrations of the fully deployed satellite and estimate the geometry, the width divided by distance to dish is a similar ratio to the diameter of the earth divided by the GEO distance. Here's my arithmetic: 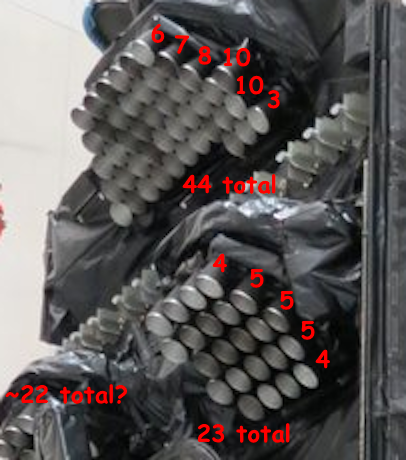 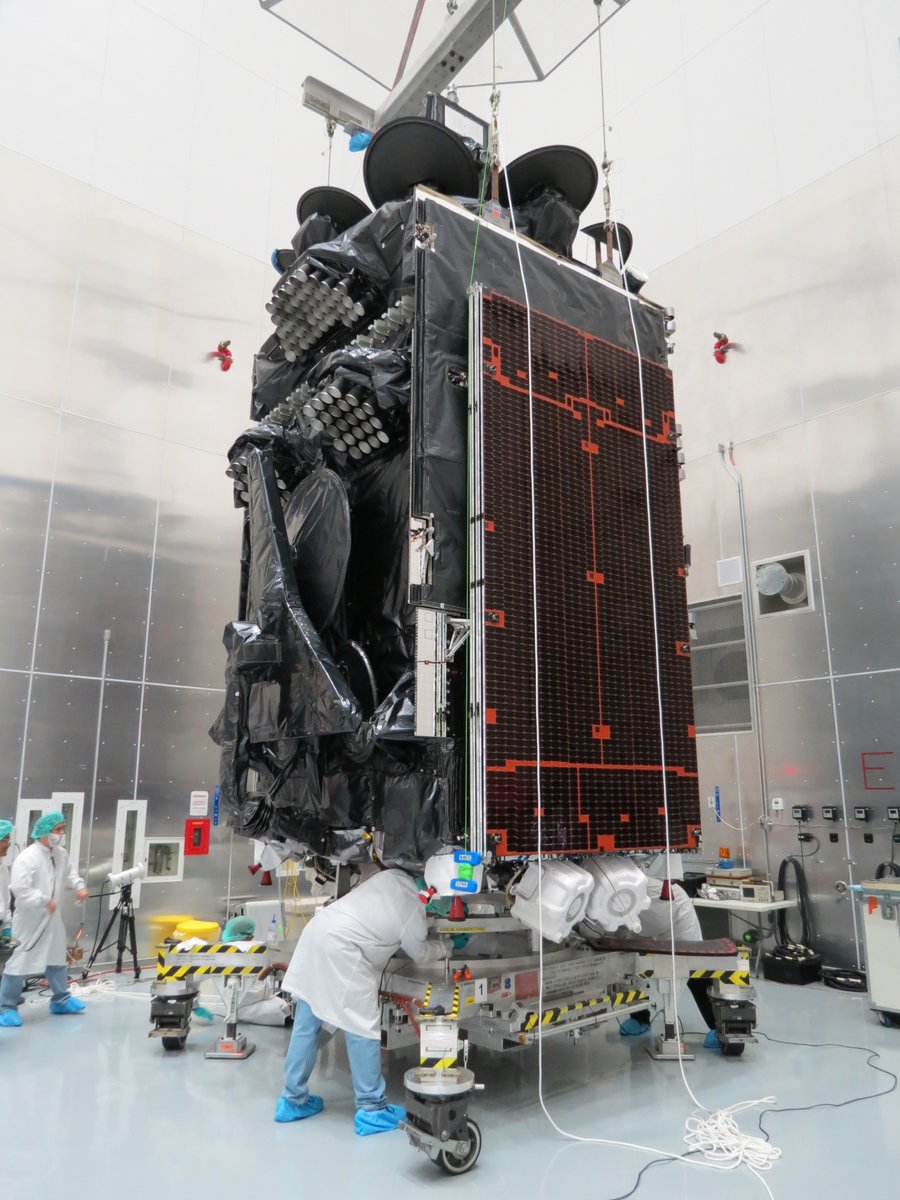 above x2: Photo: Inmarsat from Spaceflight 101. 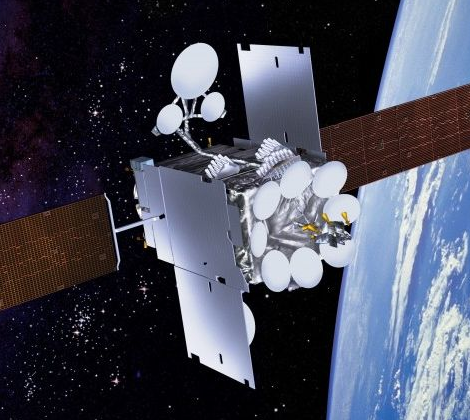 The problem with my arithmetic is that there is a little bit of a dish peeking out at the bottom, and I don't know what to do with it. If you look at the next image, it seems to suggest a second set of 3 dishes, with perhaps dozens of more transponders: 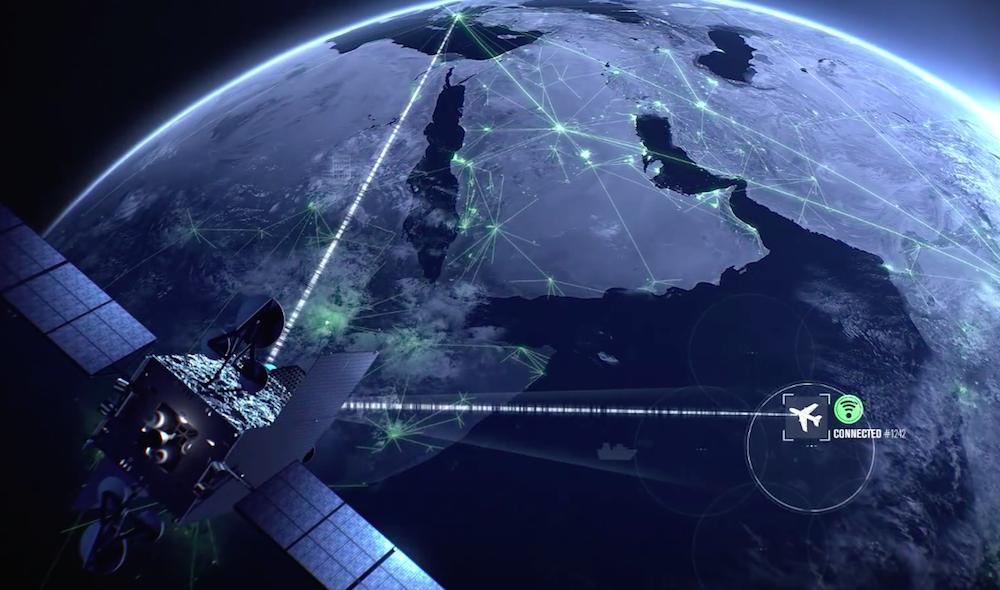 above: Artist’s concept of a Global Xpress satellite. Credit: Inmarsat. From Spaceflight Now.

Also, the article goes on to say:

Inmarsat 5-F4 hosts two transmit and two receive apertures, and six steerable spot beams deliver a high-degree of flexibility to respond to changing demands and direct additional capacity where it is needed. The high-capacity spot beams are fed by twelve 130-Watt traveling-wave tube amplifiers while the regular communication beams use bent-pipe repeaters and 60:48 TWTAs.

Question 1: I thought I could get 89 transponders by counting the feed horns on one side, but there are suggestions that there is a symmetric array on the other side. Is one uplink and the other downlink? If not, how does the arithmetic work?

Question 2: I don't see any evidence of phased arrays (though that doesn't mean they aren't there) so I'm wondering how the six steerable spot beams are generated!

Is this done the good ole' fashioned way? Is it done using articulated, movable feed horns, or perhaps tilting dishes? 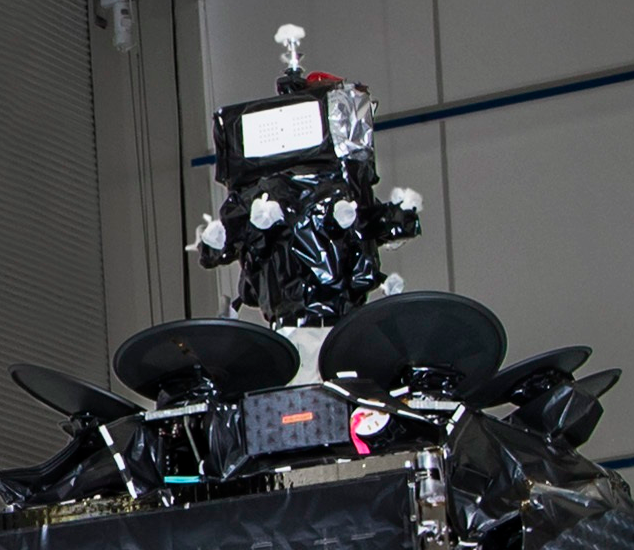 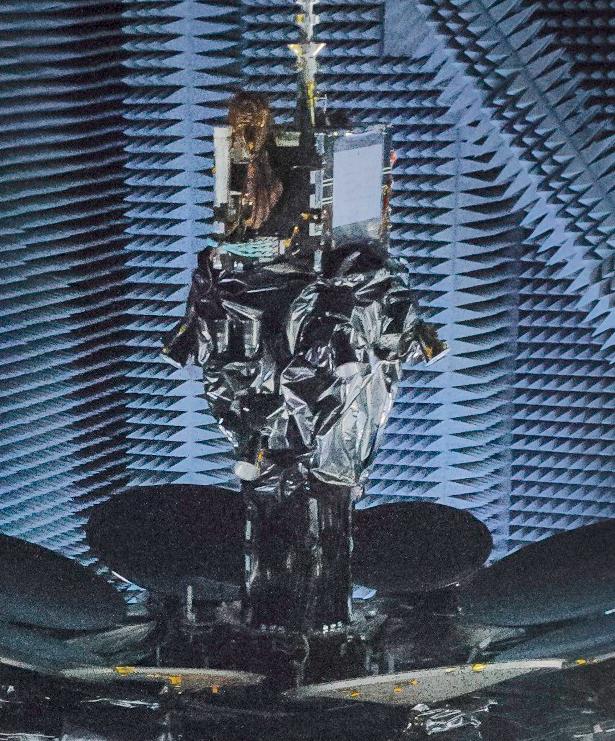 above x2: cropped from Spaceflight 101 Boeing images below: 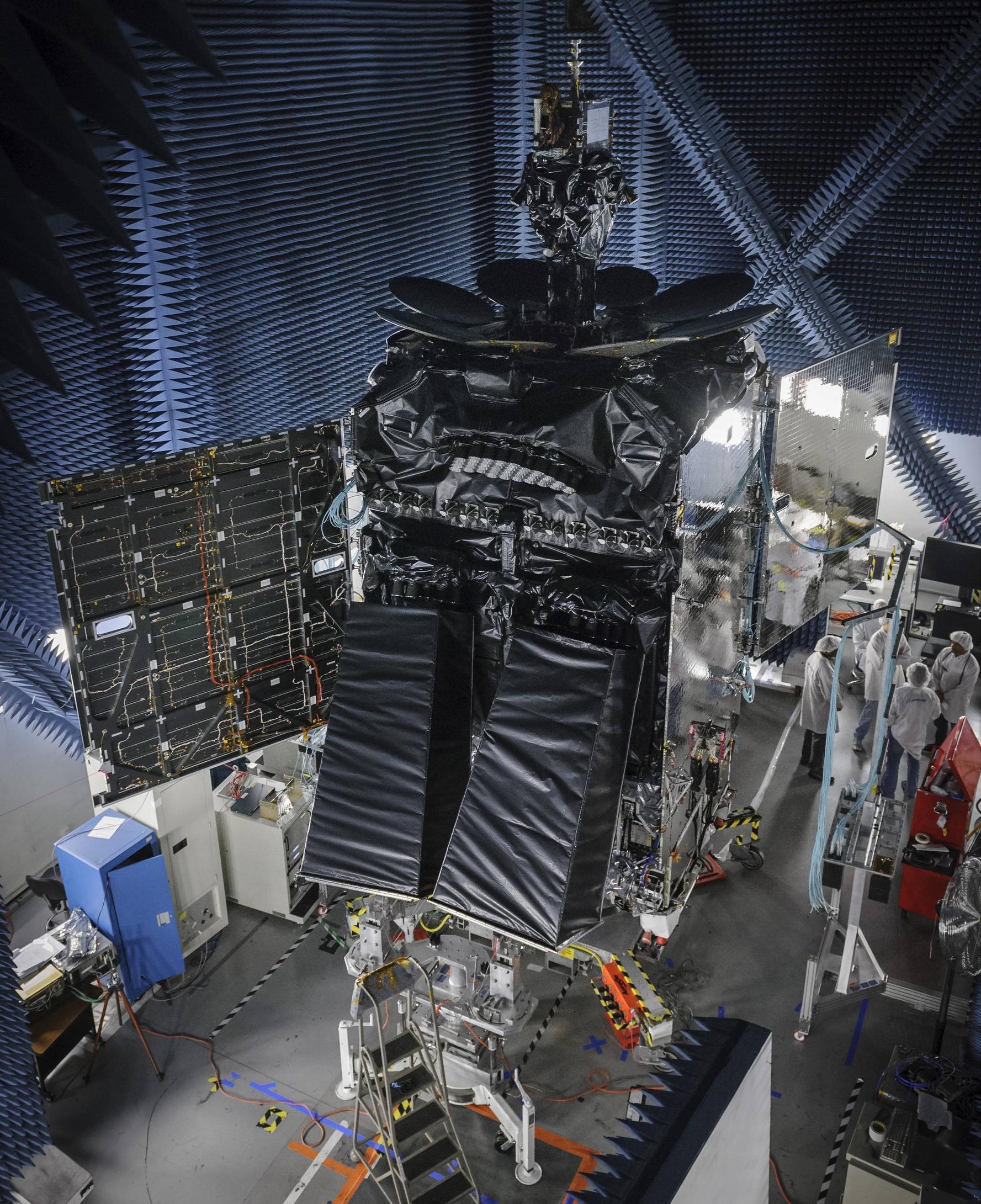 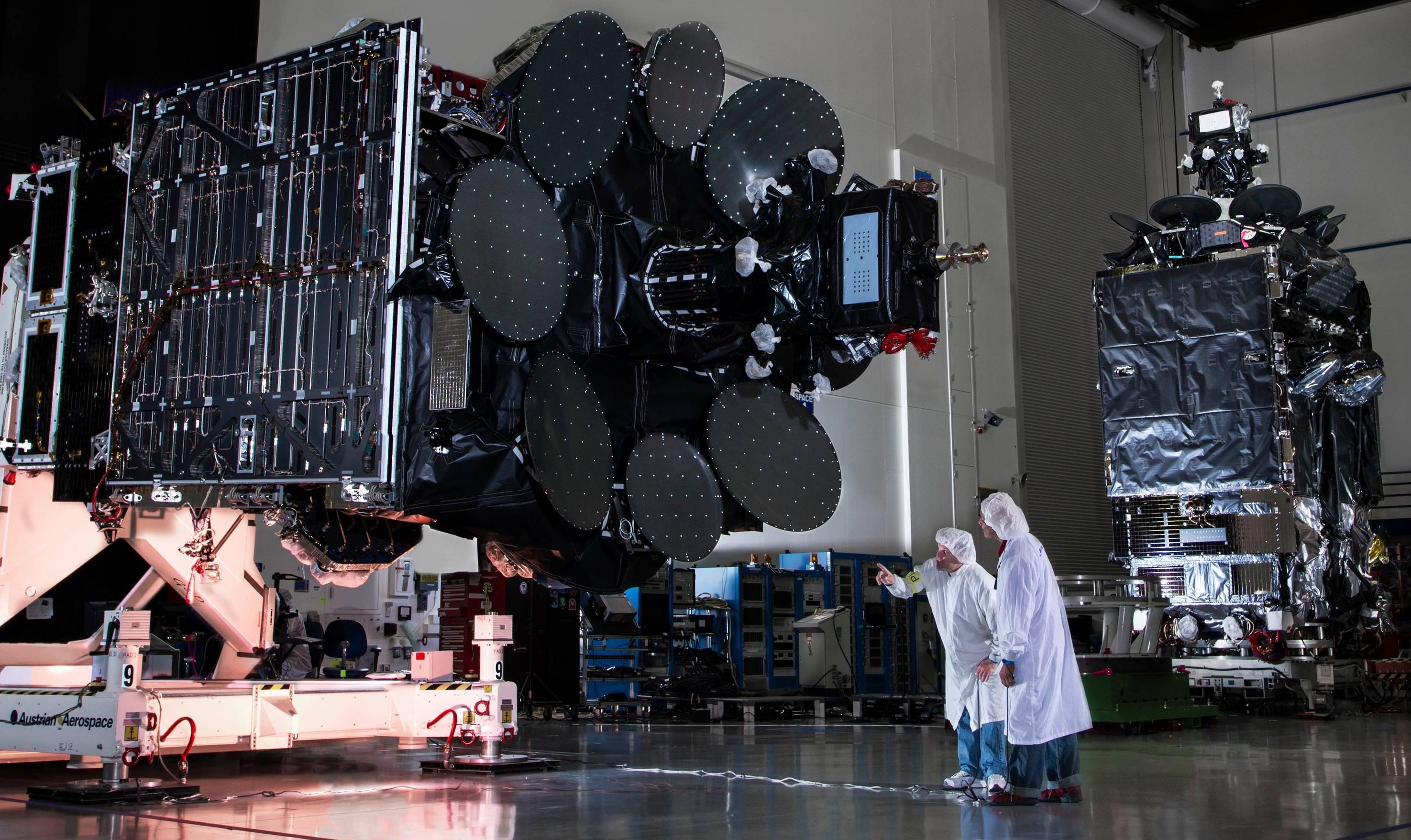 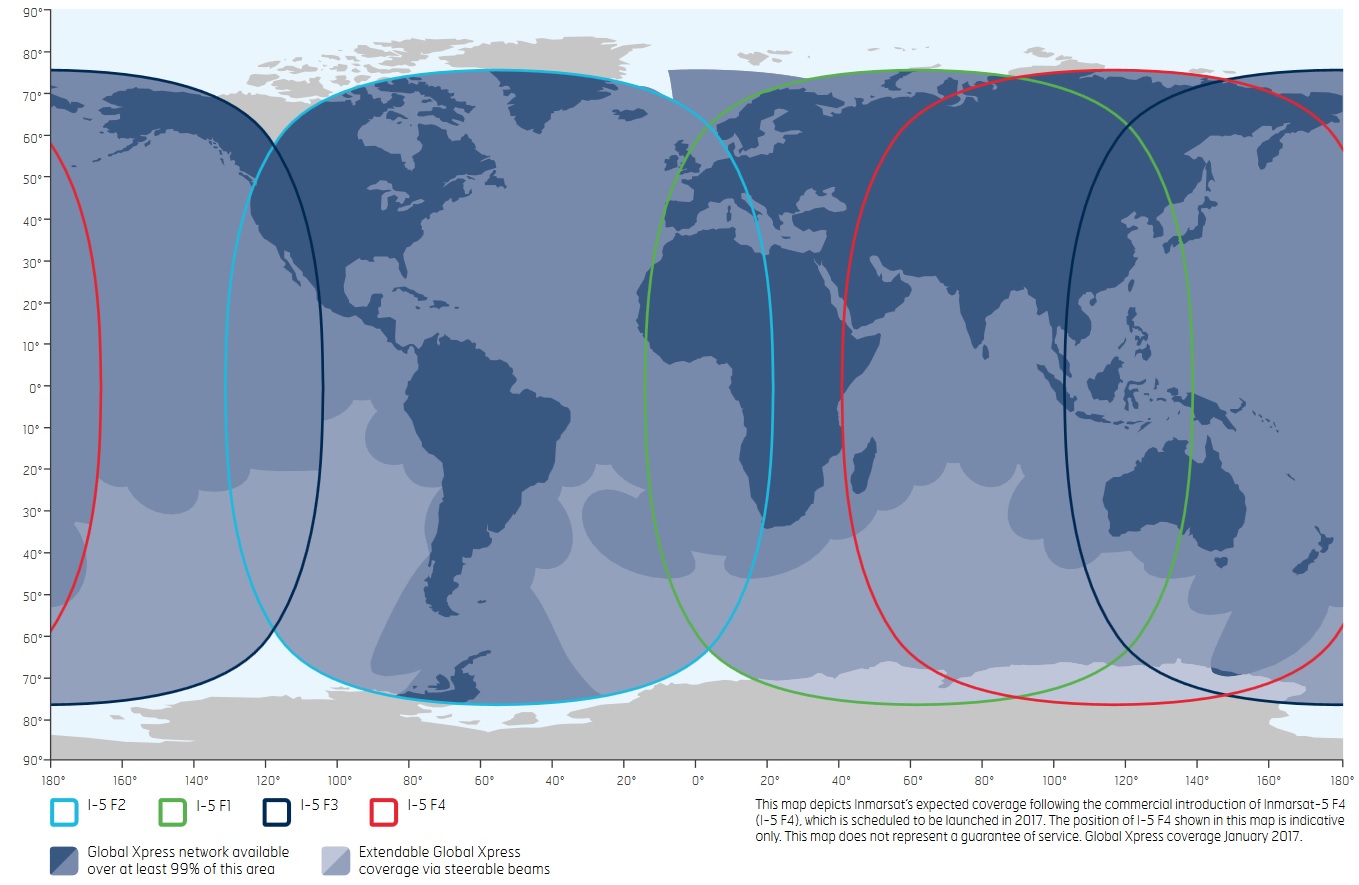 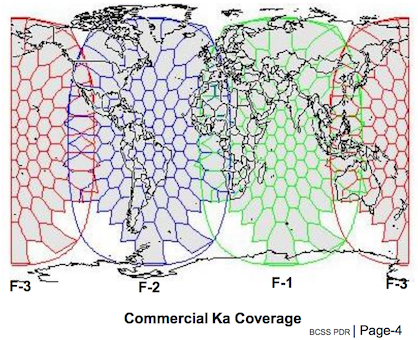 The answer may not be as clear cut as you are hoping, firstly because of terminology and then because of the architecture possibilities on a communications payload.

Feed = feed horn, as you've correctly identified in the first photo with numbers

Beam = a coherent rf field. You've correctly identified that it could come from a phased array or otherwise and so you already understand a beam doesn't have to associate 1 to 1 with a feed, though it could do.

Antenna = usually the overall assembly of a reflector and feeds, or just feeds if it is a direct radiating antenna. Again an antenna could have several beams and several feeds.

Transponder = not well defined but can be taken to mean a whole chain of equipment from receive to transmit or just a high power amplifier within that chain.

The following diagram from Satsig is helpful as a generic payload: 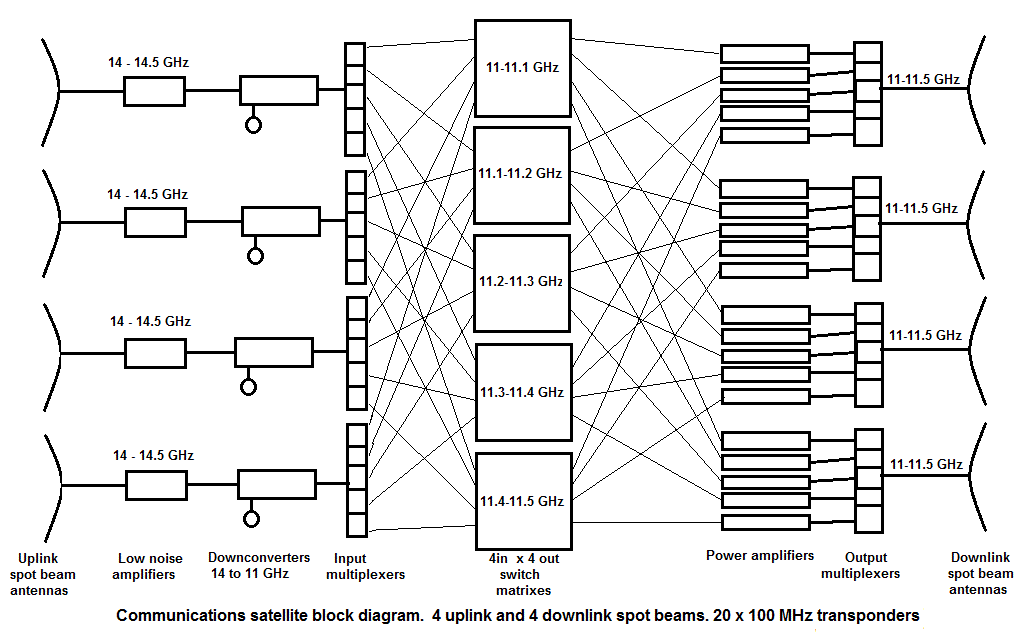 Its probably nothing like the Inmarsat 5 case but that's not the point. The important bit is that you can see that there are:

In this case we can see that each of the high power amplifiers has some mapping to selection of receive antennas and just one transmit antenna. Each high power amplifier has also been allocated to a frequency sub-band within the Ku range. Each of the antennas is broadband. Lastly we can't see how many feeds there are per antenna reflector.

Firstly the number of power amplifiers <> number of antennas, though as noted we can't see the feed horn detail.

If we take the usage that a transponder relates to a high power amplifier then we can see that the numbers of transponders appears to relate to the number of sub frequency bands aggregated over each antenna. It doesn't have to be that simple though, that's just an artifact of the example diagram.

Finally, to the questions

I can see the 8 reflectors on the top floor, three on one East or West face and perhaps another 1+ on the other.

Q1 This link to Inmarsat's website here just gives 89 User beams, it doesn't mention anything about 89 transponders. That said, your arithmetic for the feed horn count looks credible as matching the Inmarsat figure. You are right that there could be another 89 feeds on the other East/West face, it could equally be that: A) a user beam is one way only, B) a user beam is two way through each of the 89 feeds C) the two way user beams have separately formed transit and receive paths on opposite E/W faces. I think we just have to accept that we don't know on this aspect (if it helps: I often have to look through payload block diagrams trying to work out what is connected to what; nothing beats being given better information up front!)

Q2 You're right that there could be a phased array, I'd normally suggest the mass of feed horns but because your count of the feed horns seems to match the 89 I'd be most inclined to associate the steerable spotbeams with the top floor reflectors instead. Clearly there are 8 rather than 6, and so other than assuming that just 6 have a gimbal I think we once again have to accept we don't know until some better information comes along.

As an aside I normally see Spaceflight101.com as a good source though for the moment we have to accept that we don't understand where the 89 "transponders" comes in for the moment. I accept that it could be that their terminology limits the use of the term transponder to something other than the 60:48 TWTAs.

Two other little thoughts that might turn the picture upside down:

9
What do large, modern communications satellites look like inside (roughly at least)?
4
Why do GEO satellites need different types of antenna?
1
Why are minimum three artificial satellites required for radio-communication all around the Earth?
0
Does transmitting from a few dishes significantly improve the performance of radar surveillance from Earth at GEO and beyond? If so, how exactly?

8
How do commercial broadcast satellites in GEO produce such carefully shaped signal footprints?
8
What are these very large, square panels on Inmarsat 5?
9
Do satellite uplink/downlink signals spread or leak into space?
5
The appearance of TESS' dish seems to be evolving, what will be the final configuration?
2
How does this fast-slewing SpaceX rocket-tracking dish track a moving spacecraft?
2
Did New Horizons use its smaller medium-gain antenna for most/all downlinking of Pluto and Arrokoth flyby data?
7
Why do these satellite antennas look so weird? (strangely shaped with little white dots...)
18
How do these cubesats' whip antennas work?
4
How were the 100+ antennas around Telstar 1 and 2 configured?
1
How does Quantum change it's antenna's shape? (Flagship UK telecommunications satellite just launched)