Could a cubesat propel itself to Mars?

I wrote the answer below to the question Could a cubesat be propelled to the moon? before realizing that it said Moon and I'd written it for Mars, so I've cloned that question and moved the answer here.

Is it possible with current technologies to propel a cubesat, which is launched from Earth, to the Moon Mars?

I am assuming you mean by propulsion by the CubeSat itself.

Not at the moment! Mostly because of the throughput (thruster lifetime) constraint on small Electric Propulsion (EP) thrusters designed for CubeSats.

Right now the leading CubeSat EP thruster is the BIT-3 (this is the thruster that will be used to go to the moon on my answer to your original question).

Here are the relevant specs:

Assuming a 20 Kg 6U CubeSat, here is a non-optimal low thrust trajectory simulation. 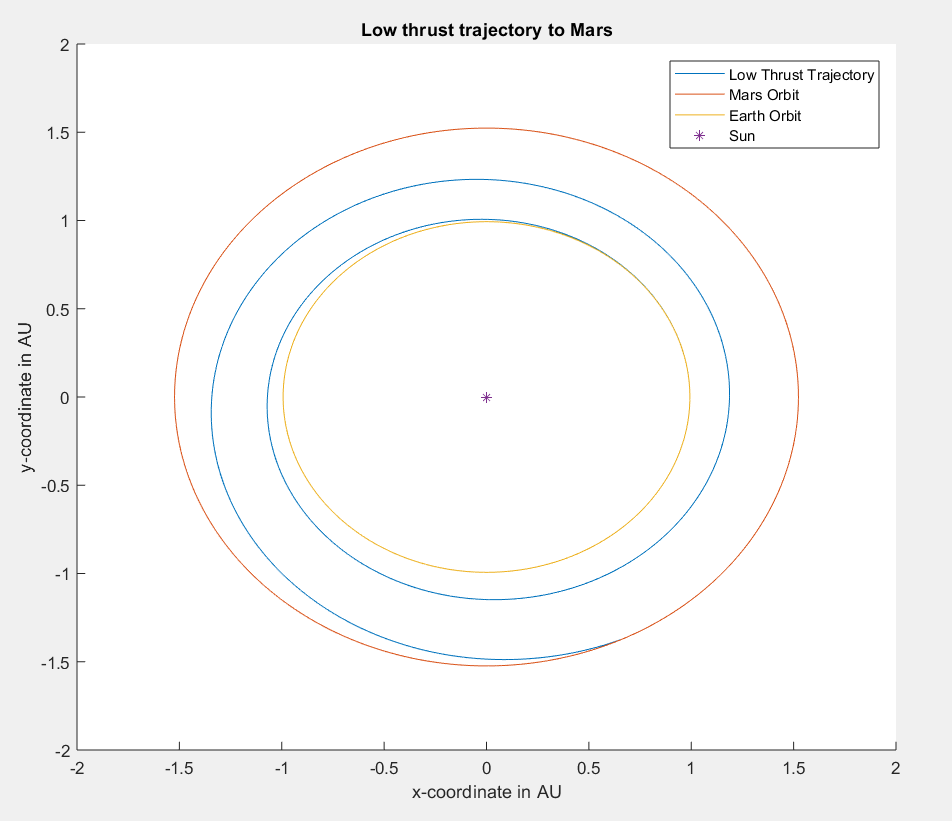 This takes 2.36 Years of thrusting time which is higher than the thruster life of 2.28 years. However, we are very close to this being possible. This simulation doesn't account for inserting into a Martian orbit or inserting into an earth escape orbit from a launch orbit. Both of those would further violate the throughput constraint.

As a last word, many people wrongly assume this would use a lot of propellant. This is false. The above simulation only uses 3.04 Kg of propellant out of a total mass of 20 Kg which is actually small when you think about it. Propellant is not the problem when it comes to EP.

Our cubesat will have nearly enough electric power for two engines at 1 AU, since we've expanded the form factor by 4 U and mass budget by 8 kg, let's assume we've found a way to double the size of the solar array to power our new engines. We have now 140 W at 1 AU and ~60 W at 1.5 AU near Mars.

Let's assume our cubesat starts in circular LEO at 400 km with an orbital velocity given by the vis-viva equation:

To achieve Earth escape velocity, and put it in a heliocentric orbit, @MarkAdler's answer tells us that the delta-v necessary for a slow low-thrust spiral outward to escape at very low velocity relative to Earth is equal to the orbital velocity at the start.

Delta-v from LEO to heliocentric is about 7700 m/s via low-thrust spiral.

Going from 1AU to 1.5 AU we can re-apply the same answer, which also tells us that the delta-v necessary to transfer between two circular orbits is simply the difference in their velocities.

Our two off-the-shelf engines with 250 g propellant tanks each can provide a total impulse of as much as 10,000 Newton seconds. With an average mass of about 20 kg, that only provides a delta-v of 500 m/s, and we're looking for over ten times that even if we've already gotten to heliocentric at 1 AU. That's based on 500 grams of propellant.

A back-of-the-envelope calculation starting with a MarCo-like cubesat with demonstrated capability of going from Earth to Mars, augmented from 6U 14 kg to 10U 22 kg with two existing engine designs and another 5 kg of propellant, we can get from a heliocentric orbit at 1 AU to one at 1.5 AU using solar-electric propulsion.

It's a long, slow spiral, many decades or probably a century. You would need even more propellant to do it faster using solar-electric, but even 50% more would cut your transit time to a decade or so based on some simple calculations I did here.

You'll also need an external booster to give you the delta-v from LEO to Earth escape velocity to a heliocentric orbit first. 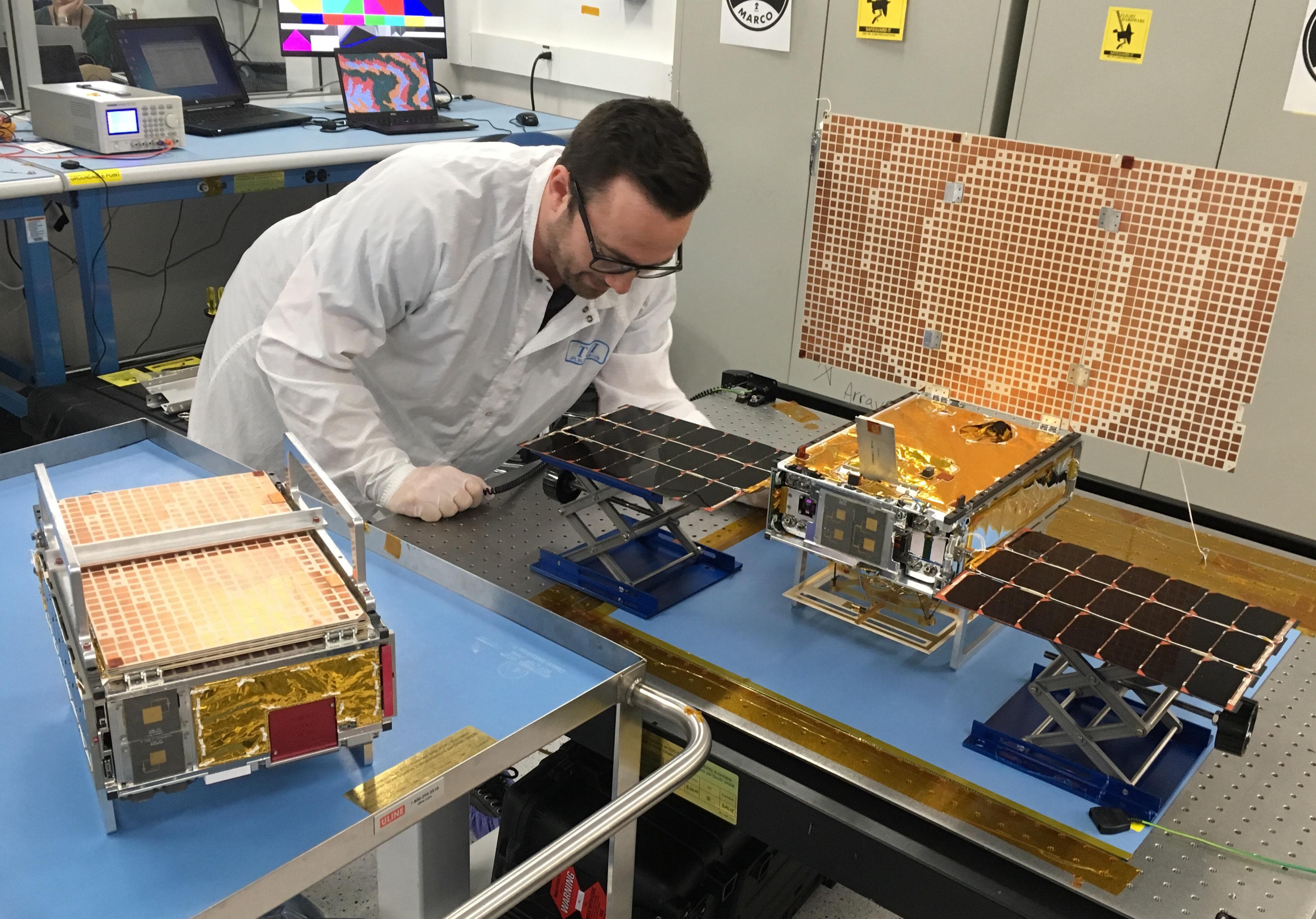 Not the answer you're looking for? Browse other questions tagged mars propulsion cubesat ion-thruster low-thrust or ask your own question.

10
General guidelines for modeling a low thrust ion spiral?
9
Could a cubesat be self propelled to the moon from LEO?
4
Where is the camera on the MarCo cubesat that took this "pale blue dot" type of photo of the Earth and the Moon?
4
Which way will the Neumann drive (on the ISS) point, what will be its maximum possible thrust?
7
Mass ratio of solar-electric versus radioisotope thermo-electric power for propulsion; beyond how many AU do RTGs win?
5
Will the Neumann drive start testing aboard the ISS some time in 2018?
5
How can the two MarCO cubesats remain reliably close to InSight during their six month trip to Mars?
3
Low-thrust spiraling to escape, is the flight path angle (gamma) at C3=0 always 39 degrees?
2
"Hohmann-Like" and Chemical / Electric Thrust Comparison
1
What calculations should I do to go from LEO to the moon with an ionic motor?
See more linked questions

3
Can a cubesat in orbit be operated like a R/C airplane in real time?
7
With current or near-future Cubesat propulsion technology, largest aphelion achievable?
3
Earth-Mars Radio Blackout: Is it possible to define an extended solar radius to solve this as a geometric problem?
0
What are the absolute maximum dimensions of a proper 6U cubesat? Does ASTERIA comply?
5
How can the two MarCO cubesats remain reliably close to InSight during their six month trip to Mars?
3
Cubesat mass density (kg/U) statistics?
2
Which Cubesat Cameras Actually Worked in Orbit before 2019?
1
Would it be possible to reach Mars using the same fuel-saving method SpaceIL's Beresheet is using?
9
Could a cubesat be self propelled to the moon from LEO?
1
What calculations should I do to go from LEO to the moon with an ionic motor?