How is atmospheric temperature measured from a satellite?

How does an Earth observing satellite measure the temperature of the atmosphere?

I'm not sure if I understand the basics behind this well enough to explain it but I'll give it a try anyway.

I've looked mainly at this report and on the wiki on satellite temperature measurements.

Measurements at different frequency bands give a solution of the temperature profile using the following formula.

$T_B$ is the measured brightness temperature by the satellite. The $W(0)T(0)$ term describes the upwelling radiance from the surface, dependent on the surface temperature, the surface properties, the frequency band that is measured, …

The integral part represents the column of atmosphere underneath the satellite.

$W(z)$ is a weighting function that is specific to the frequency band measured. 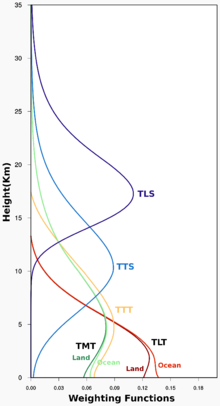 By combining measurements at different frequency bands you can get a solution for the temperature profile of the column of atmosphere underneath the satellite. The more frequency bands you measure in, the more resolution (vertically) you will achieve.

I don't know the method that is used to combine these measurements but I assume you can use something like least-squares to get to a solution.

Now for the second part of your question: as explained, they measure the temperature at different altitudes. Clouds mess up the measurements and need to be corrected for, usually using information from other instruments. Cloudtop temperature I believe would be easier to measure, since clouds have a fairly recognizable composition and it should thus not be too hard to extract the temperature using an interferometer.

Excellent answer already, just a few things to add that are a bit long for a comment to the above. The idea behind the weighting function is that different frequencies are absorbed by the same gases with different efficiencies, but absorption and emission are always the same. To couple to electromagnetic radiation at infrared and microwave energies, a molecule has to have varying electric dipole moment, so ordinary nitrogen and oxygen are invisible; what temperature sounders sense is rotational and vibrational modes of carbon dioxide and water, with different frequency bands used for each. Light, whether microwave, infrared, or other, of a frequency that is strongly absorbed, is absorbed and emitted many times, and the satellite measures the temperature of the last piece of the atmosphere that absorbed and re-emitted it. At 4 microns or 15 microns, an IR sounder sees the top of the stratosphere, but at 11 microns it sees the surface. In between, there are gradual changes that can be exploited with sufficient care in designing the instrument. A particularly good picture of this comes from Susskind, Barnet, and Blaisdell, "Retrieval of Atmospheric and Surface Parameters From AIRS/AMSU/HSB Data in the Presence of Clouds", IEEE Transactions On Geoscience And Remote Sensing, Vol. 41, No. 2, February 2003: 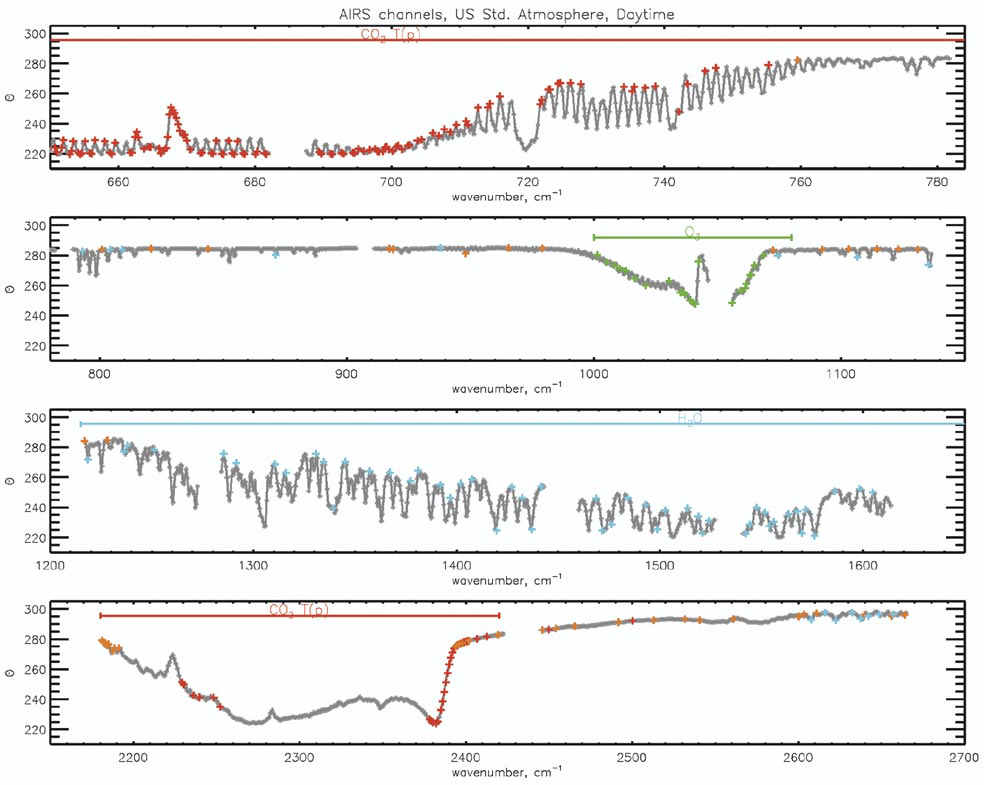 The vertical scale is brightness temperature, in degrees Kelvin. The gray curve has a + at the center of each of the almost 2,400 channels of the Atmospheric InfraRed Sounder instrument, the highest spectral resolution that ever flew, as far as I know. Look in particular at the right edge of the peak around 670 cm^-1 and the huge cliff around 2390 cm^-1: those channels right next to each other with rapidly changing brightness temperature lead to very sharp vertical resolution in the weighting functions. I'm not sure you can get the paper without paying, but the Algorithm Theoretical Basis Document version is freely available at https://eospso.gsfc.nasa.gov/sites/default/files/atbd/20070301_L2_ATBD_signed.pdf For a follow-up paper that tries to assess how well this works, try http://www.atmos.berkeley.edu/~inez/MSRI-NCAR_CarbonDA/papers/barnet_refs/2005JD006272_susskind.pdf

The biggest problem with atmospheric sounding is the form of the equation given above. What you measure, $T_B$, is an integral over the thing you want to find, $T(z)$. There are thus infinitely many totally different atmospheres that would give identical measurements, so which one do you pick? The standard approach is based on the idea that most functions we could plug in for $T(z)$ are highly unrealistic atmospheres based on even a loose understanding of meteorology. What people do is choose a set of simple basis functions that look kind of like real atmospheres, and find the best fit expansion by an iterative process of guessing a $T(z)$, computing the $T_B$ it would have given for each band their instrument measures, and adjusting the guess to produce an improved fit. Another complication is the integration is actually done in pressure, which then has to be converted to height by a different procedure that involves measurements from other instruments like surface stations and weather balloons. I bring up AIRS partly because it has the most advanced attempt I've seen to try to calculate and remove the effects of clouds, using the variation between the nine AIRS footprints that fit (3x3) inside each AMSU footprint, and fun with singular value decomposition to extract two to four layers of overlapping clouds at different altitudes, which can be a huge advance over the old "CO$_2$ slicing" technique (used since 1974, but updated as recently as Zhang and Menzel, 2002) for cloud top pressure measurement, but it only works if the cloud cover varies over those nine fields of view.

Not the answer you're looking for? Browse other questions tagged artificial-satellite atmosphere identify-this-object temperature measurement or ask your own question.