Could the Saturn V actually have launched astronauts around Venus?

One of the more interesting proposed uses of a Saturn V was to launch a manned flyby of Venus. Some of the cargo would have been stored inside the tank of the upper stage, which would be retained throughout most of the flight. The question I have is how large of a payload could the Saturn V have launched to Venus, and is it even remotely reasonable such a mission could have worked?

It takes surprisingly little delta-v to reach Venus for a flyby -- about 3850 m/s from LEO instead of the 3200 m/s or so required to get to the moon -- so while the payload would have to be reduced from the normal Apollo mission, it wouldn't have been impossible.

For Apollo 17, if we consider the payload to be the CSM, LM, and LM adapter, the total is 48.6 tons (per Apollo By The Numbers). For a trans-Venusian payload, my calculations say the mass budget comes down to around 31 tons.

That seems a prohibitive reduction, but for Apollo, the payload was largely propellant: lunar orbit insertion and trans-Earth injection on the CSM, descent and ascent for the LM. In total this was about 29 tons of propellant. Since there was no orbital insertion or landing planned, the only propellant needed would be for course correction, aborts, and braking for re-entry. The Bellcomm study proposed 8.6 tons of CSM propellant, dominated by the requirement for an abort within 45 minutes of trans-Venusian injection. With the reduced propellant load and elimination of the Lunar Module, there's enough payload budget to fully equip the living space.

From the diagram in the Wikipedia article, you can see the interior structure of the service module is shortened by about 40% to allow for the propulsion system to be recessed within the original dimensions, allowing more useful volume in the Environmental Support Module below. Eliminating most of the propellant tankage volume makes this possible: 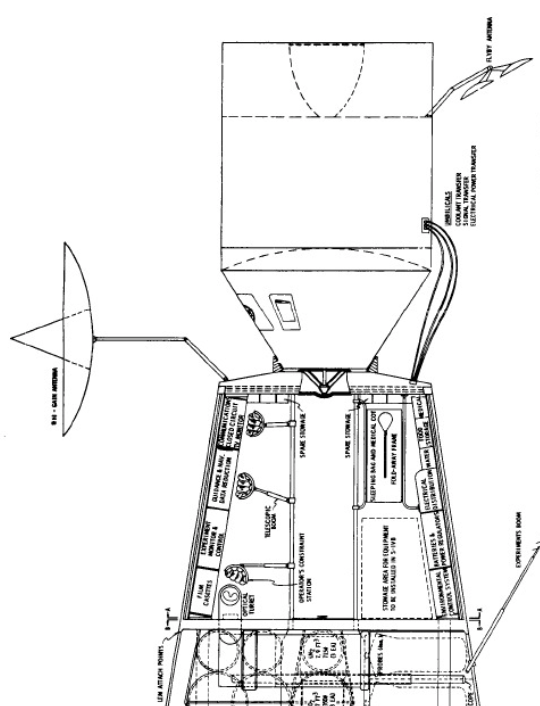 Overall the mission seems feasible. The trans-Venusian spacecraft is somewhat comparable to Skylab, which was also built into an S-IVB-shaped hull.

The longest Skylab mission was almost three months; this proposal would take 13 months: 4 months out to Venus and 9 months back! That is a long time for three people to live in an enclosed space, even a fairly roomy one. The Bellcomm study outlines requirements for environmental support; waste water would need to be recycled and oxygen recovered from CO2, neither of which was required by the short Apollo flights.

I'm a little skeptical of the wet workshop concept. Anything that you want to put in the tank at launch has to stand up to liquid hydrogen temperatures, and everything else has to be installed by the astronauts after the injection burn and vent, and thus needs to be stored somewhere else during launch.

Radiation exposure over a year-long mission outside of Earth's magnetosphere is also concerning. The Bellcomm study indicates that neither the Apollo CM nor the S-IVB tanks have thick enough shielding for a one-year mission, so additional shielding mass would have to be added to the S-IVB.

All in all it probably wasn't a good idea. It's a huge investment for a three hour crewed flyby; it couldn't accomplish anything that couldn't be done by a few Mariner-type missions.

If you want to do a similar Mars mission, by the way, you need to scrape down another 7200kg of payload. Good luck with that...

Not the answer you're looking for? Browse other questions tagged crewed-spaceflight apollo-program venus or ask your own question.

44
Why was Venus rather than Mars targeted for the first interplanetary landings?
8
Has there ever been crewed mission plans by any Space Agency to go to a solar system object other than the Moon and Mars?

28
What will be NASA's successor to the Saturn V rocket?
8
What stage of development are meteorology models of Venus?
7
Why did the design for Space Shuttle docking change?
8
Could the Apollo LM abort mode be engaged after touchdown? What would have happened if it was?
6
Could an Apollo Lunar Module have landed and returned without Earth assistance?
14
Why was the Saturn V considered to be human-rated after Apollo 6?