Let's consider an imaginary constant 1g rocket from Earth to Mars. What is the fastest possible trajectory?

Intuitively it seems that the fastest travel time is achieved with the "radial" trajectory (the blue line below). However, as both Earth and Mars already travel at their orbital speeds (30 and 26 km/s if I remember correctly), the "straightest" (shortest by distance) trajectory is S-shaped (the green line).

Is it almost-optimal trajectory, or we can do better?

(Yes, I know that it's impractical compared to Hohmann transfer, "short burns" transfers, or "low thrust" multi-orbit transfer. The question is about limits on transfer time if we have extremely good rockets - we are still limited by low-g survivability limits of humans)

The picture shows a sketch of Mars and Earth orbits, which for the purpose of the queston can be treated as cicular and coplanar.

One-g is large enough to make this easier: Times are short.

So I propose that the fastest way to get to Mars at 1g is to thrust straight toward the rendezvous point and orbital velocity you want, and turn over when half way there.

When you do that at 1 g, you build up outward speed so fast that the initial along-orbit speed is swamped. It takes less than an hour to build up an outward velocity larger than the initial orbital velocity! You really don't see the curves at the end of the sketch above: 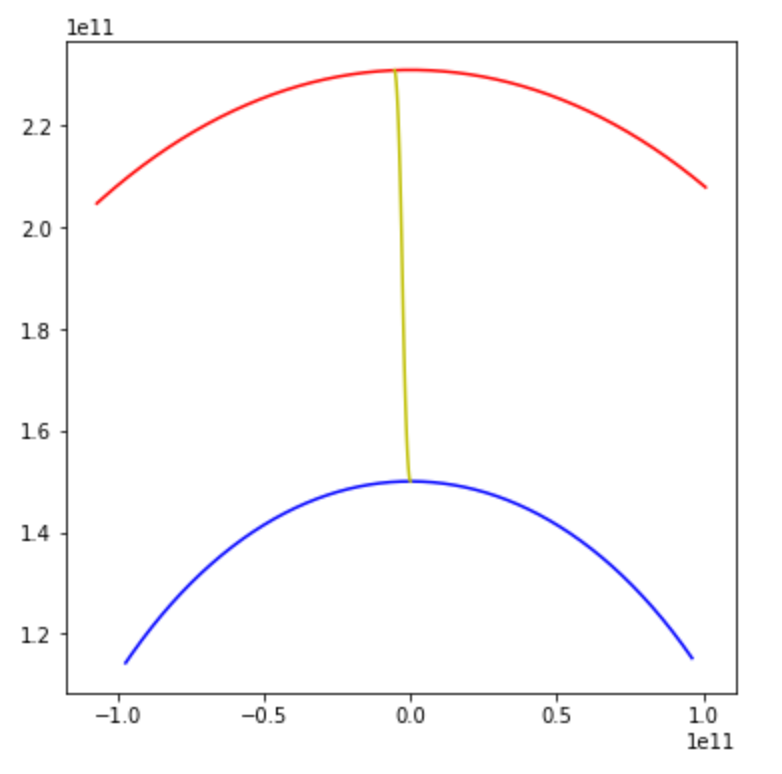 (small custom python simulation; mars is red, earth is blue) When you draw the rocket path with one-hour dots, you can see it's really moving at turnover: 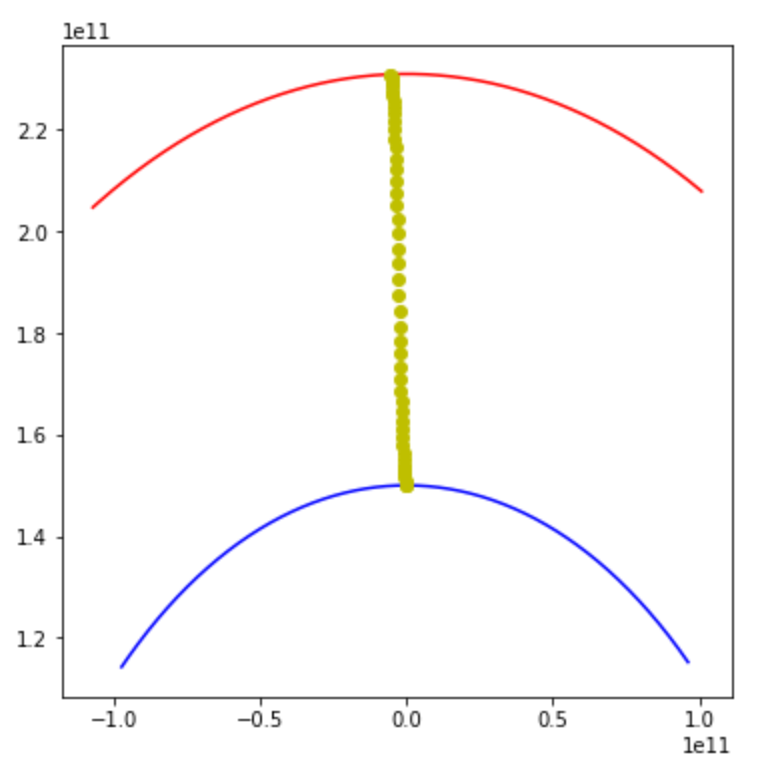 Finally, to answer the question about the fastest possible trip given g tolerance: That scales (in hours and g's) as $50/ \sqrt{g_{max}}$. If you can handle 4g for an extended time, you can be at Mars in about a day!

(Edit to include some comments)

Is this the fastest strategy?

In the simplified case (1) transfer between two straight-line moving objects (2) with no overall gravitational effects from the Sun and (3) no local gravitational effects from the starting and ending at planets, perhaps in orbit, then it's clear that a "go straight, turnover at the appropriate moment to make speed" is fastest. Not a single Gal of acceleration wasted!

How important are those assumptions?

For accelerations large enough that times are short (10 days?), curvature (1) and the Sun's 0.006g acceleration (2) don't change the strategy. You're still going as fast as you can to get to the place you need to be. For exact arrival, you've have to include it in calculations of direction and time, but this is a little bit like the difference between celestial navigation for an airplane and a sailboat: The boat moves slowly enough that navigation to a mile or two accuracy matters; much less accuracy is needed for the plane because it can get within 10's of miles and just home on the destination without major inconvenience.

Questions about departure and arrival details are more complicated; this Answer has ignored them. Leaving when your orbit is pointed at the destination is faster than leaving when it's pointed away. The initial and final orbits might be inclined, the planet orbits are askew, etc. But at large accelerations (i.e. anything near "survivability limits of humans") these are just computational inconveniences: A constant 1g flight starts off slower than many transfer orbit insertions (through you have to start in orbit; you can't leave earth's surface at 1g) but then you keep going all day, ending that day going 10X as fast as LEO in whatever direction you want.

Not the answer you're looking for? Browse other questions tagged mars orbital-maneuver or ask your own question.

31
Why not travel to Mars in 2 months?
3
Gradulated Accelerated Transfer
6
After a trans-Mars transfer, what is the direction of the rotation of the orbit around Mars?
3
Design of an elliptical transfer orbit
4
How to calculate a transfer orbit
6
Help choosing a gravity assist scenario for this problem
5
Mars and back, staying only a few days
26
Could we wait for Mars to come to us?
3
Orbit transfer trajectory options to the moon
10
Does going to Mars take the same energy as making a rendezvous with something going to Mars?