If a MarCO-type CubeSat were in orbit around Bennu, what kind of power would it need to communicate with the Deep Space Network?

This is a follow-up question to: What is the lowest power signal that the DSN can detect?

Essentially, I have determined that the asteroid Bennu (ranging from 25 to 350 million kilometers from Earth) is in view of 2 DSN dishes for 5 hours, followed by another 2 hours, per day.

I have also found that the power received from a copy of the MarCO CubeSat by a 34 meter dishes varies from about -95.7 to -118.6 dBW (these were calculated using the equation and values found in my comment below). The power sent, for reference, is about 35 dBW including transmitter gain, excluding receiver gain and distance losses.

The transponder being used is an Iris v2 (Spec sheet: https://www.jpl.nasa.gov/cubesat/pdf/Brochure_IrisV2.1_201611-URS_Approved_CL16-5469.pdf). According to the spec sheet, the maximum bandwidth available for X-band using the Iris v2 transponder is about 0.05 GHz.

The goal is purely to estimate Bennu's position by performing a differenced doppler with a MarCO CubeSat in orbit around Bennu (https://solarsystem.nasa.gov/basics/chapter13-1/). No extra information, such as sending back images, is necessarily required, though may be useful if possible. Telemetry is not critical, and can be automated on-board. How can I go about finding the ideal SNR, and verifying a successful reading? What rough data rate should be required for an accurate differenced doppler reading? How long should a signal be sent to Earth to get an accurate reading of the doppler shift?

Let me know if I need to specify or clarify anything else. Thank you.

note: based on discussion in comments the question has been revised and more details added, so I will be updating this answer with the day.

What power and signal-to-noise-ratio is required to send a signal from an asteroid to the DSN?

The short answer is that it depends on the required data rate. A 12 bit 1024 x 1024 monochrome image with 10:1 lossless compression (with error correction) would need about 350 bits/sec to be sent in one hour so let's use that as a starting point.

Let's work back from the dish specifications. This is from the really thorough Chapter 2 System Noise Concepts with DSN Applications in Volume 10 of the Descanso book series. (see also When was the idea behind the DESCANSO Book Series first conceived, by whom, and what is it's “mission”?)

Here is all of Volume 10: Low-Noise Systems in the Deep Space Network 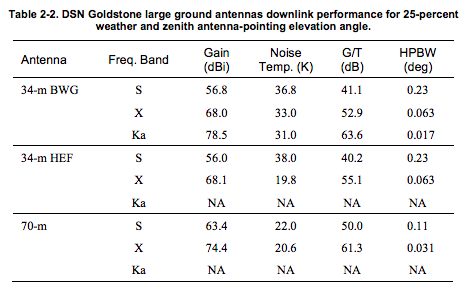 Let's choose a 34 meter dish at X-band and say the gain is 68 dB and the noise temperature is 33 Kelvin.

For an effective receiver temperature of say 33 Kelvin, the noise equivalent power will be about $k_B T \times \Delta f$ where $k_B$ is the Boltzmann constant or 4.6E-22 (Joules) times $\Delta f$.

Let's do things the normal way and specify a S/N ratio rather than calculate it. With good error correction built into the system it can be pretty low, but let's be very generous and go with +12 dB.

From what I wrote in Am I using Shannon-Hartley Theorem and thermal noise correctly here?

Where $S$ and $N$ are the signal and noise powers within the fully-used bandwidth $BW$.

If instead you'd like 1 MiB/sec, everything scales linearly and you'd need to receive about 3000 times more power or about -141 dBW, for the same specified S/N of +12 dB.

Not the answer you're looking for? Browse other questions tagged spacecraft radio-communication deep-space-network marco-cubesats or ask your own question.

34
What would it take to get a message to another star?
11
Why did the Herschel Space Telescope need helium coolant?
8
Arecibo: Advantages of Giant Dish?
13
How to calculate data rate of Voyager 1?
2
What is the lowest power signal that the DSN can detect?
4
How a spy satellite eavesdrop on another satellite?
2
When was the idea behind the DESCANSO Book Series first conceived, by whom, and what is its "mission"?

8
What do the different "Testing" codes mean on NASA's Deep Space Network website?
5
What is the timespan for a block of Phobos to reach a low orbit around Mars with a solar sail?
2
What would happen if the crew launched to dock with the ISS were incapacitated?
4
Why are deep space "beacons" usually UHF, so low (in freq) that DSN can't hear them? And how unusual is it for a Mars lander to have an X-band beacon?