Instead of approaching Mars from behind can we approach Mars from the front of its orbital path? [closed]

Nine months is what google maps said to get to Mars. I would like to know if fuel was no expense how long could we get to Mars other than the method below? Is the 9 months and the method just what our current technology is capable of?

What if we launch in the opposite direction to meet Mars head on? 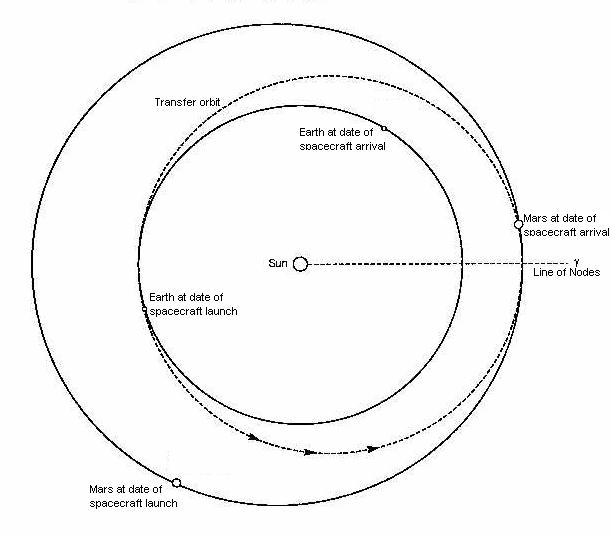 For some reason, I saw, or read this question as simply asking "How fast can you get to Mars if fuel is no expense". So this answers that question. I don't mind deleting it if that is considered appropriate.

Anyway, it depends what you mean by "if fuel is no expense". If you are assuming something more or less along the lines of current rockets, but are willing to use more fuel, and so carry less payload than is usually considered, there are trajectories that get you to Mars in three or four months within the capabilities of rockets currently being designed. The don't look very different from your picture, except that the transfer orbit actually reaches out past the orbit of Mars, although the rocket doesn't do that part of the orbit because it arrives at Mars first. Chemical rockets have nowhere near the capability to counter Earth's orbital motion (30 km/s roughly) and go in "the opposite direction" for instance. The usual way to represent the options for this kind of interplanetary trajectory is called a "pork chop plot" and shows options in terms of departure date, arrival date (or journey length) and delta-V required. There are numerous answers on this stack exchange which include examples of them.

If on the other hand, you imagine a "magical" rocket, powered by fusion or antimatter which can sustain a 1g acceleration continuously (much more would be uncomfortable for the crew) then the fastest trajectory looks very much like a straight line, and takes about 40 hours at closest approach (just use $s = \frac{1}{2} a t^2$ separately on each half of the journey. The motions of the planets and the Sun's gravity will be a small correction to this.

Finally if you just want to ship very small robust cargo items (such as individual protons or neutrinos) you could send them at close to the speed of light, for an absolute minimum delivery time of about 7 minutes.

Imagine you want to "hop a train"; jump onto a flatcar as it is rolling along the tracks.

The traditional approach is to run in the same direction the train is going, and then when you get beside the car make sure your speed matches, grab it, and jump on. It's dangerous, but very doable.

Your suggested approach is to run in the opposite direction the train is going, and then when you get beside the car, either grab it and jump on, or quickly reverse your speed and direction and board as in the traditional approach.

Neither of those non-traditional approaches would be pretty.

EDIT: After posting that, I realized that a much more graphic analogy would be running along the tracks to catch up to the train and pulling oneself onto the caboose, as compared with running toward the approaching train and jumping onto the front of the engine.

To reach one body in space from another, you need to consider their speeds, not just their positions. To leave Earth going the other direction, you need to cancel out Earth's orbital velocity around the sun (about 30km/s), and then when you reach Mars you need to turn around and match Mars's velocity. This is much more expensive in fuel than more direct flight, and most importantly, no faster. The flight time is due to the need to reach a position much further from the sun, not because we have to catch up to Mars.

Not the answer you're looking for? Browse other questions tagged mars crewed-spaceflight trajectory time or ask your own question.

29
Why not travel to Mars in 2 months?
6
Earth departure flight path angle for fast Earth-Mars transfers

29
Why not travel to Mars in 2 months?
18
What is the largest hurdle of the mission to Mars?
6
How are rockets guided to follow specific trajectory?
8
Which orbital maneuver is currently regarded as the most viable for a human mission to mars?
36
Why can't we use the same radiation shielding in Mars that we used when going to the moon?
5
Getting to Mars requires 12 ISSs of mass w/o tech advances?
4
Mars and back, staying only a few days
1
Trying to understand if or how operating a rover on Mars from Earth could work
4
How far will Curiosty be removed from Perseverance?