How does the New Shepard Crew Capsule sense proximity to the ground in order to trigger retropropulsion just before impact?

The final set of sensors included the NDL [Navigation Doppler LiDAR] from NASA Langley, the DLC [Descent and Landing Computer] from NASA JSC, and the OMPS [Optical Moon Proximity Sensor] procured from OADS [Optical Air Data Systems]. The NDL consists of an electronics box and laser connected by fiber optic cables to three telescopes mounted at fixed angles within one of the transition tunnels.
The NDL sends near infrared (1550 nm wavelength) laser beams to the surface, and the reflected returns are detected to provide an estimate of the lander’s velocity and range relative to the ground.
...
The OMPS ... consists of a small electronics box and four telescopes. The measurement principle, while still a LiDAR at 1550 nm wavelength, is different from the NDL and leverages OADS’s years of development in terrestrial LiDARs for wind turbines, helicopters, and aircraft.

The NDL LiDAR is documented here.

The NDL was the one used for real-time navigation, while the OMPS's measurements were only recorded for post-flight evaluation.

Correction: The NDL and OMPS were mounted near the top of the booster, rather than on the crew capsule, as shown in part of figure 4 in the paper (below), and as implied by figure 12 which is a photo of the booster just before landing annotated with laser directions. 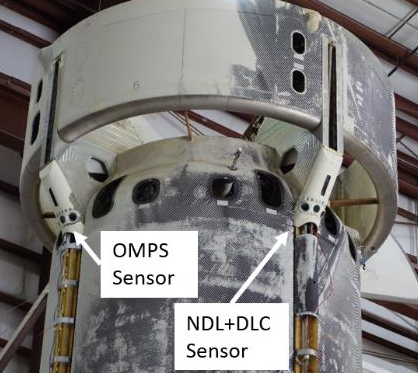 Right before touching down, a retro thrust system expels a cloud of air beneath the capsule to create a gentle landing around 1 mph in the West Texas desert.

This retropropulsion (not a rocket, just a tank of compressed air?) must be commanded by software just like all aspects of its flight. But I don't know what kind of sensor triggers that command.

40
Soyuz landing ground detection
13
Did Apollo have braking rockets for soft landing on Earth?
17
Why does this boat have a landing pad? (SpaceX's GO Searcher) Any plans for propulsive capsule landings?
13
How does a gamma ray altimeter work? What kind of sensor is used?
4
Alternative to GPS navigation for vertical landing, especially on other planets
3
Hard (15mph) landing, no retrorockets fired?
3
When did soviet capsules begin using retropropulsion immediately before landing?
0
Are any space agencies working on an (essentially) 100% reliable sterilization technique for spacecraft bound for subsurface ocean worlds?
2
What are the innovative aspects of New Shepard's "retro-thrust system on the bottom of the capsule"?

14
Why does Blue Origin land the crew capsule separate from the booster?
13
How does a gamma ray altimeter work? What kind of sensor is used?
4
How does launching suborbital payloads on New Shepard compare to sounding rockets?
1
How are New Shepard's tilting fins and gimbaling nozzle used together (or separately) to control the rocket?
3
When did soviet capsules begin using retropropulsion immediately before landing?
6
How many burns does New Shepard have during a descent?
1
Why does the New Shepard Crew Capsule sometimes deploy 3 parachutes and sometimes deploys only 2 parachutes?
2
How high can New Shepard fly?