How much propellant is used up until liftoff?

How much of the total propellant mass (fuel+oxidizer) of the first stage/boosters is usually burnt between ignition and liftoff?

For the Space Shuttle:

Using the same approximate curves (with all their assumptions and limitations) used in the answer to How does the Space Shuttle's SSME engine's thrust vary after ignition?, we can integrate the SSME flowrates to get a startup propellant consumption of:

Since liftoff was virtually instantaneous after SRB ignition (certainly to the precision of these calculations) we can ignore SRB propellant usage preliftoff.

Using the ET loading numbers from Challenger disaster: how full was the external tank at the time of destruction? (LO2 1,387,457 lbm, LH2 234,265 lbm) we can calculate the % usage of ET propellant prior to liftoff as approximately 0.5% for both propellants.

Since writing this answer, I have come across a NASA document containing a shuttle MPS propellant inventory. It shows that my calculated numbers above were low, likely due to the crudeness of the curves used and because I omitted to include the interval between completion of the engine start phase and liftoff. The document gives 1733 lbm LH2 and 9434 lbm O2 used pre-liftoff with the corresponding percentages of 0.75% LH2 and 0.68% LO2 - using the ET loading numbers for Engine Start Command in the page below. 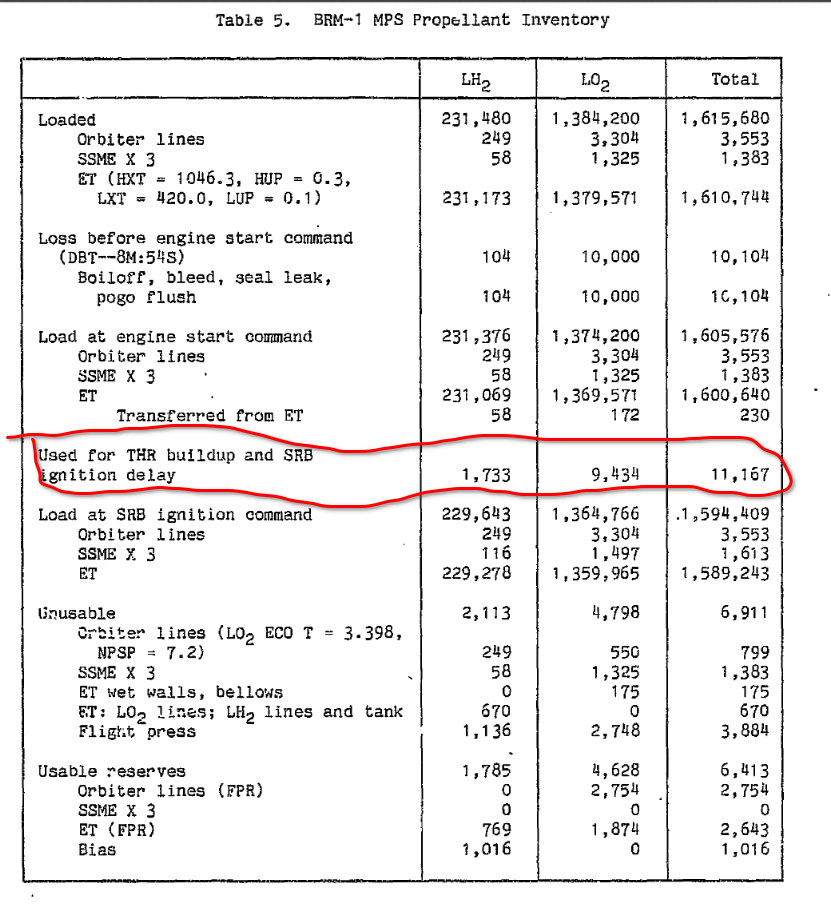 Not the answer you're looking for? Browse other questions tagged launch fuel efficiency or ask your own question.

29
Challenger disaster: how full was the external tank at the time of destruction?
4
Are rocket tanks being filled up until the last seconds before liftoff?
9
What rocket uses the largest percentage of Fuel/Oxidizer before liftoff?
1
How does the Space Shuttle's SSME engine's thrust vary after ignition?
2
Is "liftoff mass" = "ignition mass"?

19
How much fuel was used for a Space Shuttle launch?
1
How does the mass of launchers change over time between ground and orbit?
5
chemical propulsion with separate fuel and propellant?
29
What was the result of the propellant predictions in the last chapter of "Ignition!"?
7
How to determine $\Delta v$ loss due to gravitational pull from earth
8
How does one "dump" or deplete propellant without changing spacecraft attitude or trajectory?
4
Are rocket tanks being filled up until the last seconds before liftoff?