Is the equatorial mountain range of Iapetus due to cold erosion?

Iapetus, satellite of Saturn, has a huge mountain range along about half its equator.

On this list of our solar system's biggest mountains, it is the only entry with uncertain origin.
..The unmeasured peaks of the nameless range are estimated nearly as high as Olympus on Mars.

Here are 4 hypotheses for the equatorial ridge's formation: wiki again
(To me, the 4th sounds right but incomplete, & the rest seem unlikely)

An explanation to the equatorial ridge of Iapetus must also explain the similar, yet even more striking feature of two other Saturn moons, Atlas and Pan. 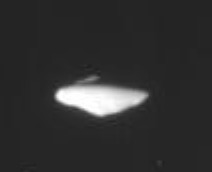 This may rule out the explanations involving geological activity, because Atlas and Pan are too small to have any. This leaves the explanation that the ridges are material from the rings of Saturn swept up by the moons.

To address the second part of your question, regarding cold-erosion, this is due to glaciers. Glaciers consist of ice, like Iapetus, but this ice is not moving like on Earth, thereby causing no erosion due to friction. Water in the outer solar system is best viewed as just another type of rock. Like most objects in space, the mountain range of Iapetus has not received any notable erosion.

Not the answer you're looking for? Browse other questions tagged planetary-science moons saturn cassini geology or ask your own question.

6
What is responsible for the different colors of Iapetus?