Could OneWeb's satellites be launched on Electron rockets?

OneWeb's satellites weigh about 150 kg each, which is within the range of the Electron rocket. However I am not sure about the target orbit(s).

Technically speaking, could OneWeb launch its satellite constellation on Electrons?

tl;dr: According to currently published numbers, No, not at present, but...

The constellation is strictly polar orbits, the slide below shows an inclination of 86.4 degrees which should be accessible by launches both from New Zealand and Scotland.

Both Wikipedia and Rocketlab say that the vehicle can lift 150 kg to a nominal 500 km sun-synchronous orbit. That's an inclination of about 97 degrees, very slightly retrograde. OneWeb's orbits are very slightly prograde.

How long would it take?

The Mahia site is licensed for a maximum launch rate of once every 72 hours over a period of 30 years—Rocket Lab believes the actual rate would average once per week—while the Kaitorete site would only have been licensed to launch once per month.

To launch 648 satellites at a rate of once every 72 hours would take five years, and that is probably a little too slow for their business model. But combine that with launches from Scotland and it seems possible. 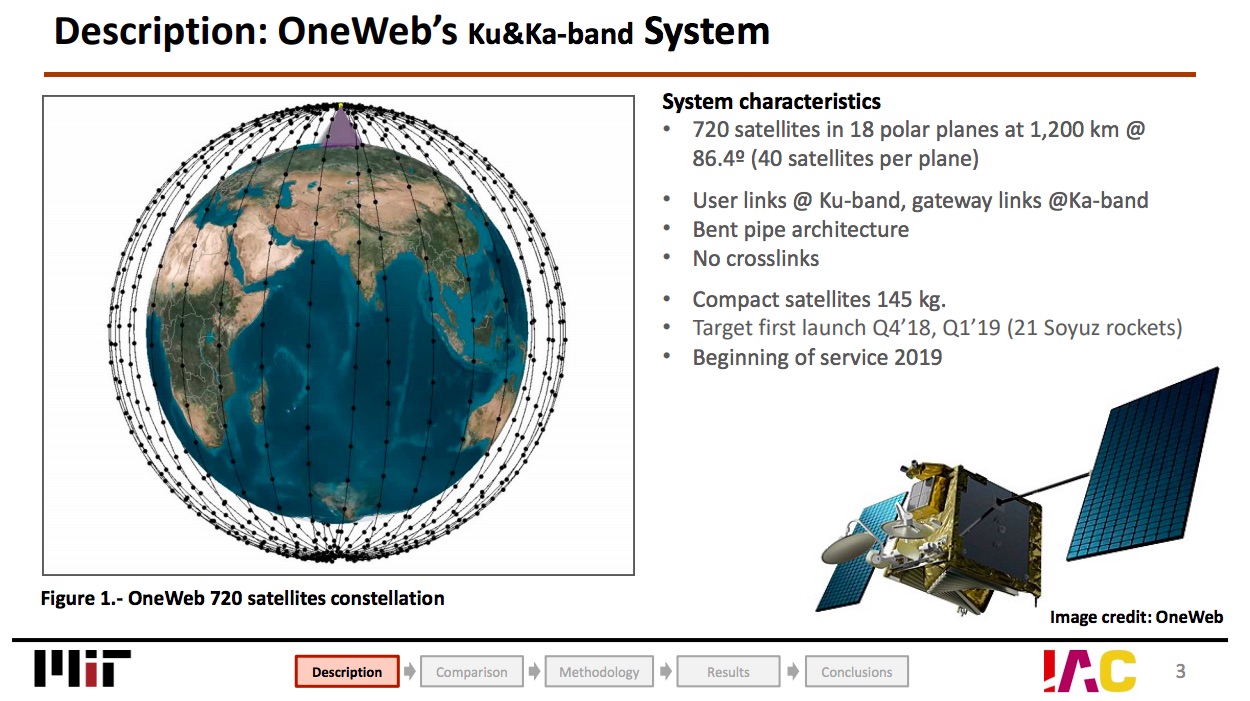 Not the answer you're looking for? Browse other questions tagged payload electron oneweb or ask your own question.

3
Why is Rocket Lab's New Zealand launch site good for polar orbits?
3
What is OneWeb's constellation's “progressive pitch” and how does it avoid interference with Ku-band satellites in GEO everywhere on Earth?
2
Is there a significant difference between launching a polar orbit mission south from New Zealand versus launching it north?
3
Why put both Orbex and Rocket Labs on adjacent launch pads in Scotland?

5
What are the two very large “blue” cylinders attaching to the combustion chamber of each Rutherford Engine?
7
Is it possible to develop a small orbital rocket, like RocketLab's Electron, for a weapons delivery system?
8
How much payload can Falcon Heavy Reusable lift?
1
Why does Rocket Lab plan to deploy first, circularize later?
5
Regulations preventing SpaceX from saying “no” if OneWeb asked them to launch their satellites?
3
What is OneWeb's constellation's “progressive pitch” and how does it avoid interference with Ku-band satellites in GEO everywhere on Earth?
2
Impact of Constellations on Space Debris and Launch Windows
1
How do OneWeb satellites' antennas work?