What is OneWeb's constellation's "progressive pitch" and how does it avoid interference with Ku-band satellites in GEO everywhere on Earth?

The satellites will operate in the Ku band, communicating in the microwave range of frequencies in the 12–18 GHz portion of the electromagnetic spectrum. The satellites use a technique called "progressive pitch" in which the satellites are slightly turned to avoid interference with Ku-band satellites in geostationary orbit. The user terminal antenna on the ground will be a phased array antenna measuring approximately 36 by 16 centimeters (14.2 by 6.3 in) and will provide Internet access at 50 megabits/second downlink bandwidth (almost certainly less uplink, but this number remains hard to pin down).

Question: What is OneWeb's constellation's "progressive pitch" and how does it avoid interference with Ku-band satellites in GEO. Earth is large and each OneWeb satellite's footprint is substantial (as is each GEO satellite), so how does this prevent interference over all necessary area at the same time?

Traditionally, transponders have pointed straight down. If OneWeb satellite passed "under" a geostationary satellite, the OneWeb signal would interfere. That's handled by turning off the OneWeb satellites in that case. (They are in inclined orbits; none of them are exactly over the equator)

But the OneWeb transponders have some beam width, so it's possible to interfere even when not directly under:

(From an ITU presentation at https://www.itu.int/en/ITU-R/space/workshops/SISS-2016/Documents/OneWeb%20.pdf ) Note the upper dashed line, which shows interference: The OneWeb satellite and GSO satellite appear in the same spot in the sky.

OneWeb can change the geometry of those off-vertical interference windows by tilting their beams, which in turn is done by pitching the satellite: 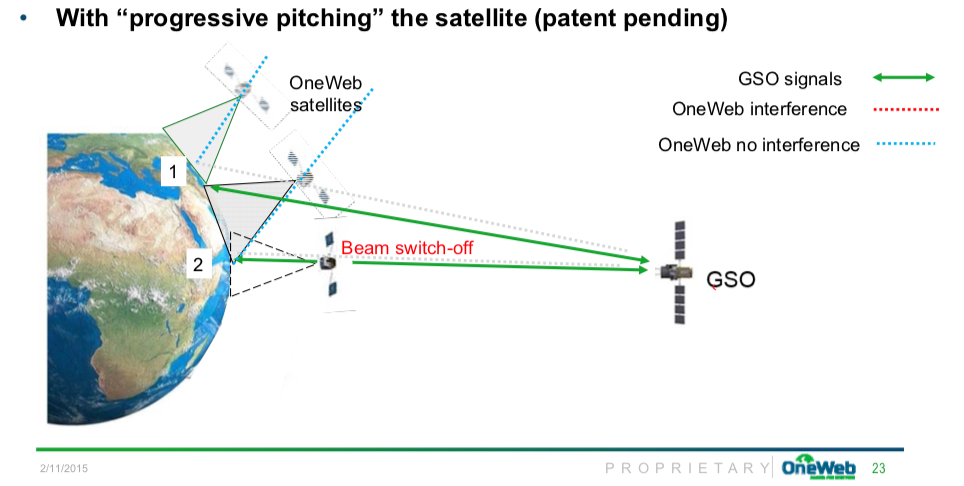 (ibid) Note that the spot on the Earth is now being served by a different satellite, at a different point in the sky which doesn't line up with the GSO satellite.

Not the answer you're looking for? Browse other questions tagged low-earth-orbit communication-satellite geostationary oneweb or ask your own question.

3
Could OneWeb's satellites be launched on Electron rockets?
3
How is satellite's footprint/coverage calculated?

3
How do polar satellites disrupt communications between GEO satellites and ground control?
12
How can just making the ground broadcast stronger neutralize a zombie(sat)?
8
How do commercial broadcast satellites in GEO produce such carefully shaped signal footprints?
5
Regulations preventing SpaceX from saying "no" if OneWeb asked them to launch their satellites?
1
How do Inmarsat 5 F4's beams correspond to all of these antennas and feeds?
2
Impact of Constellations on Space Debris and Launch Windows
3
How does the "eccentricity-inclination vector separation" technique work for colocated GEO satellites?
10
What does "clearing of C-band spectrum" mean and why will it cost Intelsat a billion dollars?
13
Is it possible for LEO satellites to detect a usable signal from regular mobile phones on the ground?
2
How does one calculate the look angle for non-geo satellites (i.e. LEO, HEO, etc.)