Highest stage count that are used one right after the other?

Here I'm asking for the highest stage count used one right after the other. Unlike the stack that got to the Moon, each stage should ignite quickly after the previous stage.

As far as I can tell, the most ever used in sequence is 5 on India's ASLV. It only ever succeeded once, though. Wikipedia mentions a possible 5th stage for Titan IVB but I haven't seen actual references to it (possibly it's referring to the Inertial Upper Stage IUS)

Seems that as technology progressed the number of stages has been reduced from the common 3-4 stages down to 2 for nearly all modern launch systems.

Would love to see if anyone finds an instance where more stages were used! 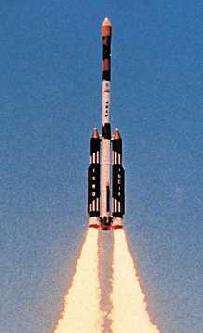 As discussed in one of the linked questions, Minotaur V is another 5-stage orbital launcher.

Jason is a 5-stage sounding rocket.

Not the answer you're looking for? Browse other questions tagged rockets stages or ask your own question.

3
Is there any six stage rocket?
10
Does a high staging number have diminishing returns? Is there a way to address that mathematically?
14
Highest stage counts in actual launchers?
3
Help me understand what Farside, a ten "stage" rockoon looked like? How was it configured?

24
Why did the Saturn V stage fairing appear to burn after separation?
10
What are the “nacelle” like protrusions on the first stage of Black Arrow?
9
Why rotate the Falcon 9 2nd stage after deployment?
26
Why do some rockets not ignite all their engines during liftoff? (GSLV MK3 LV)
8
What is used to connect the side boosters to the first stage?
3
What are the advantages of separating a stage few seconds after its burn out?
2
What is the most energy efficient & inexpensive propulsion system other than chemical fuel oxidizer that could be used in rockets?
10
Does a high staging number have diminishing returns? Is there a way to address that mathematically?
4
How is it provided for that the uppermost stage doesn't orbit with the capsule/satellite together?