Maximum height for a Mars Balloon?

The altitude record for an unmanned balloon is 53.0 kilometers.

If we use this Earth based record for an estimate of the maximum possible height of a balloon started from Mars surface, what height would result?

What is the pressure at 53 km above Earth and what is the height above Mars with the same pressure?

Of course a balloon with a volume of 60 thousand cubic metres would be very difficult to realize on Mars.

That same zero-pressure balloon would float at the same density at Mars. The altitude equivalent to that density will vary over the Martian year, since the mass of the Martian atmosphere varies $\approx\!25\%$ over that time! Since I have MER atmosphere models handy, I find that that density was at an altitude of $\bf 35.7\,\mathrm{\bf km}$, at an LS of $328^{\Large\circ}\!$, about two-thirds of the way into Southern Summer (the time of the Spirit landing).

Note that what matters here is density, not pressure. A zero-pressure balloon is an accurate densitometer at float altitude. Also, the difference in the compositions of the atmospheres, in particular the average molar mass, is already accounted for in the density. 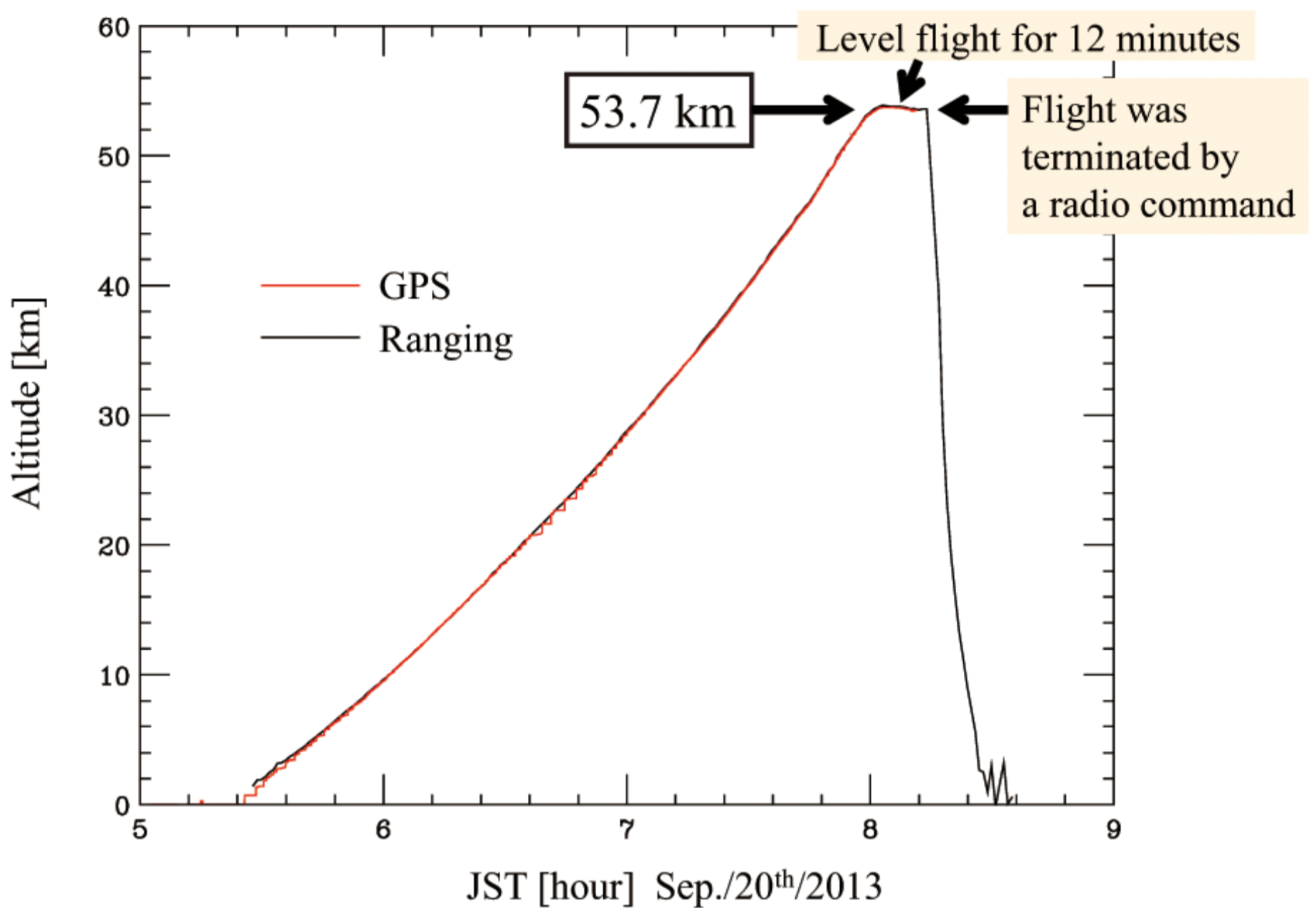 There is one other key difference that could affect the maximum altitude. That is temperature. At float altitude in Earth's atmosphere, the temperature was $264\,\mathrm{K}$. At the equivalent float altitude in Mars' atmosphere, the temperature would be about $178\,\mathrm{K}$. This would have no effect on the float altitude. That is, if the balloon works. However the fact that the Martian atmosphere is much colder than Earth's could change the behavior of the $2.8\,\mathrm{\mu m}$ thin polyethylene envelope. It might become brittle enough that it would not survive launch or ascent, and break when encountering aerodynamic forces, such as gusts of wind. Then the maximum altitude could be much lower, possibly not even making it off the surface of Mars.

By the way, $80,\!000\,\mathrm{m^3}$ may sound like a large balloon, but it's actually pretty small. The mass of the entire system, balloon, helium, gondola, parachute, and payload, was $41.1\,\mathrm{kg}$. Typical scientific high-altitude balloons are measured in the tens of millions of cubic meters, with thousands of kilograms of payload.

What is the pressure at 53 km above Earth and what is the height above Mars with the same pressure?

According to Wolfram Alpha, the pressure on Earth at 53km is 55 Pascals compared to 100,000 Pa at sea level. Quite the difference.

Wolfram Alpha gives an atmospheric pressure on the surface of Mars as 620 to 1100 Pa. Presumably due to wide seasonal variations in temperature and the problem of not having a "sea level" to agree upon.

We can use the NASA supplied equations to figure out when the Martian atmosphere hits 55 Pa. NASA uses 699 Pa as pressure at the surface.

We can check our work by plugging the height into the original equation. We should get 55 Pa.

Whether this means that's the highest we could fly a balloon on Mars, I can't say for sure.

Not the answer you're looking for? Browse other questions tagged mars balloons or ask your own question.

2
How high could a weather balloon be used on Mars without rupturing?
4
What would it take for a balloon to reach an altitude of 65 km (214,000 ft) above the Earth's sea level?
7
How does the sunlight affect the height of the atmosphere?
2
Could a helium balloon on Mars and on Triton float at air pressures lower than it could on Earth due to the bodies' low gravities?
3
Can something float on top of the atmosphere?

12
What risk management options are available for Mars orbiters and rovers to mitigate threat of impacting with Siding Spring cometary debris?
2
Power supply for (30km stratosphere) school's High Altitude Balloon project
2
What cosmic ray sensor is attached to this Balloon?
14
Does the Curiosity rover really have a chance of driving to the top of Mt. Sharp?
11
Did Echo 2 remain spherical without requiring gas pressure? If so, how is this known to be true?
4
How are martian dust devil maps made?
5
How were Mars' zero elevation datum defined? What are their shapes?
2
Could a helium balloon on Mars and on Triton float at air pressures lower than it could on Earth due to the bodies' low gravities?
4
What would it take for a balloon to reach an altitude of 65 km (214,000 ft) above the Earth's sea level?