how is the g-load for an atmospheric re-entry vehicle measured? and why is it relevant?

Out of curiosity, I always heard about g-loads regarding entry vehicles and in aviation, I understand the relevance of the concept when humans are involved, and for unmanned missions I gather that due to higher accelerations during descend we would have higher stresses acting on the surface of the vehicle, and we don't want that because it would cause structural failure. Am I understanding this correctly? I would be tempted to think that the stresses I am referring to are related to the friction between the atmosphere and the surface of the vehicle but I am probably missing something in my analysis. Thanks for your input!

The Orbiter was structurally certified to certain g-limits during entry based on its landing weight. A graph of the g-limits versus weight can be found in the Space Shuttle Flight Rules page 4-123. TAEM stands for Terminal Area Energy Management and refers to the latter part of the entry trajectory. Nz refers to the Orbiter body Z axis acceleration expressed in g's. The landing weight is in thousands of pounds. 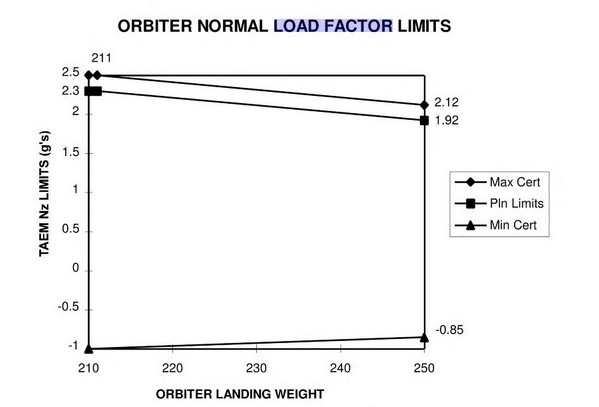