How does the sunlight affect the height of the atmosphere?

I was reading this question about how high a Mars balloon could go in the mars atmosphere.

How much would the sunlight affect how high the atmosphere reaches? Is the atmosphere on Earth elongated on the side towards the sun due to increased temperatures/lower density or would it migrate to the lower density area and spread out-- hence the prevailing winds, Coriolis effects etc...?

If so, by approximately how much will the atmosphere's 'height' change here on Earth? I expect the answer to be "negligibly" due to the factors mentioned above, but if I could get a quantitative answer/educated guess that'd be awesome.

Using uhoh's linked wikipedia page, I guess I want to focus on how much the UV radiation and heating from the sun affects the atmosphere.

This question isn't answerable in the form its asked as the "height of Earth's Atmosphere" is not defined in any meaningful way. The reason for this is that there is no clear ending to the Earth's atmosphere. It tapers off exponentially with height, but it never ends exactly. You could talk about the height of the Karman line changing because the Karman line is defined as the height at which the velocity required to maintain lift is equivalent to orbital velocity. Since the velocity to maintain lift is dependent on atmospheric density the Karman line does change day to day (in its original definition, I am not going to consider the bastardized let's just say its 100Km answer).

Height is not definable, but density at an altitude is. This is the go to metric, so I will answer the question in this form.

Generally aerospace engineers talk about atmospheric density at some altitude as that is a much more usable metric. I posted an example Earth atmospheric model from the MSISE-90 model of the Earth's atmosphere. You can see the density at an altitude of 200km or more often varies by an order magnitude depending on solar activity. This has important effects on satellites and how fast they de-orbit. Satellites will de-orbit faster during high solar activity than low solar activity. This is actually why it is really difficult to predict with high accuracy when satellites will re-enter. Since it is difficult to measure the really low atmospheric densities at LEO altitudes, it is also difficult to predict satellite re-entry times exactly. This is why uncontrolled re-entry dates are given with plus or minus 2 weeks certainty.

Basically density does change, so yes.

Screen shot from http://www.braeunig.us/space/atmos.htm which is archived here 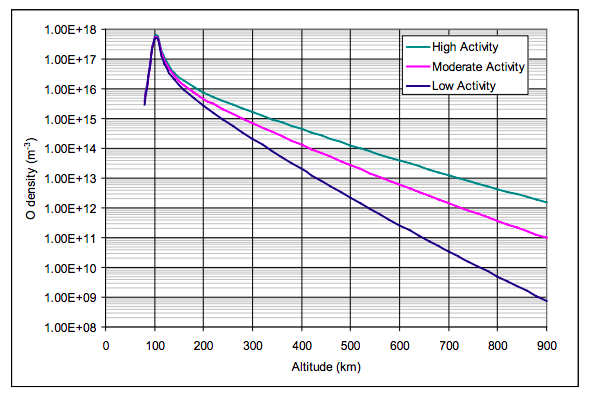 24
How does Venus' thick atmosphere survive against the solar wind?
5
Atmospheric scale height, how is it calculated?
23
Why does Titan have an atmosphere?
9
Would a mars base need to expel excess heat?
11
Will uncovering the ice deposit in Utopia Planitia improve the climate on Mars?
1
Could a helium balloon on Mars and on Triton float at air pressures lower than it could on Earth due to the bodies' low gravities?
4
Fjeldbo, Kliore, & Eshleman 1971 Fig. 22 planetary atmosphere index of refraction increasing with altitude; physics insight or convenient abstraction?