I'm working on a spaceflight simulator (FSX SpacePort), and currently developing instrumentation for NASA's Orion capsule. I'm using whatever little info is available on line and trying to identify various readouts and symbols on the Orion's Multi-Functional Display (MFD) instrumentation. In particular, Orion's Primary Flight Display MFD mode has 3 readouts that I can't quite identify: 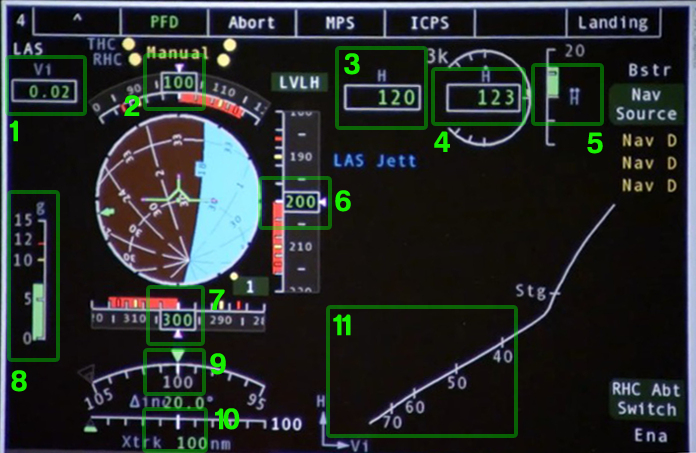 The readouts, numbered and framed in faint green, are as follows:

Does that seem correct? Also, any guesses on readouts for 6, 7 and 10?

Ok - after a bit more research, I figured out what the readouts in question are: the attitude "ball", along with readouts 2, 6 and 7, are part of a spacecraft-specific instrument called Flight Director Attitude Indicator (or FDAI): 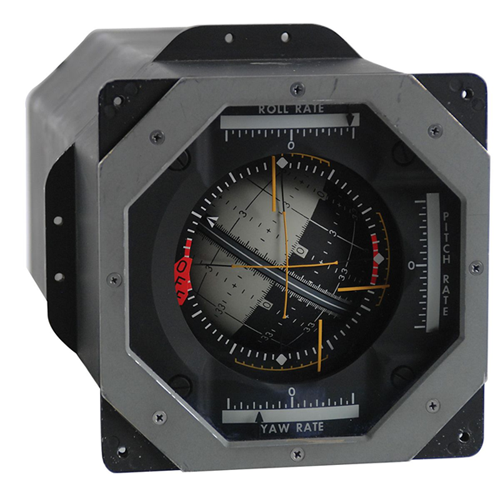 The readouts 2, 6 and 7 are, respectively, Roll value and rate, Pitch value and rate and Yaw value and rate, with red bands indicating the rate amount. These readouts are usually not found in aircraft instruments, but in spacecraft, they are vital pieces of instrumentation. In space, there are no external factors (atmosphere) that would dampen the "spin" of the spacecraft in all 3 axis, so these readouts are vital in determining the attitude state of the spacecraft. The aircraft version of this instrument is gimbaled on 2 axis (pitch and roll), since aircraft usually always points in the direction it is travelling. However, this instrument is gimbaled on 3 axis, that includes yaw axis, since spacecraft does not necessarily need to point in the direction it is travelling.

Not the answer you're looking for? Browse other questions tagged orion-spacecraft instrument avionics or ask your own question.

6
Can the Orion be reused in space?
11
Could Orion capsules be reused?
4
Orion Heat Shield
6
What's next for Orion?
5
What technical details exist about the Soyuz TMA spacecraft and its Simvol Displays & Cockpit Controls?
7
What about Orion ISS missions?
4
How much delta-v does the Orion spacecraft have?
8
What capabilities does Orion have that Dragon-V2 does not?