Could a “nuclear turbo-jet” be built?

Being familiar with jet engines myself, I wonder whether a similar device could be built to provide high $I_{\text{sp}}$ and high thrust in vacuum and space. Using the tried-and-true turbojet formula as an analogy --

A jet engine is streamlined, has very low vibration compared to its pulsed peer the piston engine, and has the amazing ability to burn nearly every hydrocarbon on the market provided that you can jet it out of the fuel line. I imagine plasma is not that different than gas and a nuclear turbo-jet could offer similar advantages while providing very high exhaust speed and thus strong thrust at a low mass flow rate. 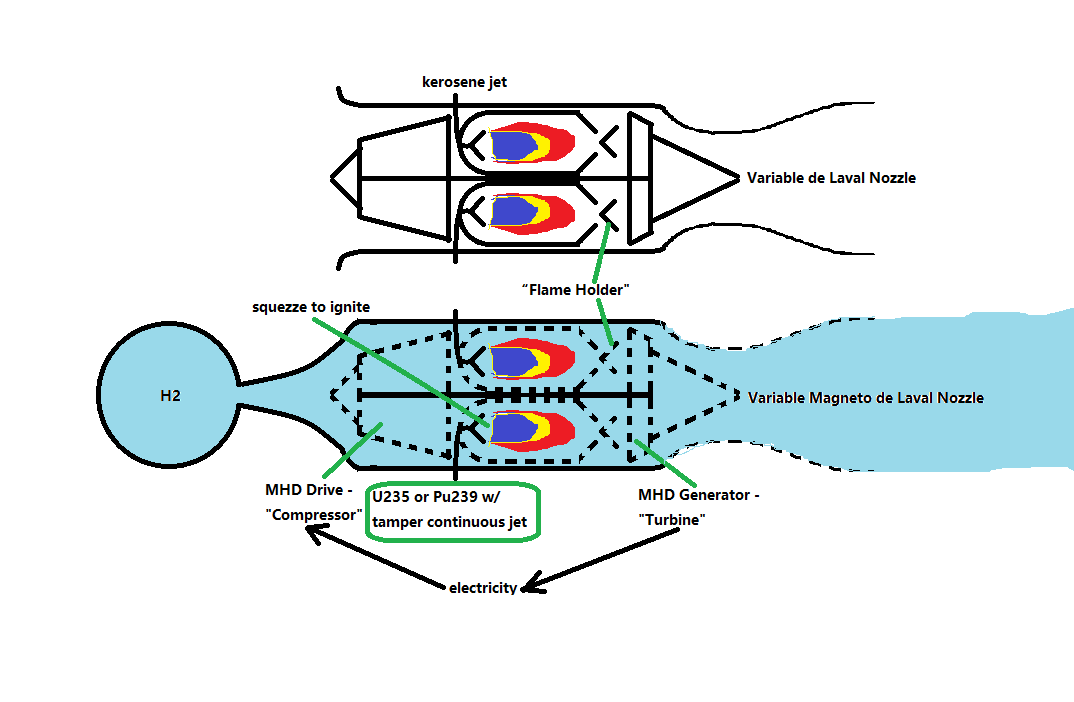 Squeezing a little bit of fissile material through the engine at a time will not produce much fission. The neutrons come out fast and need to be moderated by a lot of intervening material to slow them down before they are captured by the next nucleus.

To make the chain reaction, you need a nuclear pile with a lots of fuel and lots of moderator mass all in one place. This is why reactors are big and heavy and don't really fit into aircraft or spacecraft very well.

Neutron damage would make your fan blades brittle quickly if there was a lot of fission, which there won't be.

Compact sources of nuclear power like RTGs use spontaneous nuclear decay rather than chain reactions. But that means you can't induce "ignition" inside the engine.

A really interesting idea was proposed based on a nuclear isomer and is discussed at length in this excellent answer to the question How did Northrop Grumman propose to make the Global Hawk nuclear powered?.

The reaction works because a proportion of the hafnium nuclei are “isomers” in which some neutrons and protons sit in higher energy levels than normal. X-ray bombardment makes them release this energy and drop down to a more stable energy level.

Here the idea was that an X-ray generator (which can be compact) is used to stimulate isomeric states to decay and release energy promptly. It's a little bit like the X-ray laser concept except the excited state lasts days or years rather than microseconds, and there's no optical gain. It's not a LASER, it's only a SER (stimulated emission of radiation) without the LA.

Not the answer you're looking for? Browse other questions tagged rockets propulsion nuclear design-alternative or ask your own question.