Are there any benefits to launching from Vandenberg AFB instead of Cape Canaveral?

Launching from Cape Canaveral has many benefits, including launching over the ocean (in case something needs to be dropped off) and saving energy by being at a lower latitude than most of the United States. Like NASA, why doesn't the Air Force also have a launch complex in Florida instead of southern California?

Good question. Air Force does have a launch facility on East Coast, like @PearsonArtPhoto mentions, in the Cape Canaveral Air Force Station, and I believe they could also launch from the Wallops Flight Facility or Kennedy Space Center. But I'd like to focus on whether there's any advantages in launching from the Vandenberg Air Force Base, i.e. from the US West Coast in particular.

For commercial launches to prograde, low-inclination orbits, I can't think of any convincing advantages except that it might, in some cases, be easier to retrieve booster and core stages from land than from water, or slightly easier to assume highly inclined or polar orbits over specific territories (e.g. overflying less densely populated areas). This would depend on launch vehicle used though and their possible flight profiles, but in case of launching into retrograde or polar orbits, Vandenberg is more suitable. For example, for Space Shuttle launches from Vandenberg AFB, NASA quotes advantages as:

Launches from Vandenberg have an allowable launch path suitable for polar insertions south, southwest and southeast. 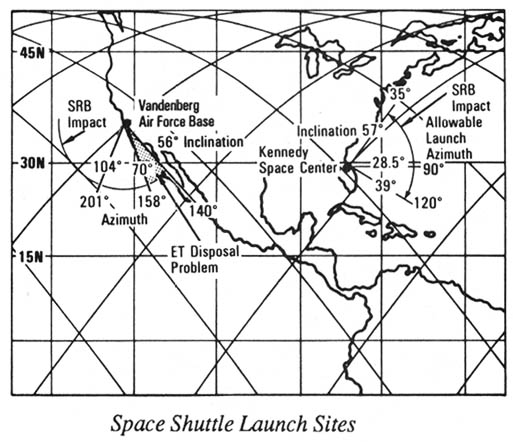 For military launches though, the large part of the initial ground track during a rocket launch would go over the territory of the United States in case of Vandenberg AFB, where with East Coast launch sites, it is soon over the international waters of the North Atlantic. That might be an advantage with launches where it's absolutely imperative to leave all the tracking to US owned and operated tracking stations (including the ones in North Atlantic that would extend this range due East) and, sort of speak, also cover the tracks with any staging where the locations where the core stages fall could reveal intended target orbit of the space bound vehicle.

For example, not a U.S.A.F. related incident, but I remember reading about Russian spy ships disguised as fishing trawlers mooring too close to the Guiana Space Center and even delaying some launches until the French navy managed to chase them away (I'll try to find some links). Why is that potentially a problem becomes more apparent when you consider that assumed orbits of satellites can reveal their purpose. For example, Molniya orbits are particularly interesting as the satellite lingers over certain locations on the ground for a long period of time (relatively speaking) and at a low altitude perfect for remote sensing. But these orbits are also highly inclined and highly eccentric, something that can be inferred through tracking the flight paths of launched rockets, especially if the launch vehicle's performance is fairly well understood (which can be inferred via previous launches or other means of espionage, like e.g. stolen documents).

And trying to interfere with communications with the launched vehicle to sabotage the launch isn't excluded either, so there's a clear advantage to keeping initial ground track over US terra firma, or at least also Canada and later Alaska or Greenland with retrograde or polar orbits, where any such espionage attempts would be easier to detect and deal with, while they might prove impossible or risking an incident in the international waters.

Launches from Vandenberg AFB do not go over land, they either fly South or South-West for polar orbits or West for retrograde orbits (which is rarely ever done).

It depends on what your goal is. In the case of the Air Force, many of their satellites are designed to be in polar orbits. In that case, California offers a few benefits:

11
Is Cape Canaveral the ideal launch location in the US?
7
When launching from the west coast of the USA (VAFB) where do lower stages land?

6
Any chance of seeing a vertical launch of an orbital launch vehicle in UK in the not-too-distant future?
6
What is the highest inclination orbit ever attained from a Cape Canaveral launch?
2
Is there a significant difference between launching a polar orbit mission south from New Zealand versus launching it north?
9
What benefits can be gained from launching below ground?
8
Are there any dog-leg hot-spots? Where are dog-leg maneuvers used most frequently?
16
Are there any known reasons why there are no spaceports in the European Union?
5
Are there any references about rocket Launchapd Design?