Is a solar free-return trajectory possible?

I'm coining a new phrase: "Dyson circuit". Is it possible, with current solar orbital capabilities (see Parker Solar Probe), to drive artificial satellites in a free-return trajectory around the Sun?

As a second part to this question, would that make it possible to harvest excess kinetic/radiation energy from this "circuit"?

Is it possible to drive artificial satellites in a free-return trajectory around the Sun?

No. Getting a satellite close in to the Sun takes a lot of energy.

Parker Solar Probe used the biggest rocket available to get a really high-speed launch, and then:

Parker Solar Probe will use seven Venus flybys over nearly seven years to gradually shrink its orbit around the sun, coming as close as 3.83 million miles (and 6.16 million kilometers) to the sun, well within the orbit of Mercury and about seven times closer than any spacecraft has come before.

So a high-speed launch plus a bunch of gravity assists to get to a highly elliptical orbit with an aphelion near Venus: 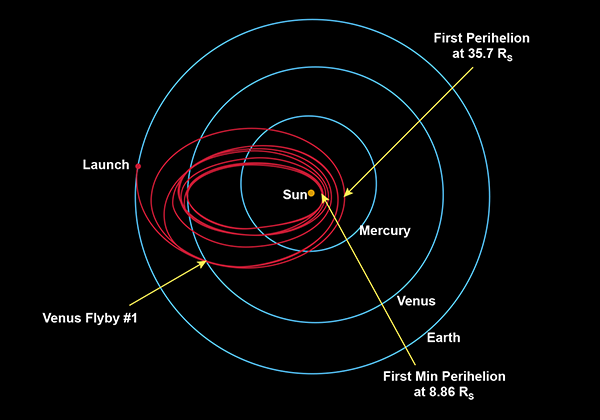 The Parker Solar probe is in an elliptical orbit around the Sun.

tl;dr: To the narrow question:

Is a solar free-return trajectory possible?

Yes, a trajectory that starts near the Earth, goes around the Sun, and returns to a place near Earth is possible.

I'm not an expert but let me try to clear up some points though:

So I think you are looking for periodic solutions, and there are certainly quasi-periodic 3-body orbits that can pass alternately near the Sun and near the Earth. In reality perturbations would not allow these to be quasi-periodic for very long, but at least they could be station-kept.

From this answer to the question What sort of orbital elements are used to describe halo orbits?:

The extremely cool and colorful paper E. J. Doedel et al, (2007) Elemental periodic orbits associated with the libration points in the circular restricted 3-body problem International Journal of Bifurcation and Chaos 17, 2625 (2007). https://doi.org/10.1142/S0218127407018671 builds a system of illustrations that show all of the known, periodic, orbits in the CR3BP (Circular Restricted Three-Body Problem). This includes many kinds or classes of orbits but excludes Lissajous Orbits because they are not in general periodic. (note: ignore the drawing in the Wikipedia article!)

You can and probably should also download the paper from its non-paywalled ResearchGate site, make some coffee, then spend six months enjoying it.

Here are some 3-body orbits that might do the job you are looking for. As mentioned, in the real world you would have to include some station-keeping to maintain the orbit over time. The images are in a rotating frame.

These are schematically drawn, when you change to the much larger mass ratio of the Sun-Earth system, the shapes will change.

It's not a coincidence that these two resemble the two cis-lunar co-planar free-return orbits in the last plot below! 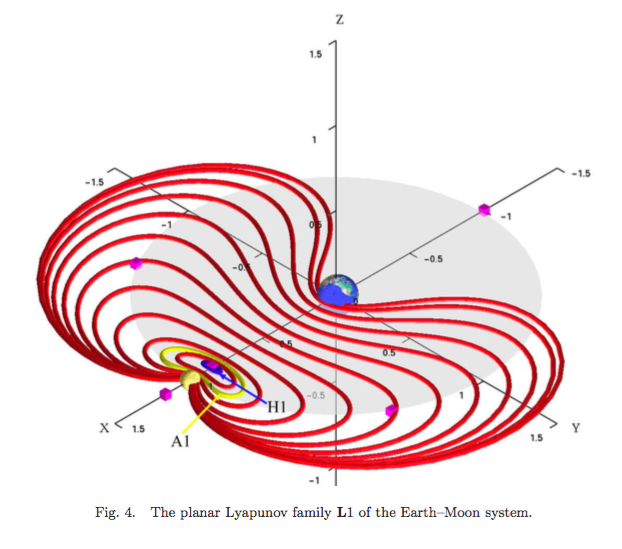 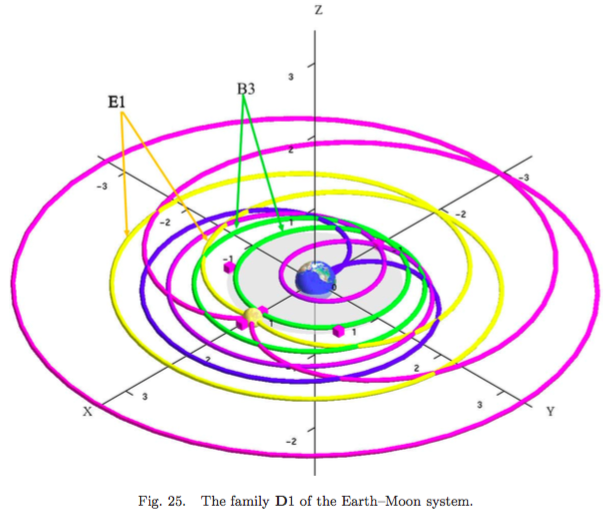 Below are four free-return trajectories starting from Earth orbit and swinging past the Moon. These are drawn in a rotating frame of reference so that both the Earth and Moon are pinned to the x-axis of these plots. These are from NASA Technical Note D-1833; Trajectories in the Earth-Moon Space with Symmetrical Free Return Properties written in 1963 by Arthur J. Schwaniger at the George C. Marshall Space Flight Center.

In the paper, a free-return is defined:

For manned exploration the first flights will very likely be such "fly-by" trips with no plan for landing on the moon. Indeed, when the manned mission is to land on the moon's surface, a "free return" trajectory may be used so that if unforeseen difficulties arise which would make landing undesirable or impossible (particularly a failure of the propulsion system to brake the vehicle speed so as to make landing possible) the astronauts will return safely to the earth.

They're called symmetrical because the 2nd half is nearly a mirror-image of the first half.

There are certain combinations of injection altitudes and velocities that can produce periodic or cycler-like behavior but in general these will not approach the Moon very closely.

In a non-rotating frame I think that the 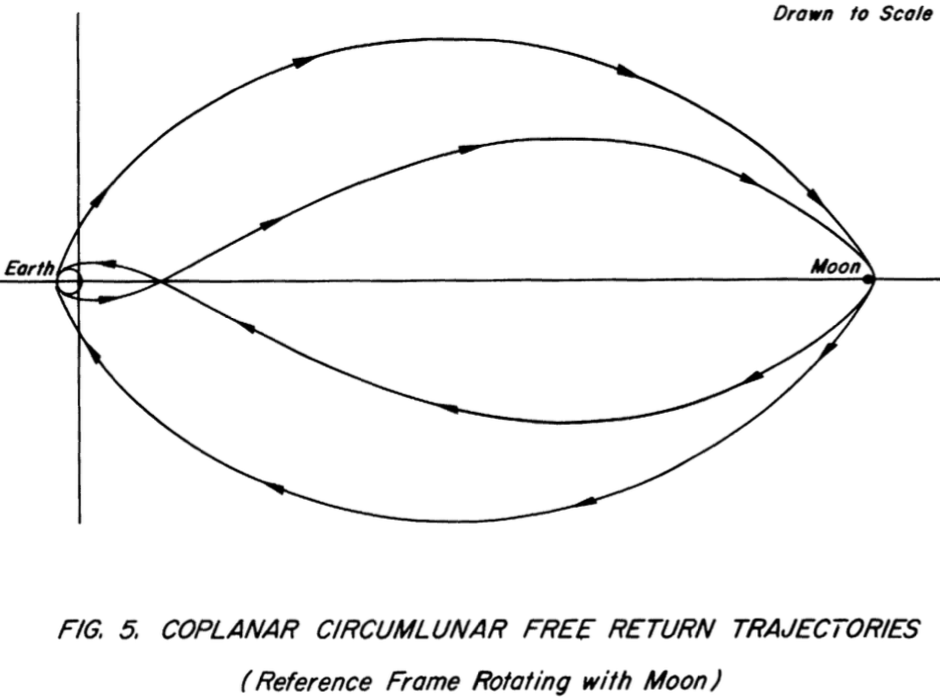 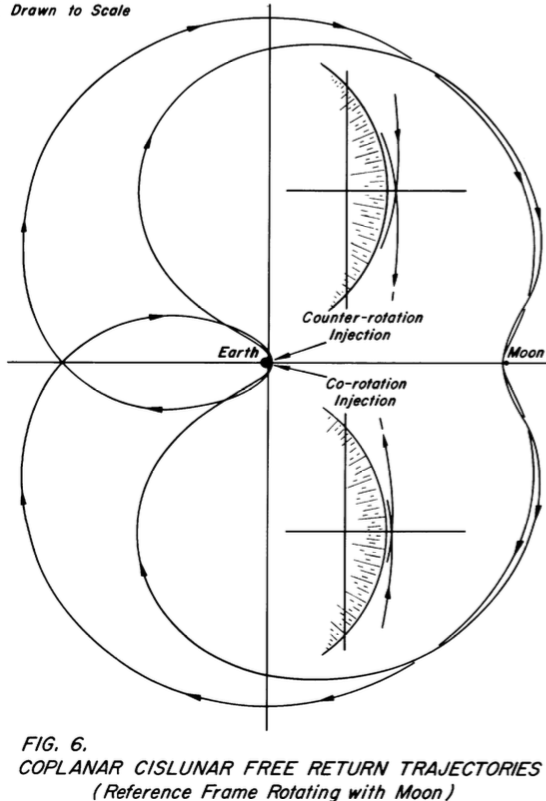 Not the answer you're looking for? Browse other questions tagged orbital-mechanics the-sun astrodynamics parker-solar-probe or ask your own question.

4
How would a Jupiter flyby have helped to get to the Sun? Why was it later ruled out?
11
What sort of orbital elements are used to describe halo orbits?
1
Free Return Transfer Problem

6
Soft landing by gravity assist?
6
How much accuracy is required to achieve interplanetary orbit without adjustment or deceleration?
8
Lunar Free Return Trajectory Simulation
16
Why was TESS' launch window open for only 40 seconds per day?
11
Is it possible to reach the Sun without expending any fuel/reaction mass?
4
How would a Jupiter flyby have helped to get to the Sun? Why was it later ruled out?
6
Does Kerbal Space Program have a software migration path to Lagrange points, halo orbits, and other 3-body goodies?
8
How is Parker Solar Probe so robust against coronal mass ejections?
3
Are there some three-body orbits that can't be escaped? Can we know without propagating forever?
5
Speed at aphelion is decreasing for Parker Solar Probe with each new orbit despite being closer to the Sun