How were scientists able to experimentally confirm that Saturn's ravioli-shaped moons had highly porous surfaces?

The new research, from data gathered by six of Cassini's instruments before its mission ended in 2017, is a clear confirmation that dust and ice from the rings accretes onto the moons embedded within and near the rings.

Scientists also found the moon surfaces to be highly porous, further confirming that they were formed in multiple stages as ring material settled onto denser cores that might be remnants of a larger object that broke apart. The porosity also helps explain their shape: Rather than being spherical, they are blobby and ravioli-like, with material stuck around their equators.

"We found these moons are scooping up particles of ice and dust from the rings to form the little skirts around their equators," Buratti said. "A denser body would be more ball-shaped because gravity would pull the material in."

Question: How were scientists able to "(find) the moon surfaces to be highly porous"? I can understand that this can be hypothesized, but it sounds like there are measurements that show the surfaces to be porous, rather than just rationalizations.

I'm not asking why it is likely to be true, there seems to be measurements that confirm this.

From Phys.org's New close-ups of the mini-moons in Saturn's rings and the original is in the new and paywalled paper in Science Close Cassini flybys of Saturn’s ring moons Pan, Daphnis, Atlas, Pandora, and Epimetheus: 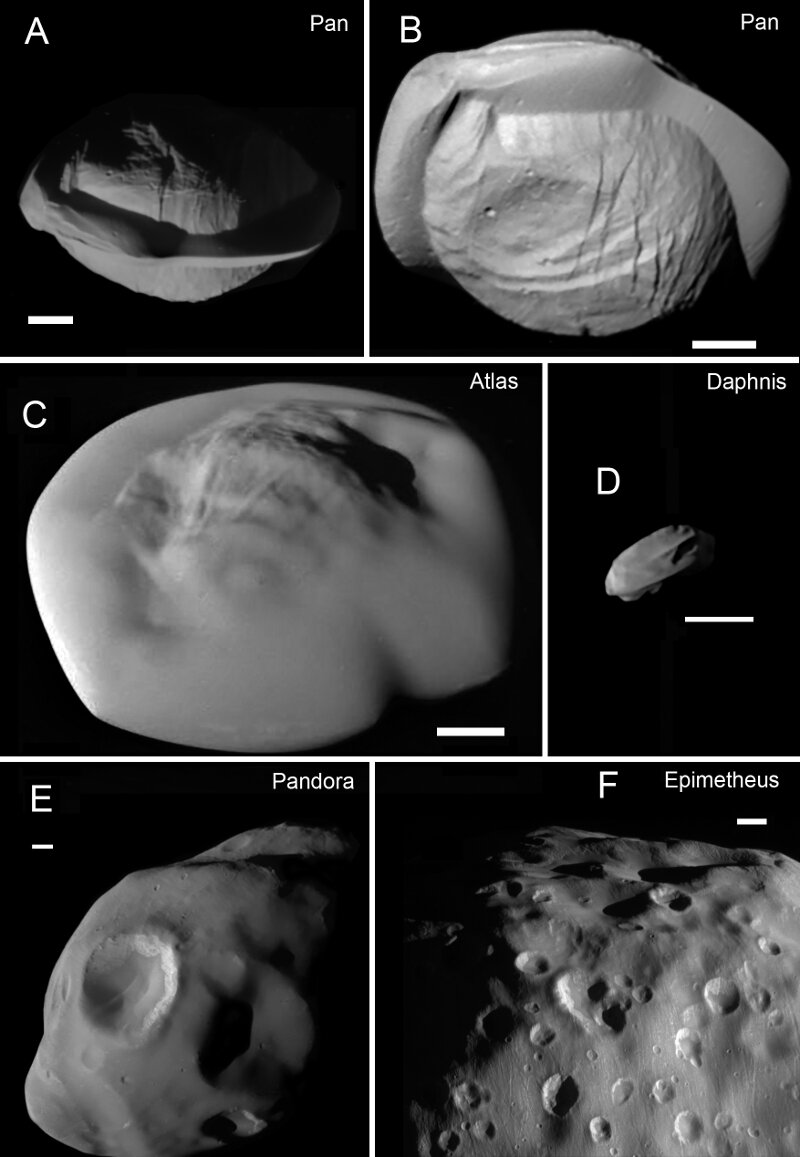 Converting my comments to provisional answer.

"Saturn's Small Inner Satellites: Clues to Their Origins" by C. Porco et al. - this article in Science is paywalled, too, but pictures from the article are accessible with captions, as well as tables.

From table there (mass and density):

From caption of the table:

Masses are determined from orbital integrations [i.e., satellite-satellite perturbations (27)] or, for Pan (9) and Daphnis (32), from the effects of the moons on the rings.

So, the authors are rather precize about densities, with relatively small error bars. And the densities obtained are far below than density of water ice. So the moons should be porous.

Here is Figure 3 from the article:(link)

In caption to the picture the authors say:

Modeled gravitational topography for the ring-region moons Pans, Atlas, Prometheus, and Pandora, assuming core and mantle densities of 0.9 g/cm–3 and 0.15 g/cm–3, respectively. The figures are based on the appropriate spin, tidal forces, and potential energy at the surface. Left panels show magnitude of surface accelerations. Rights panels show gravitational topography, which is the potential energy (relative to the south pole) divided by an average acceleration. Views, from left to right, are of the Saturn-facing, leading, anti-Saturn, trailing, northern, and southern hemispheres.

The recent Cassisni observations by 2017 updated the moons' shapes and densities, but did not make much difference, I suppose.

Nevertheless, the average densities (0.4 - 0.5 g/cm^–3) are results of direct observations.

That's I could find. If somebody can write better answer than myne I would be glad to read.

Another curious observation - if I read correctly Pan just can't accrete more dust from the rings because its outer parts are already beyond Roche lobe. (see Table in the article)

Not the answer you're looking for? Browse other questions tagged planetary-science moons saturn or ask your own question.

9
Why would Cassini need to reach 64 degrees inclination before "threading the needle"?