The working principle is a simple one (see picture below). This grinding machine would be located at the stern of the spacecraft. Metal shavings flying off of the grinding wheel of this grinding machine would produce a propelling force for the spacecraft via Newton's Third Law of Motion. The amount of propulsion produced at any one time would be achieved by increasing/decreasing the rotational speed of the grinding wheel.

The electrical source for the electric motor of the grinding machine could be a small nuclear power plant on board the spacecraft. The 'fuel' source could be long steel rods or large rocks. A source of rocks could be obtained by mining an asteroid field or a small moon. Lastly, I think that diamond grinding wheels would probably be the most ideal to use due to their durability and longevity. 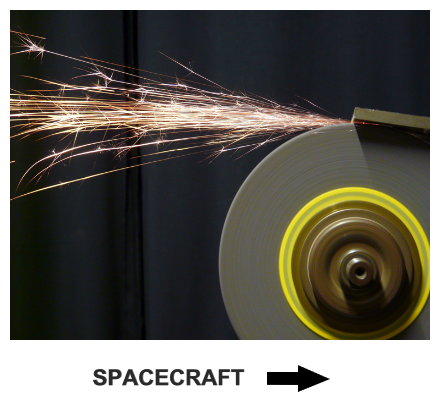 The main engineering challenge in implementing your proposal is that in order to be competitive with a chemical rocket engine, the grinding wheel must rotate at an extremely high velocity. A typical chemical rocket might have a specific impulse between about 250 and 450 seconds; therefore, the exhaust velocity is about 2500-4500 m/s. In a competitive propulsion system, the edge of the wheel must move at least this fast.

So the real question is: can we build a grinding wheel strong enough to rotate at this velocity without exploding?

For now, the answer is no. The tensile stress at the edge of the wheel is $\rho r^2 \omega^2 = \rho v^2$, where $\rho$ is the density, $r$ is the radius, $\omega$ is the angular velocity, and $v$ is the velocity. Thus, the velocity at which the edge rotates is limited to $v < \sqrt{TS / \rho}$, where $TS$ is the ultimate tensile strength of the material the grinding wheel is composed of. Of all materials that we currently know how to produce at macroscopic scales, carbon fiber has the highest ultimate tensile strength per unit mass at about 4000 kN-m/kg. This gives a maximum velocity of 2000 m/s. This is less than the exhaust velocity of even a simple, relatively inefficient chemical rocket.

However, suppose that someone invents a way of mass-producing carbon nanotubes with an ultimate tensile strength of 60 GPa and a density of 1 g/cm$^3$. Then we could theoretically achieve an exhaust velocity of over 7500 m/s, which is excellent. In this scenario, your grinding wheel actually starts to look like a really good idea.

I don't know if it has ever been considered by anyone.

In my view, this is not a good idea for at least the following reasons:

Still, I like this question for thinking out of the box. On a side note, reading the title reminded me of this passage of J.D. Clark's book "Ignition!":

F.A. Tsander in Moscow [...] had suggested that an astronaut might stretch his fuel supply by imitating Phileas Fogg. When a fuel tank was emptied, the astronaut could simply grind it up and add the powdered aluminum thus obtaining to the remaining fuel, whose heating value would be correspondingly enhanced!

I think this was actually tried, but found not to work well because the Aluminium particles take too long to combust, i.e. they continue to burn after they have left the combustion chamber. (Some?) Solid rocket propellants are based on Aluminium, though, but that's different.

Edit: The recent news about dangerous space debris made me think about this question again. Thus, I'm throwing in a third disadvantage of grinding propulsion: it would produce tonnes of untrackable, high velocity particles with stochastic motion characteristics. Sure, one could take some care as to minimize the expected hazard. But with thousands of additional satellites being placed in orbit within the next decade, it might be dangerous to use grinding propulsion in Earth orbit.

The forces involved in spinning a wheel at high speeds are enormous. At 1600 km/h rim speed, the wheels on the Bloodhound SSC experience 50,000 G. Even the slightest imbalance (from, say an abrasive particle coming loose) would be catastrophic.

Even if feasible materials-wise, I suspect energy efficiency would be horrible. To spin something fast, where is that (rotational) energy going to come from? If you use an electric motor, you could just modify it to make a plasma drive and use it (more) directly. In your device a lot of that energy gets turned into heat (of the wheel) by friction. Presumably you could recycle that heat to a large extent, but the stuff to do that is already adding another layer of complexity.

Propulsion comes from acceleration of a reaction mass.

In this case the grinding wheel serves two purposes:

As @Muze points out using a matched pair of counter-propagating spinning wheels would be important in spaceflight as well.

Step 1: requires a large amount of work and there's no reason to do that in space. You can produce the particle on the ground, so your propellant "tank" would be a feed system dispensing pellets or powder. They could be suspended in a fluid for easier feed and to avoid electrostatic clumping.

If you have to produce it in space, for example if you are reusing your lower stage as a reaction mass Horace style (Monty Python reference), then you can grind or otherwise form at a lower speed first with a separate wheel. Particles could be remelted in order to make them spherical, and then size-sorted for the following step.

Step 2: would conceptually be accomplished with a mechanism similar to that of a tennis ball launcher. Two counter-propagating wheels with the particle feed introduced in the small gap between the two wheels' surfaces. The particles would have to be monodipserse, meaning all of a fairly uniform size, and slightly smaller than the gap for good friction. Either the particles or the wheels would have to be elastically compressible enough so that there's a good grip for acceleration, and yet the surfaces should not be readily damaged during the process.

You could also very slightly incline the wheels such that if you had a sorted range of particle sizes they can all be introduced at the appropriate gap width.

However, as @Greg points out and then @ Thorondor demonstrates quantitatively, getting your wheels to spin at mach 10 or faster (for a (mass-)specific impulse or Isp of say 300 or so) is a real materials problem.

One possibility for propellant would be a maximal concentration (essentially HCP) liquid suspension of latex or polymer spheres which can be obtained highly monodisperse with sufficient money. If you don't have a lot of room for propellant, then perhaps metallic or metal oxide or nitride nanospheres can be produced by pyrolysis. 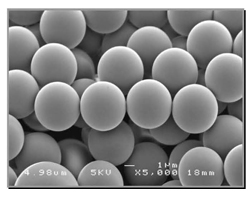 GIF from Tennis ball machine DIY - part 1 a better view of a similar mechanism can be seen in Tennis Tutor Ball Machine mechanics in operation.

The big challenge will be the forces on the outside of the wheel, ripping it apart.

We have to pin the numbers to something, and the easiest number to pin down would be the angular velocity. Zippie style uranium enrichment centrifuges operate around 1,500 revolutions per second, so they make a good benchmark. (Some turbochargers go faster, up to 4,800 revolutions per second, but they are rather small diameters, so easier to manufacture). 1500 rev/sec is about 9500 rad/sec. Since $v=r\omega$, we can solve for the radius of the wheel, $r=\frac{v}{\omega}$. Let's target a rather low velocity: 500m/s. Chemical rockets have exhaust velocities in the 2500-4500m/s range, but we can target a lower rate because we can always fuel up later. That pegs us as needing wheels on the order of 50cm in radius.

The exact structure of a Zippie style centrifuge is a closely guarded secret, but Wikipedia gives a notional centrifuge size of 20cm or smaller. This means our wheel is going to be withstanding forces roughly four times that of a nuclear enrichment centrifuge. Now mind you those centrifuges are carefully managed, sealed in vacuum chambers and levitated on magnetic bearings. The forces of accelerating mass with the edge of one of these wheels is going to be far greater. More importantly, they will be off axis, which is always tricky for a centrifuge.

So the material properties we need push the limits of what is used in enrichment centrifuges, just to get to one tenth of the ISP of a rocket. So the real question will be, are there mission plans where 1/10th of a rocket's ISP is useful, but where other technologies are insufficient.

A huge amount of energy would be wasted in the grinding process. Only a tiny fraction would be converted to kinetic energy: the rest would be wasted as heat, plus your grinder would wear down and you would have to have all sorts of complicated mechanisms to keep the thing running.

You could reduce the wear and the energy required to grind off the particles by using a weaker material.

But then you could just decide to not grind the particles off in the first place and throw powder out the back using a spinning wheel without the need to grind it.

But then you can just ionize the powder, eject the particles with an electric field and get rid of the wheel completely. It would be a lot more efficient.

Then you could replace the powder with xenon for more efficiency.

And now you have an ion drive and we already have those.

There are two considerations: one is ISP, which is discussed in several of the answers. The other is energy efficiency - how many joules of input energy end up converted to kinetic energy in the expelled propellant mass.

If you consider a typical rocket, energy efficiency is surprisingly high - IIRC something like 70% of the available chemical energy is converted to kinetic energy of propellant mass ejected along the thrust axis (the remainder is waste heat radiated away or components of propellant velocity perpendicular to the thrust axis).

Using a power plant e.g. nuclear to create electricity to drive a motor involves multiple conversion steps, each of which incurs losses. To begin with, a nuclear reactor itself creates heat which has to be converted to mechanical work (at best about 40% efficient IIRC) which is then converted to electricity (maybe 80%-90% efficient) and then to mechanical (again maybe 80%-90%).

Using a nuclear reaction to heat a propellant which you directly expel (nuclear rocket) gets you back to the same sort of energy efficiency as chemical rockets, but higher ISPs because you can potentially achieve higher temperatures.

9
How might SpinLaunch actually spin something fast enough to launch it into orbit?
2
What are all the kinds of electric propulsion that don't qualify as ion propulsion in standard spaceflight lingo?

2
How does Accion System's TILE propulsion module compare to an equivalently sized Hall effect or an Ion thruster?
1
Could a spacecraft be propelled by a 180 degree deflection of two charged particle beams?
5
What might be a viable avenue of propulsion research in aiming for mission delta-V north of 100 km/s?
3
Could a carbon arc lamp help to propel a spacecraft through interstellar space?
3
Could the kinetic energy in the Sun's solar wind power an ion propulsion system for an interplanetary spacecraft?
3
Viability of beamed regolith propulsion?
2
What are all the kinds of electric propulsion that don't qualify as ion propulsion in standard spaceflight lingo?