What are the G forces leaving Earth orbit?

What were the G forces experienced by the Apollo astronauts during the translunar injection burn? Was there a lot of vibrations during the TLI burn?

Is there estimates of the G forces an astronaut would experience leaving Earth orbit to go to Mars?

Earth departure burns can be relatively leisurely, so the acceleration tends not to be extremely high. There is some tradeoff between doing the burn over a short timeframe to maximize the Oberth effect, versus using a smaller, lighter engine and maximizing crew comfort.

At the start of the Apollo TLI, acceleration would be about 0.6g, increasing as fuel mass is exhausted, and finishing up around 1.45g, according to this graph from the Apollo 11 flight evaluation report: 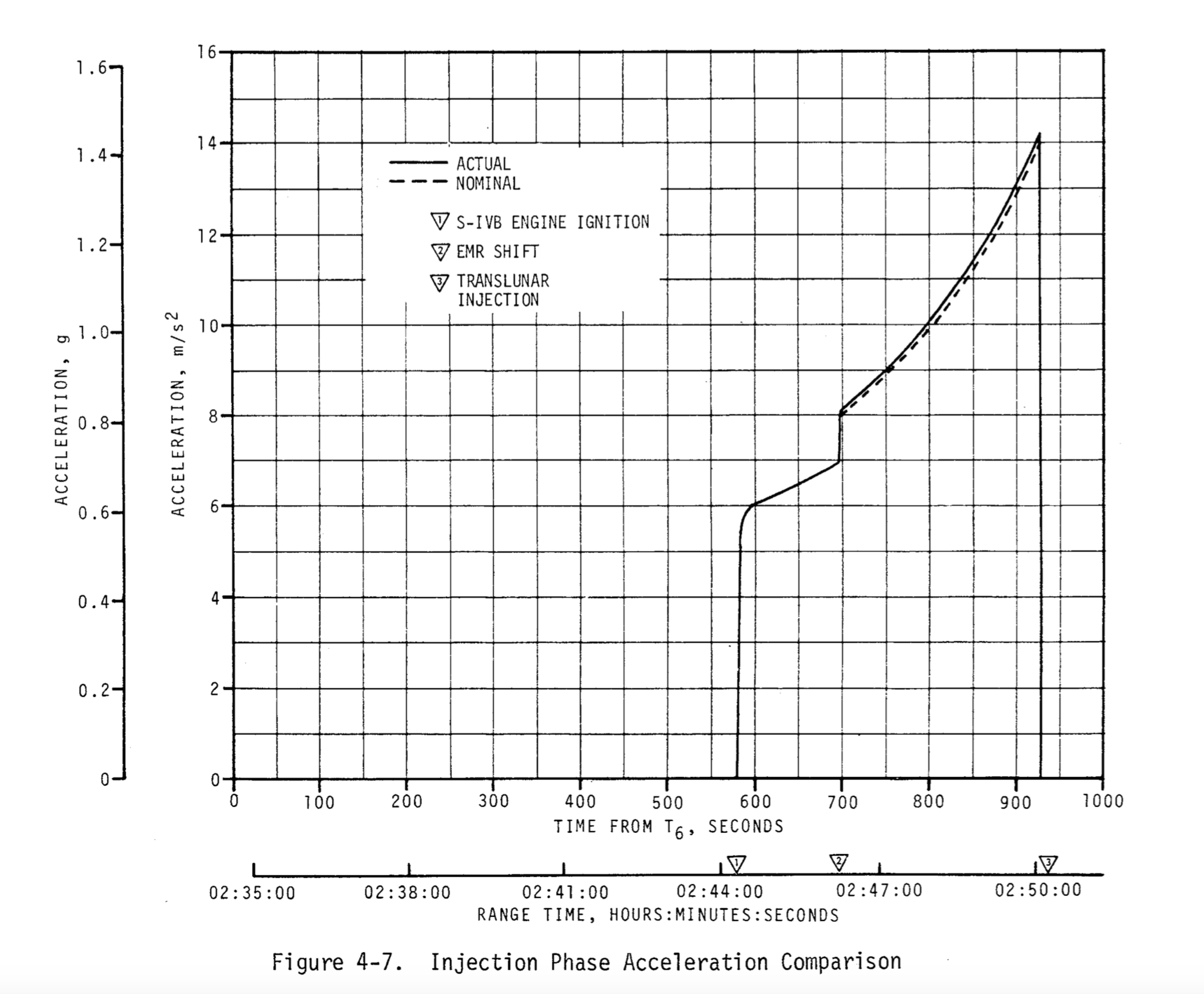 For a Mars mission, it would depend entirely on the design of the spacecraft doing it, but it probably would be comparable.

There was some vibration noticed by the crew during the S-IVB burns. For subjective impressions, the best source is the crew debriefings done after each mission, though in this case they're surprisingly varied.

In the debriefing for Apollo 11, Aldrin said it was a "rougher ride than the S-II" (second stage, which presumably 'averaged out' the roughness of each individual engine across the set of five, and had more structure between the engines and the crew cabin to damp vibrations through) and Armstrong said it was "a little rattly all the time". (These comments were in regard to the orbital insertion phase of the S-IVB but were probably applicable to the TLI as well.)

The crew of Apollo 10 found it a little rougher, with Stafford saying "Where the S-IC stage and the S-II stage were completely smooth, the S-IVB growled, rattled, and rolled during the whole burn. But you could actually feel little vibrations."

Conrad on Apollo 12 was more positive: "S-IVB ignition was smooth. The ride on the S-IVB was very nice."

This image is from Quora because the picture I took from my Saturn V Haynes Manual was too big to upload. Anyway, you can see that the acceleration is by no means constant, but it peaks at just under 40 m/s^2, or around 4g. And it was a wild ride. In particular, when the first burn ended the entire structure, which had been compressed, snapped back. According to the Haynes Manual, astronaut Fred Haise said that when the first stage cut out he thought he was going through the instrument panel.

What were the G forces experienced by the Apollo astronauts during the translunar injection burn?

My Haynes doesn't seem to give specific figures, but the S-IVB had a single engine, and they didn't try to throttle it. So the acceleration would have picked up where the graph above leaves off and increase somewhat as the fuel was depleted. It would also jump 13% when the LOX/LH2 ratio switched from 4.5:1 to 5.0:1.

Space Shuttle, and I believe others like Soyuz, are designed to give a gentler ride, no more than 3g.

For a trip to Mars there would be two stages--getting into orbit, and getting to Mars. Getting into orbit would be like anything, probably around 3g. Getting to Mars would be a lot gentler, but depending on the technology. Like the ~6 m/s^2 of the Saturn's S-IVB stage followed by a lot of coasting--getting off the ground is a big deal, but once you're up there engines would be designed for efficiency rather than thrust. Or something like an ion engine with a barely perceptible acceleration for months at a time. There's nothing close to being ready to go yet, so it's too soon to say.

Not the answer you're looking for? Browse other questions tagged apollo-program escape-velocity trans-lunar-injection or ask your own question.

32
Has in-space refueling been done?
4
Would the Saturn V have been able to send more mass to TLI if it had a lower earth parking orbit?
2
Hypersonic Inflatable Aerodynamic Decelerator entry to Mars' atmosphere
8
How long is the Apollo Lunar Module extraction window?
2
Has any human had the capability of leaving the Solar System?
18
What gave NASA the confidence for a translunar injection in Apollo 8?
7
What is the fate of SLA fairings jettisoned from lunar mission spacecrafts?
26
If I wanted to reconstruct an entire Apollo mission's crewed spacecraft trajectories, what are the key sources of historical data I'd look for?
8
What would have happened if the third stage of Saturn V had exploded during TLI? Could the CM have safely returned to earth?
11
Vibration and noise during launch of the Saturn V and Spaceshuttle in comparison?